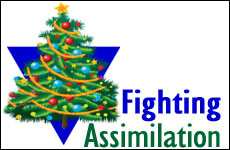 Give American Jews a 'birthright honeymoon.'

It's the unofficial scorecard for American Jewry, and the tally right now is not looking too good. Each Sunday, the New York Times publishes announcements regarding weddings and other "commitment ceremonies."

These brief items, in which the proud couples and their families inform the world about their newfound marital bliss, also serve another important, albeit unintended, purpose: they provide a rich source of anecdotal data about the current crisis of identity that is enveloping many American Jews.

Of course, you can't always tell by the names. But they are nonetheless a pretty good indicator as to just how extensive, and pervasive, intermarriage and assimilation have become in the land of the free.

Week in and week out, there is a steady stream of people with names such as Cohen and Friedman marrying McCarthys or O'Connors, instead of each other.

There are listings for joint ceremonies presided over by rabbis and priests, and then there are ones that are led by special "interfaith ministers," whatever that might mean. Some nuptials are officiated over by rabbis, while others merely involve a local judge.

For some Jews I know, scanning the Sunday Times wedding section has almost become a fixation. Like a sports fan studying the results to see how his preferred team is doing, they check up on how the Chosen Team has fared over the past week.

And most of the time, the results are not encouraging.

Though the number of Jews marrying Jews occasionally exceeds those who intermarry, more often than not the reverse appears to be the case. And this portends a crisis of unprecedented proportions, one that will only worsen over time if drastic steps aren't taken, and soon.

Admittedly, leafing through the matrimonial listings is hardly a scientific way of gauging where American Jewry is headed. But the sad fact is that the findings from this weekly survey match those that demographers have been warning about for quite some time.

Indeed, according to the 2000 National Jewish Population Survey (NJPS), 47% of American Jews who had married in the previous five years tied the knot with a non-Jew. And studies show that over the past four decades, the intermarriage rate has spiraled upwards from single-digits to nearly one out of every two Jews getting married.

And even those Jews who still do marry within the faith aren't entirely immune from an erosion of their identity.

Take, for example, an article that appeared in the Times a few days ago by Cindy Chupack, who was a writer and executive producer of the hit television series Sex and the City.

With nary a bit of shame, she describes quite exuberantly how she and her husband, "two newlywed Jews," decided "to embrace" Christmas, buying themselves a tree and decorating it with all the trimmings.

"Some nights," Chupack writes, "I put on our Starbucks Christmas CD, light a fire, turn on the tree and play with the different settings, put liquid smoke in the train's smokestack and turn on the choo-choo sound effects and then I sit back and enjoy my first Christmas, in all its kitschy splendor."

The crisis facing American Jewry is real and it is profound, and it is only growing worse from year to year.

After reading this, all one can say is: Gevalt. The crisis facing American Jewry is real and it is profound, and it is only growing worse from year to year.

Decades of neglect, and of failing to invest in Jewish education and Israel programming, have produced a generation largely cut off from its roots.

Indeed, the recent debate that has erupted over the actual size of American Jewry is largely beside the point. A study published in the 2006 American Jewish Yearbook now claims there are 6.4 million Jews in the US, which is higher than the 5.2 million estimated by the NJPS.

Five million or six million -- what does it really matter, if most are assimilating or intermarrying in any event? The crisis right now facing American Jews is more one of quality rather than quantity, of keeping Jews Jewish rather than bean-counting.
But all is not lost, and submitting to despair won't help to bring back any of our people. What are needed instead are some bold new initiatives that will re-engage young American Jews with Jewish life and with Israel.

One of the most successful such efforts has been the birthright israel program, which brings young Jews aged 18 to 26 for their first visit to the Jewish state.

Launched by a team of visionary philanthropists, including Michael Steinhardt, Charles Bronfman and Lynn Schusterman, this blessed undertaking has reconnected untold thousands of young Jews with their community and their heritage.

I suggest that it's time to replicate this success and take it one step further, and to create a "Birthright Honeymoon" for every American Jew who weds.

The idea is very simple: the American Jewish community would give every Jew who ties the knot a free 10-day trip to Israel to be used within the first year of marriage.

All American Jews, regardless of whom they marry, would be eligible to participate, with the goal being to spark their interest in all things Jewish as they set out to build a family.

Rites of passage, or life-cycle events such as marriage, present a great opportunity to reach people who are otherwise disconnected from the Jewish community and from their heritage.

Offering every American Jew a free "honeymoon in Israel" will not only help to strengthen their ties and sense of identification with the Jewish state, but it will also have an enormous impact on the kind of home they fashion and the children that they raise.

Sure, the financial and logistical challenges of launching such a program are immense. But those are not reasons to shy away from doing it, because the alternative is continued communal drift and decay.

It is not too late to influence thousands of young new Jewish husbands and wives across the US, and to draw them closer to their roots.

Of course, getting them to visit Israel is not a catch-all solution, and much more work will need to be done.

But based on birthright's experience with college-age and post-graduate youth, it certainly seems like a good place to start.

Exploring Jewish Identity in Hungary
What Makes Eli Run?
The Tyranny of Materialism
Science Enters the Mysterious Inner World of Consciousness
Comments
MOST POPULAR IN Israel
Our privacy policy