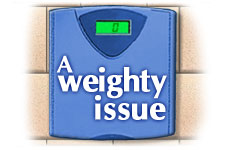 An obsession with dieting is not a Torah value, but neither is preoccupation with food. The challenge is striking a balance in today's fat-conscious world.

We promised ourselves we'd be different. My girlfriends and I spent hours strategizing. Our daughters would not grow up with the weight obsessions that we were subjected to. The word "fat" would never defile our lips. The word "diet" would be taboo. And that awful symbol of man's inhumanity to man, the bathroom scale, would never cross our thresholds.

We promised: that awful symbol of man's inhumanity to man, the bathroom scale, would never cross my thresholds.

Yet even as I sit here and fantasize about living in an era when the goal was to look "like a rich man's wife with a proper double chin," I know we've failed. The world around is too powerful, the values too pervasive.

My young children play games sticking out their stomachs to pretend to be fat. My older ones don't play; it's already serious business for them, and my thinnest daughter gets too much attention for it. They talk about it at the Shabbos table and in the halls of their school. When relatives come to visit it's frequently the first thing they comment upon. No one is immune.

WHEN ENOUGH IS ENOUGH

My husband has a theory that children are naturally self-regulating and that without direction they will choose the appropriate foods. While I don't agree entirely, I do see that the old adage about children's eyes being bigger than their stomachs frequently rings true. And I've noticed that even though my kids may heap their plates with dessert, they often leave it half-eaten.

They stop when they're full.

This is an amazing concept. To stop when you're full.

Maimonides, suggests that we should stop eating when we're two-thirds full -- a prescription for a healthier physical and spiritual life. For I think we all recognize that our ability to grow, to reach out to others, to focus on transcendent issues, is not unconnected to our physical state of being.

If we're cold or tired or hungry, it's hard to concentrate on loftier matters. And conversely, it's difficult to soar in the spiritual realm when our bodies are weighted down by that extra piece of chocolate cake, coming closely on the heels of those second helpings of chicken and mashed potatoes.

It's difficult to soar in the spiritual realm when our bodies are weighted down by that extra piece of chocolate cake.

Why didn't we stop? I have observed that around adolescence our internal controls start to betray us. No longer is the goal of eating to satisfy a physical need, and in so doing give us strength for spiritual endeavours, the goal becomes the food itself. The goal becomes the delicious taste, not the material sustenance.

For some adults and children, this article is irrelevant. Their metabolism gets them through. My husband is one of those people and he seems to arouse envy all around. But why is that? Why are we allowing ourselves to fall prey to these values and sentiments?

When we see an ad for a BMW telling us that "you're looking at 3,000 pounds of life-goal fulfillment," we turn away in scorn. So why do we buy the "thin is in" slogan in its latest incarnation?

But our children must also know that the Almighty made His people in all shapes and sizes and that the one they have (assuming they don't abuse it) is the right one for them. And no billboard, magazine cover, or diet pill will change that.

We want our children to fuel their bodies so that they can function to their utmost potential, so that their spirits can reach the stars. And as long as they are doing their best, then we have to teach them to ignore those words and ideas we can't keep from seeping in.

Forget about burning bras; I think true liberation stands on an ash heap of bathroom scales.

My Mother, My Child

Surveillance
Blessing on Chewing Gum
Was Rahab a Prostitute?
Extras In Our Own Epic
Comments
MOST POPULAR IN Family
Our privacy policy