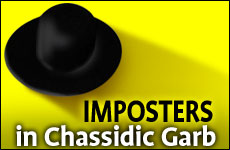 These insane Jews embraced the disciples and followers of their ancestors' murderers and have been spit out by the Torah world.

One need not attribute the decision to splash a large photo of a Jew in hassidic garb kissing Mahmoud Ahmadinejad at the conference of Holocaust denial in Teheran last week to a desire to cast Torah Jews in a repugnant light. What photo editor could resist such an eye-catching shot?

But I will confess to a certain resentment at feeling forced to disavow a handful of clowns who cannot claim the support of one Torah authority for their actions and who have been spit out by the entire Torah world. The Satmar leadership in Brooklyn put it succinctly: "[Those who went to Iran] trampled on the memory of their ancestors and people. They embraced the disciples and followers of their murderers."

Ha'eda, the official organ of the fiercely anti-Zionist Eda Haharedit, characterized those attending the Teheran conference as a "tiny group of insane people, who are liable to incite hatred against hareidi Jews." The paper's editor, Rabbi Shmuel Pappenheim, lambasted them for having ignored the "opinion of the Torah Sages" in pursuit of their distorted anti-Zionist zealotry.

Ahron Cohen of Manchester, England, one of the attendees at the Teheran conference, has been sent a letter informing him of his expulsion from the hevra kadisha (burial society) to which he belonged, and requesting that he not show his face in the vicinity of Machizkei Hadas, the largest haredi shul in Manchester. He has also been told that he is persona non grata in the Satmar beit medrash (study hall) of Manchester. Rav Elchonon (Huna) Halperin, the senior figure in the haredi community of Golders Green in London, has issued similar instructions for his beis medrash.

Nor was this stance anything new. More than a quarter-century ago, Rabbi Chaim Shmuelevitz, the rosh yeshiva of the Mirrer Yeshiva in Jerusalem, ordered Moshe Hirsch, the self-proclaimed "foreign minister" of a tiny splinter sect of Naturei Karta, out of the Mirrer beit medrash. And a joint statement by Satmar and other American hassidic groups last week noted that these "evil associates of our enemies" were "ejected from our shuls and communities decades ago."

Rabbi Elazar Schach said many times that just as one who denies one mitzva of the Torah is classified as an apikorus or heretic, so is one who elevates any mitzva (or supposed mitzva) of the Torah above all others. At a 2002 Hamas rally in Washington D.C., a speaker dressed as a hassid justified using a microphone on the grounds that destroying Israel supersedes the prohibitions of Shabbat.

But even were this tiny group that turns up at every anti-Israel rally where there are likely to be cameras scrupulous in their observance of Shabbat, their behavior would mark them as imposters posing as religious Jews. Only a Jew driven mad by hatred of Zionism and the state of Israel could ever join hands with the greatest butchers and would-be butchers of Jews in modern times. Documents captured in Operation Defensive Shield in 2002 show Hirsch to have been on the payroll of Yasser Arafat, whom he publicly embraced on many occasions.

Decades ago, Hirsch was chosen to be "rav" of the Purim shpiel in his American yeshiva, and he has been playing the part ever since, long after the joke turned sour. Once aroused, the love of attention, even negative attention, is hard to curb.

"The seal of the Holy One, Blessed be He, is truth," say our sages. Yet those who traveled to Teheran last week willingly and knowingly gave credence to the greatest lie of modern times.

The leading theological opponents of Zionism never mistook the enemy of their enemy for their friend. Mayor John Lindsay once paid a campaign visit to the late Satmar Rebbe, Grand Rabbi Yoel Teitelbaum, the fiercest ideological opponent of Zionism. After the meeting, the Satmar Rebbe explained why he had not said a word against Israel: "When a gentile hates Israel, he hates Jews."

Nor did a theological opposition to Zionism ever detract from a concern with the physical well-being and security of the Jews of Israel. Agudath Israel from its inception was anti-Zionist. Yet Rabbi Moshe Sherer, the long-time president of Agudath Israel of America, often said that he took a second-seat to no one when it came to the security of Israel.

He repeatedly placed his web of congressional contacts at the service of Israel's leaders. At a June 17,1970 meeting in the Israeli Embassy in Washington, for instance, Rabbi Sherer offered ambassador Yitzhak Rabin "our help in whatever way we could be used."

Even Agudath Israel's general policy against making common cause with non-Orthodox groups gave way when it came to Israel's security. Thus Agudath Israel found a way to participate in a general protest demonstration in front of the UN against the grant of permanent observer status to the PLO.

In this regard, Rabbi Sherer always quoted the words of his mentor, Rabbi Aharon Kotler, during the Holocaust. When some questioned Rabbi Kotler's readiness to join forces with Reform leader Stephen Wise for rescue, Reb Aharon replied, "I would work with the pope if it would save even the fingernail of one Jewish child."

Passionate concern with every Jewish life has characterized every Torah leader throughout the generations. Those who provided aid and comfort last week to a madman who has repeatedly threatened to wipe Israel and its five million Jewish citizens off the map demonstrated thereby that they have no place in the camp of Torah.

Israel Is Just a Dream

The Heart-Rending Cry
Near Death Experience Panel
The Western Wall: The Heart of the World
Ask the Right Question: Tisha B’Av
Comments
MOST POPULAR IN Israel
Our privacy policy
Aish.com Is Looking for Great Writers