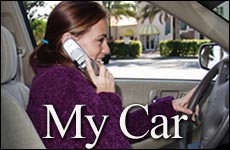 It's been an office, phone booth, dining room, and hair and make-up salon. Last week I got a wake up call that changed all that.

Over the years my car has served many purposes. It's been an office, phone booth, dining room, and hair and make-up salon. I have even been known (embarrassingly) to do my nails at red lights. Last week I got a wake up call that changed all that -- I hope for good.

During the busiest and most intense week of my year I decided to stop in at 7-11 for a slurpee. As I approached the counter to pay, I heard a commotion outside and people screaming, "Whose car is that?!"

I ran out and a friend who was in the parking lot (coincidentally?) directed my gaze across the street. There was my SUV, on the opposite corner of a busy intersection, with one end protruding out at an awkward angle and the other smashed into a brick wall.

In my haste to get back to the office, in my frantic and preoccupied state, I did not set the brake. Since my car is a stick shift it rolled down to the bottom of the parking lot, jumped the mini barrier, hurtled across both streets of the intersection and crashed into the wall that acts as a retainer for a strip mall parking lot on the opposite corner.

I just stood there shaking, looking at my car and not believing that it flew on its own through a huge intersection in the middle of rush hour. My friend took my keys from me and went to retrieve the car since I was in shock and incapable of movement.

Initially everyone around me seemed very angry, but once I took responsibility, their attitudes changed. Everyone began calling out to me, relating how close it came to either pedestrians or their cars, and how lucky and blessed I was. One woman said that when she saw there was nobody at the wheel of the car, she held down her horn so people would pay attention. An older man that was standing in front of the wall jumped away just as the car hit. Another told me that it missed her car by less than a foot.

It's an absolute miracle that my car didn't cause an accident, hit any cars, or, thank God, any pedestrians! If the car had not turned and gone corner to corner but instead would have gone straight, it would have smashed into a park fence where many children were playing. What if that wall wasn't there and it went right into one of the stores in the mall? The terrible possibilities are almost endless and totally mind boggling.

I went back into the 7-11 to pay for the drink I had already poured. The manager looked at me and said, "Lady, I don't know who your God is, but you better go home and pray to Him!"

Three days before this happened, the rabbi of my synagogue spoke for 20 minutes about our lack of safety consciousness when it comes to driving and walking. He talked about the fact that we do too much while we drive, and don't pay attention to other cars that may be erratic. The leading cause of death and injury in people 15 - 24 is motor vehicle accidents. And that is the case throughout the world.

As he spoke I knew I was one of the guilty ones, juggling numerous activities while driving, being oh so efficient. My car is a convenient mode of transportation, but it's also an enormous responsibility. Nobody is a good enough driver to be so busy while they are driving, and yet I have always been so confident. I am thankful that my wake up call came at such a small price. Paying my increased insurance deductible will be easy when I contemplate what could have been.

Talia Rosenthal grew up in both South Africa and Vancouver Canada. In 1997 she sold her business and moved to Los Angeles to work for Aish HaTorah. Talia currently works with Rabbi Braverman at the Jerusalem Fund in Los Angeles.