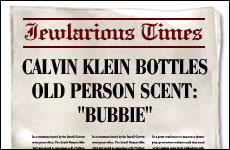 No senior can resist Bubbie's subtle blend of Ben-Gay and meat balls.

After 10 years of research and development, Calvin Klein has just unveiled its new perfume: Bubbie. Company executives explained that the new product launch is designed to capitalize on the much sought after over 80 female Jewish market and they have even enlisted many seniors to assist in the advertising and marketing campaigns.

At a press conference, the spokesmodel for the new product, 82-year-old mother of four and grandmother of "11 of the most beautiful grandkids in the world -- you would just die if you saw them" Ethel Sapperstein expanded, "Bubbie is perfect for just lounging around the house, playing cards, or for meeting that special someone for dinner at the Early Bird Buffet. No senior can resist Bubbie's subtle blend of Ben-Gay and mint chocolate."

Insiders at the perfume manufacturer will be monitoring the success of their new product closely, and based on its results, may launch a companion cologne to go with Bubbie initially slated to be called Eau de Zadie. "We are still in what we call the ‘fragrance development' stage," explained Chief Perfumer Steven Mitchell. "I obviously can't get into specifics but some of the aromas that we are currently experimenting with include whiskey, herring, and shoe polish."

Some of Calvin Klein's competitors are jumping on the senior scent bandwagon and are coming out with elderly perfumes of their own. There are unconfirmed reports that industry giant Channel will soon be launching their own product named Aunt Frieda. As a promotion, each bottle of perfume will come with a five dollar bill and a note attached which will read, "Use the perfume in good health, and don't spend my gift all in one place sweetheart."

PunimBook: Facebook for Jews
The Promise Of The Land
Which Chat Are You On?: Parshas Behar/Lag Ba’Omer
Do You Like Slow-Cooked Food? Thank the Jews
Comments
MOST POPULAR IN Funny Stuff
Our privacy policy