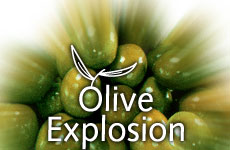 Olives have always been a favorite of mine and I started young. Toddlers can't resist putting them on her fingertips. Olives were the star of every relish tray, leaving crisp but dull celery, carrots and radishes stranded on melting ice cubes, waiting for takers. Here in California, olive capital of the United States, olives whiled away the decade, in the supporting role of relishes, topping a pizza or a guacamole here, an enchilada combo there.

The next time I spotted olives, they were riding into my diet on a wave of nouvelle cuisine. And here they remain, to this day, basking in the glow of all things Tuscan. Of course olives now come in more than black or green, pitted or not pitted. Olives, like 13 channels of black and white TV in the sixties, exploded into colored TV going cable in the 90s.

They varied in size, from piccholine green cracked olives the size of jelly beans with pits like ball bearings, to jumbo Greek purple olives the size of small plums. Dried Moroccan olives, shriveled like richly acrid raisins followed me home from Brooklyn. Kalamata beauties from Greece stowed away in my shopping basket right there in my local Ralph's Market, raising my sodium while sabotaging my budget. The next thing I knew, Kalamata olives with rosemary had become part of my bread vocabulary, working its way over from the artisan bread counter to the supermarket shelves in no time.

Olives have become even huger. Olives have found their way into bottled pasta sauces, salad dressings and sandwich spreads. Caponata and tapenade have become the preferred way to enhance my crostini. Chicken Tagine, Chicken Marbella, and Tunisian lamb shanks with still more olives are cropping up on all kinds of tables, not just mine. Every country with a Mediterranean shore, from Europe to Asia Minor, over to the Middle East and back around to North Africa, has its own host of favorite son olives, not to mention California, olive power house that it is. And that's not even touching upon how many grades, sources, flavors and varieties of olive oils have appeared in the last couple of years alone.

Like any habit, the need for olives is a positive feedback system: The more olives you eat, the more you crave olives. So, while I cannot recommend olives to people who do not yet have a craving for them, I do have some savory recipes for those of us who do!


Drain the olives of their brine and rinse them in a colander until the water runs clear. Place 1/4 of the olives in a tall, 2-liter glass jar. Add 2 chilies, 2 cloves of garlic and a bay leaf, slipping them toward the sides of the jar to display them decoratively, if desired. Repeat until all of the ingredients are in the jar. Add the oil and the vinegar. Seal the jar lid tightly and shake the jar well to emulsify the oil and vinegar. Allow the jar to rest at room temperature for 4 hours. If the lid of the jar has loosened, tighten it. Shake the jar again and let it rest, inverted, for 4 more hours. Repeat this process for a 24 to 36 hour period, until the desired piquancy is achieved. Refrigerate. Will keep refrigerated for up to 2 months.

(Serves 12 as an appetizer)

May be served at room temperature.

CHICKEN TAJINE WITH LEMON AND OLIVES

1. Sauté garlic in oil till golden.

2. Add tomatoes, chicken, turmeric and pepper, cook for 30 minutes till chicken is browned, on all sides.

3. Add the olives to the chicken and then add just enough water to cover. Bring to a boil and then lower to a simmer.

4. Simmer covered for one hour.

5. During the last 15 minutes of cooking add the lemon juice and parsley.

In the work bowl of a food processor, combine all dough ingredients. Start the motor and as soon as the dough forms a ball, continue to process 60 seconds. Remove the dough from the work bowl and place into a large mixing bowl coated with olive oil. Cover loosely and allow to rise 1 ½ to 2 hours or until doubled in size. Turn the dough out on a lightly floured work surface and roll it with a lightly floured rolling pin into a 12 x 18-inch rectangle that is about 1/4 inch thick. To fill, paint 2 to 3 tablespoons of olive oil over the top of the dough -- be sure to brush it thoroughly, even liberally -- and then cover the surface with the olive paste or the tapenade. Roll up the dough from the long end, like a jelly roll. Oil a 10 x 4-inch angel-food tube pan very well and slip the dough into it, seam-side down. Don't be concerned if the 2 ends of the roll don't touch; they will after the dough rises. Cover the pan with a towel and let rise until the dough has doubled in bulk, about 1 to 1½ hours. At least 30 minutes before you plan to bake, preheat the oven to 400EF with a baking stone inside, if you have one. Brush the top of the focaccia with 1 tablespoon of olive oil. Place the pan directly on the stone and bake until golden, about 40 minutes. Let cool for 15 or 20 minutes and then slide the blade of a long thin knife or spatula between the focaccia and the pan sides and the center tube to loosen it. (If the pan has a removable bottom, remove it from the sides, then slide the knife between the pan bottom and focaccia to release it.) Place the focaccia on a rack until ready to serve. Serve warm. Makes one 10 inch focaccia; serves 10.

Recipes for Tu B'Shvat
Korach 5782: Visit to Lift the Spirit
That Time The Ivy League Found A Way To Limit Jewish Enrollment
Would You Rather Be Right or Happy?
Comments
MOST POPULAR IN Tu bShvat
Our privacy policy