My Name Is Mark and I'm a Jewish Date aholic 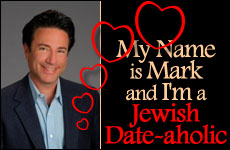 150 coffee first dates have got me addicted to dating and caffeine.

Is there a 12-step program for Jewish singles? If so, sign me up for the JDA -- Jewish Date-aholics Anonymous. Not, mind you, that I'm addicted to dating. To me, dating is only a means to an end. I can stop any time I want to. No, really. I'm just using it. Having my way with it. Then, when I find my beshert, I'll kick dating to the curb, like an expired box of Manishevitz matzoh. But I'm spending so much time and energy dating that it sometimes feels like an addiction. Or at least another career. If only it paid. And didn't involve so much time at Starbucks. And didn't require at the end of each meeting having to come up with a polite way to say, "It's perfectly okay with me if we never see each other again for the rest of our lives; in fact, I'd prefer it." Which usually emerges from my careful-to-be-tactful mouth in this fashion: "Very nice meeting you."

In the first three years following my divorce, I went on 150 coffee dates. And by coffee dates I'm using the standard Merriam-Webster dictionary definition: "first-time meetings, usually ending in disappointment." And I'm an optimist, mind you. Now, I realize that 150 coffee dates sounds like a lot, but spread out over three years, it's just one a week. Of course, depending on the person, 15 minutes with the wrong person for the first time can seem like one week. But I learned something very important from those 150 coffee dates. I learned that if I had saved all the money I spent on them, I could have planted 1200 trees in Israel. Granted, four of the dates resulted in relationships. But 146 of them resulted in "Very nice meeting you." And a thorough knowledge of the differences between lattes, frappucinos, chais, and caramel macchiatos. If only that paid.

I have learned that if I had saved all the money I had spent on my 150 coffee dates, I could have planted 1200 trees in Israel

Sometimes I think this dating odyssey is God's way of getting back at me for never having taken chemistry in school. He's making it virtually impossible for me to find chemistry with my potential soul mate. Is mutual worship and adoration too much to ask? Of course not. You can ask for it all you want. Getting it -- now that's the trick. Either they're not attracted to me or I'm not attracted to them. Sometimes they show up without a sense of humor, without a sense of playfulness, without even the realization that someone else is sitting across the table from them. They'll talk for a full hour about themselves without asking me one question about myself. Astounding. But at least they're setting their red flags up on the table right from the start. And for that I thank them.

I do like the variety, though. I've gone out with a judge, a masseuse, a teacher, a network executive, a nurse, a college student, a speech therapist, a doctor, an actress, a psychologist, a lawyer, even a forest ranger. On one date, as soon as we sat down to brunch, she removed a digital scale from her pocketbook and proceeded to weigh each item of food that was served. At one Starbucks, I sat waiting an extra half hour for my date to arrive, even though she was already seated a few tables away, because she looked so different from her profile's photo that I could not believe that this was the same person. Finally, I approached her and she confirmed that she was, in fact, my date. Though to this day I remain unconvinced that she was not my date's mother.

For one first-time meeting, my date suggested we see "The Pianist," a Holocaust-themed movie. Beautifully done, very powerful and moving, but somehow doesn't quite set the desired mood for kicking off a relationship. Oh, sure, I did what I could to salvage the mood afterwards, by saying "How about a screening of ‘The Sorrow and The Pity' for our second date?", but to no avail.

And though I've done my share of rejecting, I've also experienced my share of being rejected. At first, I'd take it personally. Now I consider it part of the process. Often, women can't bring themselves to say, "Sorry, not interested" to my face, so they'll lie. In one case, when I asked about the possibility of a next date, she responded, cheerfully, "Call me!" I did and never heard back from her. Now when I hear a cheerful "Call me!", I realize it's the kiss of death, not unlike that given by Michael Corleone in "The Godfather." My favorite kiss-off, though, happened recently. I brought up the subject of a third date, and actually heard these words come from her lips, "I'm going to be really busy in December." Wouldn't a quick slap across my face have made the point more directly?

Then there are the ones who haven't quite mastered the tactful means of breaking off a long-term relationship. To my mind, there's just one way to do it right -- face-to-face, honestly, acknowledging the person's wonderful qualities and the great times had together. The wrong ways -- disappearing without a word, doing it over the phone, emailing a "Dear John" letter, sending big brother Sonny Corleone to bounce some metal garbage pails off my head. Okay, that last one hasn't happened. Yet. But, come on,ladies, acknowledge the good. And act like a mensch.

When a relationship works it's magic. And I know she's out there somewhere, perhaps even looking for me.

So why go through all the pain, the aggravation, the expense, the wasted time, the same interview-like questions, over and over again? The singles websites, the Speed Dating, the Great Expectations, personals ads, blind dates, coffee dates, matchmaking services. Am I masochistic? Am I a serial dater so addicted to the process that I consciously or subconsciously never intend to settle down with one of them?

I don't think so. I'll tell you why I go through it all, and why I'll continue to go through it all. It's because I've experienced a relationship when it works. In fact, I've been lucky enough to have had more than one relationship in which both people worship and adore one another. Now, I'm guessing that for most people these kinds of relationships don't happen often. But when they do, it's special, exciting, stimulating, life-enhancing. It's magic. And I know she's out there somewhere, perhaps even looking for me. All I ask is that at the end of our first date, she doesn't look me in the eyes and say, cheerfully, "Call me!"