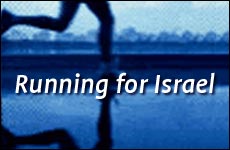 One race, one rabbi, one million dollars.

This past spring, Eric Ertel did something no rabbi had done before: he pledged to raise a million dollars for Israel by running in the New York City marathon.

A slight 27-year-old whose velvet kippa and wire-frame glasses belie his newfound athleticism, Ertel's decision to train for the running world's ultimate race and raise a small fortune within six months was met with widespread incredulity.

"My friends said, 'You'll never raise a million dollars. You'll be lucky if you raise $5,000,'" Ertel recalled. As the former captain of his high school track team in his hometown of Twin Rivers, New Jersey, Ertel -- who had not exercised for nine years when he began training for the marathon -- kept having the nagging thought that running could be his contribution to peace in the Middle East.

"Each of us has our own talents and skills that can be used to help make a difference, and running this race is my talent and skill," Ertel is quoted as saying in the promotional material for Running for Israel, the non-profit organization he founded last month to collect funds for a trio of charities aimed at benefiting Israel.

Eric's impetus to act came after a December, 2001 suicide bombing in Kikar Zion; among those murdered was a teenage boy whose family lived downstairs from Ertel in Ramat Eshkol.

"Helping Israel would be my little contribution in trying to help the world." A graduate of Aish Hatorah in Jerusalem, Ertel witnessed Israel's deteriorating security and financial fortunes firsthand when he lived in the heart of Israel's most frequent terrorist target for seven years, until May 2002. His choice of marathon charities -- Hasbara Fellowships which provides advocacy training for Jewish university students; Honest Reporting, a media watchdog groups that seeks to root out anti-Israel bias; and Keren Y & Y, an organization that provides needy families in Israel with cash coupons for basic foods -- reflects the experiences of Israelis affected by close to four years of terrorism, international censure and the global economic downturn.

"One of the things Aish teaches is activism," said Ertel, who currently lives in Manhattan, where he serves as Aish Hatorah's local educational director. His own impetus to act came after a December, 2001 suicide bombing in Kikar Zion; among those murdered was a teenage boy whose family lived downstairs from Ertel in Ramat Eshkol.

"From that point, it became really personal," he said. "Now I really had to be proactive and do something about it." His first training session left much room for proactivity. "I went on the treadmill and I ran one mile. It probably took 12 minutes, and the next morning I could hardly walk." The first time Ertel completed a six-mile run, his webmaster posted this message: "Rabbi runs six miles and lungs are still intact."

With three months to go before the November 7 marathon, Ertel is up to 13-mile jaunts in Central Park, and he hopes to complete the five-borough marathon in less than four hours.

While Ertel declined to disclose how many donations he has racked up, he noted that he has received interest from individuals, corporate sponsors, foundations, and other non-profit organizations, and that a famous marathon trainer has offered her services. He is also calling on the hundreds, if not thousands, of Jewish New Yorkers among the marathon's 35,000 runners to don a Running for Israel t-shirt on race day and be a part of his team. If he can find a few more running rabbis, Ertel said, maybe fundraising for Israel will become a regular fixture on the marathon circuit.

"It could be that this is much bigger than this one marathon," he said.

My Promise to Kaya

The Day Rechavam Ze'evi Was Assassinated

Israel at 60
Can You Show Me This "God?"
How to Become Immortal
Judaism and Mental Health
Comments
MOST POPULAR IN Israel
Our privacy policy
Aish.com Is Looking for Great Writers