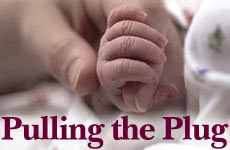 When our baby went into a coma, the moral dilemma began.

What does one do when the smallest flame of human life, a baby, is snuffed out?

I'm not the first person on earth to lose a baby. In times past, a mother could lose her entire brood to sickness, plague, frostbite, or starvation. Death was part of living, and while it wasn't less painful, it was bearable somehow. You knew it was inevitable.

Nowadays, with advanced medicine and high standard of living, we have pushed death to the outer reaches of our consciousness and are absolutely shocked when it comes roaring in.

When our baby was three days old, he stopped breathing in his crib.

Losing a baby is a heart-rending experience. When our first baby was three days old, he simply stopped breathing in his crib. The paramedics were able to resuscitate his heart, but his brain was long gone. He lay in a coma for five months, and died alone in a hospital in a city far away from us.

Many painful issues arose in the face of this trial. One of the most vexing centered around the doctors' consternation as to why we were not "pulling the plug." They thought we were out of our minds for putting ourselves through such suffering.

Part of me agreed with them wholeheartedly. Nothing in my tender existence had prepared me for such gut-wrenching pain. As our baby lay still, day after day, week after week, I thought I would go mad. No one held out hope, and I felt like a drowning person gasping for air. Having a baby is an experience whose entire essence is permeated with hope and potential. When that hope is extinguished, it's like the roof being blown off the house. You can't have hope without a chance for life. It just doesn't work.

As time ticked by, the doctors became more persistent about our moral and ethical obligation to "relieve" his and our suffering. This moral dilemma became one of the foremost sources of pain and uncertainty. We were haunted by the thought that we may be somehow acting cruelly by allowing our baby to live, and perhaps suffer needlessly. Yet on the other hand, to "play God" and decree an end to our child's life was too heavy to handle.

For a while we simply stalled for time, hoping against hope for a miracle to heal our son and put an abrupt end to the entire matter: To the doctors it seemed a simple matter. The right thing to do was to pull the plug. But as my husband said after one particular grueling encounter, "This guy is 10 years younger than me and probably took one short course on ethics in med school. Does that make him an authority on what's moral or not?"

We felt that the answer might lay in the Torah. We had become more Jewishly involved, and had found the timeless wisdom of Torah to be an invaluable guide in many difficult situations. But this was literally life and death.

Our rabbi deeply empathized with our plight. He assured us that Torah did indeed offer clear guidance on the subject, but humbly admitted that the answer was beyond his expertise. He gave us the name of a rabbi in New York who was an acknowledged expert in these questions. "If there is anyone in the world who can guide you through this, it is him," our rabbi assured us.

My husband hung up the phone with a look of relief and certainty on his face.

That evening, my husband nervously dialed the number we had been given. I heard him describe the whole situation, going into great medical detail, prompted by the rabbi's thorough questioning. Fifteen minutes later my husband hung up the phone with a look of relief and certainty on his face that I hadn't seen since our whole ordeal had begun. He looked at me and said, "Miri, it's clear. As long as the situation remains as it is, the right thing to do is not to pull the plug."

As he repeated to me the rabbi's rationale and other details, it became clear that this rabbi was as medically sophisticated as any of the doctors we had been dealing with. That put me at ease. But what stood out the most and which inspires me to this day is the way he viewed my baby's life with such depth and sensitivity. He explained that whether we could see it or not, every drop of life has value and purpose in God's vast cosmic plan, and we had no more of an ethical license to end it than we would to end any other "normal" life.

The dignity with which he related to our baby's life brought tears to my eyes, and cut a sharp contrast to the often indifferent and disposable attitude we had encountered from many of the doctors. I felt so grateful that we hadn't bowed under the hospital's pressure to pull the plug. And I realized that it wasn't going to be easy to keep going, but at least we had a clear direction, and I felt strangely calm and resolved knowing that we had a 3,500-year ethical tradition backing up our decision.

When the time came to transfer our baby to a long-term care facility, the doctors, sensing our clarity, pulled us aside one last time. "We've never seen anything like this. We've never seen parents in your situation keep their baby alive, and conduct themselves with such dignity. How do you do it?"

We tried to discuss with them briefly our ideas about faith and belief in a power greater than ourselves. (Luckily they didn’t see me screaming into my pillow every night.)

Our baby died naturally, soon after we transferred him. We had moved him to another, out-of-town facility because the hospital where he had been needed the bed space, and we had not yet relocated to the city where he was. We received a phone call in the middle of the night, a hasty funeral was arranged, and I assumed this chapter in our lives had come to a sad but definitive end.

I didn't realize that although the baby had left the world, a part of his soul remained attached to mine, very much like when we had been physically attached. He never left me. Even though we buried him, I could not forget him.

Every experience I faced afterward included him. Every door I opened admitted him. Every pain or suffering I felt was compared to him and left wanting. In a sense, I became both more vulnerable and more insensitive. Losing a child is like losing a limb that will never grow back, and yet you continually sense its presence even after it's been gone a long time. You learn how to function without it, yet life is never the same.

As the years passed, and our family grew, I was surprised to find my pain increasing rather than decreasing. As the children got bigger, and I grew so fond of them and attached to them, I began to realize what it was I had lost when my precious first born left the world so soon. At the time, I didn't realize what having a child meant. I didn't know what being a parent entailed. It was all theory.

Even though we buried him, I could not forget him.

Now, with these beautiful, shining souls blossoming before me like some wild poppy field run amok, I was shocked again by my loss. Every milestone left me thrilled and drained at the same time, as I experienced everything twice: once for the live child before me, and once for the potential child that was not meant to be.

I worried more than the other mothers, I never left a child unattended for even a moment, and devoted myself completely to the task at hand of mothering.

And yet, I also found myself subject to a curious detachment. "Wait a minute," I told myself. "These little guys could come and go." I sensed at any moment they could be snatched away, and I didn't want to get too close. I never had that easy, almost careless rapport some mothers have with their kids because, for me, there was just too much at stake.

ANCHOR IN THE STORM

I try to imagine what my life would have been like if I had had to face it without the knowledge that God was watching over me every moment, and orchestrating the symphony that is my life down to its last detail. What would there have been to hold on to? Who would have been there to guide us?

Looking back, it does seem rather amazing that we were able to withstand such pressure. So much was at stake: the baby's life, our lives, our parents, our new marriage. Everything was hinged and teetering. The doctors and social workers made it clear to us that our marriage could easily fall apart, as many do in this situation. But Jews don't fall apart so easily.

I can clearly see in retrospect that the decision to consult and act upon the Torah's guidance was a major turning point -- an anchor to get us through the storm. I saw how the sensitive yet unequivocal stance of Jewish law saved a precious marriage that could have easily collapsed beneath the weight of an unbearable burden. And I discovered that Jewish law, halacha, which literally means "the path," doesn't merely stop at the pages of the legal codes. It extends itself deep into the human heart.

Knowing we were following this path gave us the strength to withstand our test.