My Son, the Teacher 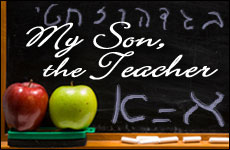 I told my kids that the two most important things are Jewish education and the State of Israel. How was I to know that they were actually listening?

When the kids were little I would say, eat your broccoli -- it's good for you, and they would sneak it to the dog under the table. At night I said, go to bed -- children need at least eight hours solid sleep to grow on, and they would take flashlights and books under the covers. (This was before Gameboy.)

When they were in high school, I would say, the two most important things in our lives are Jewish education and the State of Israel. How was I to know that they had started listening? Aliza has ended up in Ramat Beit Shemesh, and Jonathan decided to decline dentistry school in favor of becoming a yeshiva high school teacher of Talmud and Bible.

Toward the end of his junior year of college, when Jon was wrestling with what career to choose, we had long, impassioned conversations. His father tried mightily to impress upon him how expensive life is today. "You have no concept of what it means to pay rent, medical insurance, car insurance, groceries, taxes -- the list goes on and on." He must have made an impression because Jonathan applied to the dentistry schools at New York University and UMDNJ (University of Medicine and Dentistry of New Jersey), and was accepted by both.

We should have predicted what was coming. Toward the end of his college senior year, he requested and received a one-year deferment from UMDNJ. He wanted to finish his requirements for rabbinic ordination and a master's degree in Jewish education. "After this year, I'll be so busy with dental school that I won't have a minute to study Torah." It made sense. He never talked about his future profession as a dentist. He just buckled down to get his smicha (rabbinical ordination).

Jonathan is a gifted teacher. He has spent summers as a camp counselor and Sundays teaching in congregational school. He is a terrific athlete, which the kids respect. He uses his athletics and his good-natured sense of humor to forge a relationship with his charges. I was surprised and a little disappointed when he opted for dentistry, even though it put me at odds with my husband. I'm not as financially realistic as he is, and I just thought Jonathan would find a way to manage if he went into teaching. As bright and dexterous as he is, I couldn't see him as a dentist, but I didn't say so. The days of my telling him what to do had passed. Having married a wonderful girl after college, this was their decision to make. Jon and I have always had a special relationship, one of those mother/son things. He was to start at UMDNJ last year in the third week of August. In mid-August, he called me at work. "Mom, I can't do it. I can't not teach. I'm good at it and I love it and it's meaningful. Anybody can fix teeth. I need to be in Jewish education. Jewish education needs me."

I actually cried with relief. This felt right. After all, I've been working in Jewish education in one capacity or another for more than 30 years, and I know that our community desperately needs good teachers. "Mom, how do I tell Dad? He's going to be so upset." Upset does not begin to describe how he would feel. Livid comes to mind. Devastated is not far behind.

"Jonathan," I said, "you sound like the daughter who wants to marry the poor tailor in ‘Fiddler on the Roof ' and is afraid to tell her mother ... Hey, how have you been sleeping this week?"

"Terribly. I've been agonizing over this."

"Okay! That's what we'll tell Dad. We want you to be happy, and a pile of money is not going to guarantee your happiness. You have to be doing what you love. Tell Dad you couldn't sleep this week and eventually he'll come around."

It wasn't as immediate a reprieve as Tevya manipulated, but Allen understood what Jonathan was saying. More surprising were the reactions of our friends. Some of them congratulated us on raising so idealistic a child. Many of them commiserated, concerned about his future earnings potential -- and the effect of his decision on their own children, who were at the same crossroads. For a year they had been telling their kids, "Why can't you be like Jonathan Kessel?" Now what would they tell their sons?

Jon made his decision late last year, too late to get a full-time teaching appointment. But he did get a part-time position, which enabled him to get used to teaching on the high-school level. He did so well in the eyes of his students and the administration that they offered him a full-time job with a respectable salary, which began this September.

He and Rachel will be earning enough to be independent. They have a little baby, but for a few years yet they'll be spared the kind of backbreaking tuition bills that gobble up all disposable income. Perhaps by then, the earnings potential for teachers will have caught up to that in other professions. The Jewish community doesn't know how lucky it is to have someone of Jonathan's caliber make the decision he did. He regards his talent as a gift from God, one that he sees as conferring on him a solemn responsibility.

We are proud beyond words of Jon and Rachel. We invoke God's blessings on them, and we pray that over the years our community will join us in expressing tangible appreciation to the men and women who partner with us in parenting our most precious resource.

© 2006 Barbara Kessel. Reprinted with permission. This article first appeared in The Jewish Week.

Barbara Kessel is author of Suddenly Jewish: Jews Raised as Gentiles Discover their Roots, and Director of Administration at the Board of Jewish Education of Greater NY.

Israel Struggles
Why Are The Prayers Of Yom Kipur So Repetetive?
Ha'azinu 5783: A Time for Unity!
Twisted Thinking
Comments