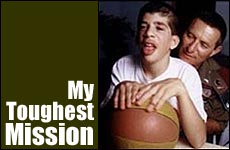 An Israeli general faces the challenge of a lifetime - raising his autistic son.

Major General Doron Almog has taken part in some of Israel's most daring military operations: He was the first para-reconaissance commander to land on the runway at Entebbe, marking it for incoming Israeli airplanes, and leading the capture of the airfield's control tower in the stunning rescue operation of 1976.

He participated in the clandestine airlift of some 6,000 Jews from Ethiopia to Israel in the eighties.

And in his most recent post, as head of Southern Command from 2000-2003, he foiled every single attempt by terrorists from the Gaza Strip to infiltrate Israel.

But ask Almog, 53, about his toughest mission, and he'll tell you it's nothing he's ever done in the army.

"Taking care of my boy -- that's the most immense challenge I've ever faced," says the trim general, sitting in his backyard, watching his son, Eran, frolic in a toddler's wading pool. Eran is 20. He wears a diaper, chews only baby food, and cannot speak. He is autistic and mentally retarded.

Eran has never said 'Dad' or 'Mom'. But when Almog calls his son, he looks up at him, his eyes beaming.

If you complete all the steps from A to Z, the military mission is a success. But with Eran, Step A is endless, and it's not clear how you even define 'success.'

"In Entebbe, we had to fly 2,600 miles, kill the terrorists, free the hostages and fly back home," recalls Almog. "In a military mission the goals are very clearly defined. If you complete all the steps from A to Z, the mission is a success. But with Eran, Step A is endless, and it's not clear how you even define 'success.'"

Tasks that are mundane for most people are excruciating for a child who doesn't speak or respond. "When I take him to the dentist I need to tie him to the chair. When we buy him new shoes we have to figure out whether they are comfortable or not for him. Eran depends on us to decipher his needs, speak for him, and be his link with the world."

Almog recalls that when his son was born, he and his wife had the kind of expectations all parents have -- that their boy would be successful, even more successful than his parents -- a rising military star and school principal -- had been. It quickly became apparent that that was not to be. Doctors told the couple that Eran was brain-damaged.

"There were friends who advised us to send him away," Almog recalls. "I think the most significant decision we made was to raise him, love him and never be ashamed of him."

Ultimately, Almog says, that decision changed him. He became known not only for his outstanding military skills, but also for his compassion and determination to help the less fortunate -- traits not typically associated with military heroes.

"Raising Eran has made me a better human being. By constantly being forced to ask myself what he needs, I became a more sensitive person, more attuned to those with limitations."

As head of the Southern Command, Almog launched a series of revolutionary programs to help weaker sectors of the population in the Negev, the most economically deprived region of the country.

One program provides educational enrichment for the Beduin -- who make up a quarter of the population of the region, but have the lowest level of educational achievement. Many Beduin serve in the IDF. Almog's initiative enables those without high school diplomas to qualify for and go on to complete university degrees.

Almog brought mildly retarded adults from a group home in the Negev to a nearby army base, where they worked as volunteers doing simple maintenance jobs. The fact that they were able to don IDF uniforms and work on a base boosted their self-esteem, and led more army base commanders to ask for this highly motivated work force.

"Every commander of a unit in the Southern Command had to present an annual plan outlining which special needs group he was adopting and what he would do for them."

Some of these programs are now being implemented nationally.

Almog's insistence on speaking openly and publicly about his son has helped dispel some of the stigmas often associated with retardation and autism.

After he first talked about Eran to the soldiers of the Southern Command, one sergeant major approached him a few days later and began to cry. "He said that until then he had been too ashamed to speak about his retarded daughter." recalls Almog. "Hearing me talk about Eran gave him a sense of respect and pride."

Over the years, Almog has devoted energy not only to caring for his own son, but to improving the welfare of all children in Israel with severe disabilities -- through his involvement in Aleh.

The nonprofit organization provides high-level medical and rehabilitative care to some 500 mentally and physically disabled children throughout Israel.

Since age 13, Eran Almog has been cared for at one of Aleh's three facilities, the Moriah Center in Gedera, a home to some 90 children suffering from cerebral palsy and other severe disabilities.

Almog speaks with awe of the caretakers at the facility. "These are people with no ego and boundless strength. They do everything with love."

Deeply impressed by the care his son received, Almog mobilized funds to establish a new wing at the center, which was subsequently called Beit Eran-- after Almog's brother who was killed in the Yom Kippur War. (The general's son is also named after him). Now, as chairman of Aleh Negev, Almog is leading a project to build Israel's first facility for the care of severely disabled adults -- like Eran. The 100-dunam village under construction near the Negev town of Ofakim will provide a home for 200 mentally and physically disabled adults. The spacious facility will include a special education school, paramedical center, hospital wing, workshop for rehabilitative aids and occupational and professional framework along with a full range of therapies -- from music and art to hydrotherapy and horseback riding.

"The idea is to provide these adults with a homey, warm atmosphere and, at the same time, help them use their full potential and become productive," explains Almog.

At present, there is no such center in Israel for adults, and once Aleh Negev is complete it will become one of the only facilities of its kind in the world.

The State of Israel has allocated land for the village, and adopted it as a national project, agreeing to pay half the price tag -- about $43 million. Almog, who is due to retire from the IDF at the end of the year, looks forward to devoting himself even more intensively to his pet project, and is actively engaged in fund-raising.

Reflecting on the challenges he has faced, Almog reverts to the Entebbe analogy.

"In Entebbe," says Almog, "it was possible to free the hostages. But Eran and those like him spend their entire lives as hostages -- hostages of society and its stronger members. There is no single operation that will set them free.
"All you can do is try to give them a better future... That is what I am trying to do, and it remains the greatest challenge of my life."

This article originally appeared on www.israel21c.com

Am I the Enemy?

The Human Cost of Terror
For Every Individual, A Torah Scroll
Allegiance To The Monarch
Meet the Real You: Yom Kippur
Comments
MOST POPULAR IN Israel
Our privacy policy
Aish.com Is Looking for Great Writers