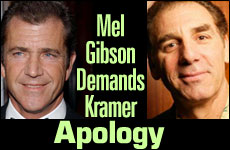 JEWLARIOUS SATIRE: Fresh out of rehab for difficulties with alcoholism and sensitivity training as a result of his anti-Semitic remarks, Mel Gibson has demanded that Michael Richards, or "Kramer" from the hit series "Seinfeld," apologize for his recent racist outburst. The incident occurred at a Hollywood comedy club where Richards called two black men in the audience the "n-word" and enthusiastically referenced a time when blacks were often victims of civil rights abuses.

The event has caused outrage across a wide spectrum of the public, including Black groups, religious organizations and entertainers, chief among them Gibson himself. "Richards' outburst is completely unacceptable and despicable," said an emotional Gibson. "There is nothing funny about the difficulties that the Blacks have endured over the years. Now the Jews, that's another story. Wait... I didn't mean that. You didn't record that did you? Give me your tape recorder!"

After a brief scuffle Gibson yelled, "I don't want to go back to sensitivity training! Those rabbis scare me!"

"Why are they all slurring their words? Maybe if we pay for the racists to get some good speech therapy, the world would be a better place."

When asked to comment, Richards' friend and former co-star Jerry Seinfeld released a somewhat strange statement saying, "What's the deal with racial slurs? Does every racist have a speech impediment or something? Why are they all slurring their words? Maybe that's why they are all so angry. Maybe if we pay for the racists to get some good speech therapy, the world would be a better place."

Richards has found at least one Hollywood friend who has remained a supporter despite the outburst -- and an unlikely one at that – O.J. Simpson. After having his recent book "If I Did It," about the murder of his former wife and her friend Ron Goldman, pulled by Fox, Simpson said, "People should just stop falsely accusing Michael of doing something he didn't do. He did not make any racist comments whatsoever."

When shown a video of the incident, Simpson responded, "This has obviously been doctored by the Los Angeles Police Department. Look how blurry it is! Mike, I've got a message for you -- if the tape is blurry, no need to worry."

Rumors have begun to circulate that Simpson will be penning a book with Richards to capitalize on the incident titled, "If I Made a Racist Outburst." Explained Simpson, "Now I am not saying that Michael Richards made those racist comments, but buy our book for $39.95 and we will tell you exactly how he would have done it."

Simpson aside, industry colleagues were in no hurry to accept Richards' apology. Veteran publicist Michael Levine said, "I've never seen anything like this in my life. To be honest, I think this is going to be a career ruiner for him. I don't think there is one job in Hollywood that Richards could get right now." Insiders however say that Michael Richards already has a lock on a post in an upcoming project -- he is set to direct the sequel to "The Passion."

A Celebration of Seltzer
The Blue Beyond
Great Place to Live
Is Eating Supposed To Be Spiritual?
Comments
MOST POPULAR IN Jewlarious
Our privacy policy