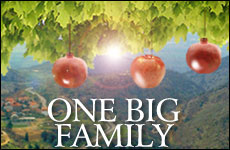 It doesn't take a war for a country to unite and feel like family. There's always Sukkot.

By the time I woke up, the snow was already piled high above my head. Because of the blizzard, Baltimore city snowplows would not arrive for a few days. So early in the morning, my father started shoveling the street on his own.

Early that afternoon, the road cleared of snow, the couple from the house with the blue shutters opened their doors, and all of the residents of Arden Road celebrated the clearing of the snow with a feast of rice with chicken and gravy.

While my childhood was marked by dozens of Thanksgiving dinners, and birthday lunches, and Passover seders, the excitement that I felt at these events could not begin to compare with the glorious feeling that all of us shared that day.

Today, I remember the sweet taste of that chicken with gravy as clearly as if I am still holding the fork and knife in my hands. I remember the chatting grownups, and the overdue introductions, and the laughing.

For my whole life, I will never forget what it felt like to see my childhood street of the drawn curtains, the double-locked doors, and the burglar alarms turn into one big family.

During the year, most of my life takes place behind a locked door. On Sukkot, everything changes.

Every year during the festival of Sukkot, I feel something akin to the exhilaration I felt the day of that terrible and wonderful blizzard.

During the year, most of my life takes place behind a locked door. If friends want to come over, or guests want to come for Shabbat, they call first to make sure that it is convenient for us.

On Sukkot, everything changes. We build our sukkah on the large sidewalk in front of our home, and we stock up on nuts and cookies and drinks for unexpected guests. And on Sukkot, when we unlock and exit our front door, and our family moves into our sukkah for the next eight days, everyone is an unexpected guest.

The elderly woman from next door who feeds the street cats comes by to show us pictures of her grandchildren, the children from the end of the block come by to play with Legos and drink some orange soda, the family from Tel Aviv who have never seen the inside of a Sukkah submit to my husband's urging, and join us to say a L'Chaim.

In our sukkah, we meet neighbors we have never met, neighbors that we haven't seen since last Sukkot, and strangers who, by the time they leave our sukkah, will feel like old friends.

Our street becomes a family.

Imagine inviting a family with five children to move into your living room for a month. That's what Israelis all over the country did this past summer.

Take a moment to imagine inviting total strangers to live in your guest room for an indefinite period of time. Imagine inviting a family with five children to move into your living room for a month. Imagine having another family to cook for, do laundry for, and live with 24/7 during the hectic weeks of summer vacation.

It's hard to imagine. But that is exactly what Israelis all over the country did this past summer. Without thinking twice. Because when a fellow Jew is in need, what choice do you have?

From outside of Israel, the war looked very scary. From inside Israel, as is often the case when our relatives abroad start sending concerned emails, it is scary but on a certain level, beautiful too.

In addition to the stress, we felt something that we are not often privileged to feel in this country that is so often torn apart by the divisions between religious and secular and right and left. We felt our country become a family.

Sheva Chaya Servetter, an artist who moved to Israel from the U.S. eight years ago, lives with her husband and three small children in Tsfat. On the first day of the war, as rockets fell, her family and 15 neighbors crowded together in her apartment's small fortified room.

Rockets fell so close to their home that twice Sheva Chaya heard them whistle overhead before they landed several houses away.

Sheva Chaya and her husband decided to leave Tsfat late that night, thinking that they were only leaving for Shabbat. They stuffed two days worth of clothing and diapers in a bag, and drove south. As they drove, they saw the night sky behind them light up as the rockets continued to rain down.

The Servetters have no family in Israel, and they spent the next month moving between four different homes in the Jerusalem area. They were amazed to see how, throughout their wanderings, they were welcomed with open arms by friends and strangers alike.

Everywhere they moved, local families cooked meals for them, offered to baby-sit, and provided them with desperately needed clothing and toys and diapers. There were free summer camps provided for their children, and concerned phone calls from community members who wanted to make sure that that all of their needs were taken care of.

Sukkot is an opportunity to leave our homes and unite with our fellow Jews in song, feasting, and joy.

The situation wasn't easy, but by the time they returned home to Tsfat at the end of the war, their car was much fuller than when they had left.

We don't need to wait for hard times, like blizzards and floods, terror attacks and wars, to open our hearts to the plight of others in need. Sukkot is an opportunity to leave our homes -- the physical walls that separate us from those around us -- and unite with our fellow Jews in song, feasting, and joy.

This Sukkot, invite some neighbors over -- the elderly widower in the beginning stages of Alzheimers, the recently divorced mother down the block, the young couple who just moved in next door and spend every Friday night, religiously, in front of the DVD player.

Because on Sukkot, we celebrate together as one big family.

Safe in the City