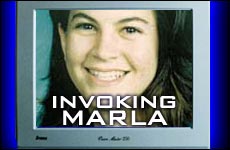 Am I cheapening Marla's memory by using her death to teach a point about living?

I had been having problems with my computer. Small but annoying things, like you can't be on the Internet and print at the same time.

So one night, after the kids had gone to sleep, I decided to upgrade the operating system. I'd done it plenty of times before on other computers. You just pop in the Windows CD and follow the instructions.

Or so I thought.

When the blue screen of death appeared, I got worried. When the computer froze up the second, third and fourth times, I started to panic.

I called my friend Craig.

"Have you backed up all your data?" he asked.

"Of course," I said. I'm smart enough to know that things can and usually do go wrong with computers.

After some discussion, Craig took a pessimistic tone. "I think you're going to have to reformat the hard drive."

I had already anticipated this as a possibility. But before executing the Reformat command, I decided to just double check that my data was indeed OK on the backup CD.

I took it downstairs to Jody's computer. A single CD with my most valuable data on it. All my stories for this column. Email communications for the past three years. Tax documents.

And then I dropped the disk on the floor.

OK, just pick it up, Brian. Don't move. No funny stuff. Easy does it…

But as I turned the rolling office chair to pick up the disk, the chair's legs moved unexpectedly and ran straight over the disk. I grabbed it.

Two huge skid marks across both sides. I put it in the CD drive. No response.

I tried again. OK, now I could see the files. I tried to copy something.

Then it went dead completely. And I let out a scream.

It was as close to blood curdling as I know how. The kind the villain emits in the movies when the priceless jewels fall out of his hands into some deep dark void. All I could think of was: All my data. Dead. Gone. Forever. I needed that scream.

As soon as I did it, though, I realized it was a mistake. Ten-year-old Merav woke up from her adjoining bedroom. "What happened?" she cried out from her bed.

Twelve-year-old Amir, still awake in his bed had been listening to the whole thing and was sharing in my panic. "Abba, your data going to be OK. It has to be. Won't it Abba?"

I was starting to feel faint. The blood was rushing from my head.

Then my wife invoked Marla. "Calm down It's not like someone died."

Jody came running downstairs. "Calm down," she implored, the voice of reason. "It's just a disk. I'm sure there are ways to get the data back. We'll call someone. There are programs to fix these kind of things, aren't there?"

And then she invoked Marla.

Her timing couldn't be more on-target. It's been two years this week since Marla Bennett, our cousin, was murdered in the attack at Hebrew University on July 31, 2002.

Immediately, I felt like an idiot. Getting so worked up over "things." Possessions. Data could be reconstructed. Worst case, I'd just have to recreate the stories, or write new ones. Email addresses could be retrieved.

I was taken back to a morning a few weeks earlier. Merav and Aviv were fighting about something before heading off to school. Nothing major; just the sort of quibble that breaks out periodically between siblings. But Aviv started to cry, and Merav was sent to her room.

When her time-out was over, Merav immediately grabbed her backpack and violin and stormed out the door without saying a word.

Now, since Marla died, I have made a point of always giving a kiss and a hug before anyone trots off to school.

I caught up with Merav on the staircase. And I invoked Marla, too.

"Is this really worth it?" I asked, "Getting so angry over a little fight. Imagine if on the morning that Marla died she had a fight with her future husband and had left without saying goodbye and then she was killed. That would be the last thing the two of them would remember; that they left angry without saying I love you."

Merav got it. Kids are so much quicker than adults on the important stuff.

But afterward I thought: is it fair, is it right to invoke Marla? To "use" her death in such an obvious, almost cliched way, to teach a point about living? Is there a minimum level of injustice, I wondered, that is appropriate for invoking Marla, so that we don't cheapen her memory?

Or is that the point? That any way that Marla, through her death, can help us to grow to be better people is worthwhile.

About my data. Fortunately, I hadn't reformatted the hard drive when I went to check the CD, so the data was still there and I was able to retrieve it with the help of some high-priced technical support. The operating system was successfully restored and the computer is pretty much back to the way it was.

But I received some new data that hadn't been there before: That nothing is worth getting desperately upset over. Unless it's someone you love, and then no program in the world can retrieve that data.

Brian Blum writes the syndicated column "This Normal Life" at http://www.brianblum.com. Email him at brianblum@mail.com.

A Light in the Darkness
Evolution 2.0: The Coming Darwinian Revolution
Chukat 5782: Let’s Play the Blame Game!
The Sin of Moses: The Two Ways to Communicate
Comments
MOST POPULAR IN Israel
Our privacy policy