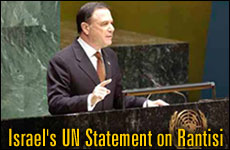 Statement by Ambassador Dan Gillerman,
Permanent Representative of Israel to the United Nations,
Before the Security Council

At the outset, I would like to congratulate you on your assumption of the Presidency and express our appreciation for your wise stewardship.

Today, the Jewish people and the people of Israel commemorate Yom Hashoah, Holocaust Remembrance Day. I know that all delegates will join with me in commemorating the memory of the six million victims of the Holocaust, innocent Jews who suffered unspeakably at a time when there was no Jewish State to defend them.

It is with regret that the Council has been compelled to convene again on this day not to condemn the murder of innocent civilians by organizations such as Hamas, but to denounce the demise of a key architect of those massacres. As we have said time and again, this pattern of activity only harms the prestige and reputation of the Council.

Just hours before the targeted counter-terrorist operation against Mr. Rantisi, the organization which he headed, claimed responsibility, together with the Al Aqsa Martyrs' Brigade, for yet another suicide attack - this time at the Erez Crossing where Palestinian workers enter Israel daily. The attack killed 20 year-old Kfir Ohayon of Eilat, a guard at the crossing, and injured several others. It was perpetrated by an individual who had been given a license to work in Israel, and against a person whose primary task was to facilitate the entry of Palestinian workers to their places of employment. In recent days there has also been repeated and indiscriminate Qassam rocket fire at civilian communities in Israel and continued attempts to perpetrate acts of terrorism.

On any fair and balanced account, these acts of terror should be the focus of the Council's specific attention, not the acts of self-defense necessary to prevent them.

Were the current Palestinian leadership a genuine partner in peace, defensive actions such as the one Israel was recently compelled to undertake would not have been necessary. The Palestinian obligation to dismantle the terrorist infrastructure, arrest terrorists, confiscate illegal weapons and stop incitement is as obvious and fundamental a legal imperative as it is a moral one. Under the Road Map, Security Council resolutions, signed agreements and international law, the Palestinian Authority is required to arrest murderers like Rantisi - not give them protection and safe haven. This is what the international community demands in the global fight against terrorism.

If there is something "extrajudicial" here it is the total refusal of the Palestinian leadership - for years - to act against terrorism in violation of every judicial standard.

I need not repeat the litany of cold-blooded murder, which Mr. Rantisi was responsible for, and intent on continuing. He was a radical terrorist leader that joyfully and publicly celebrated the murder of innocent men women and children, sought to destroy any peace initiative, and called for the destruction of Israel by force of arms. He believed that violence was the "only option". He developed alliances with terrorist groups operating around the world, supported by regimes in Syria and Iran, and was committed to fostering terrorism in Iraq and throughout the Western world. A pediatrician by training, this doctor led the campaign to mobilize women and children for use in suicide bombings. He turned his craft from the healing of children, to the killing of children.

Rantisi was a trader in death, a doctor of death, and no one should be surprised that he paid the price for it. For those who criticize his targeting as "extrajudicial" - let me say that we are sensitive to these concerns. Were it possible to arrest Mr. Rantisi, while minimizing harm to civilian life, Israel would have done so, as is its usual practice. But in the absence of any cooperation from the Palestinian Authority, and any viable means of arrest, Israel is sometimes left no choice but to target those who plan, orchestrate and execute the murder of our innocent civilians.

We are engaged in an armed conflict against terrorism of an unparalleled scale, magnitude and brutality. It is no good to affirm in theory Israel's right to defend itself in this conflict, but then in practice seek to deny us the right to specifically target those illegal combatants directly responsible, as well their command and control structure. We do so in a manner that is both necessary and proportionate, and when no other realistic option of detention or prevention exists. In these circumstances, such actions are wholly consistent with international law and we have little doubt that nations similarly faced with such a horrific choice would act accordingly - and indeed have done so, and are doing so, with the support or acquiescence of the international community.

The targeting of Mr. Rantisi was not merely a necessary defensive act to prevent ongoing and planned attacks against innocent civilians, it is part of the global struggle against terrorism that has been thrust upon all of us. It sends a clear message that those who deal in terrorism, those who have exported airplane hijackings, kidnappings and suicide bombings to the world, will have no immunity.

In line with Security Council resolutions 1368, 1373, 1377 and others, this action makes clear that those who harbor or tolerate terrorists, let alone those who forge alliances with them, must be held accountable. The Palestinian leadership, and other regimes in our region cannot brazenly violate international law by supporting terrorists, and then seek to deny Israel the right to protect itself against them, a right guaranteed under that same law.

The entire world knows that Hamas is a terrorist organization committed to the destruction of Israel and of the hopes of peace by the deliberate massacre of innocent civilians. The entire world, including the Arab world, knows that Hamas is the enemy of peace and stability in the region and that there is a clear obligation to dismantle this terrorist organization. Although politics and rhetoric may silence this, the defensive targeting of Mr. Rantisi is no doubt a relief for many innocent Palestinians whose life he endangered by the strategy of terrorism and the rejection of peace he so defiantly championed.

The draft resolution presented before you, is yet another example of misrepresentation and double standard. It focuses yet again on the response to terrorism rather than the terrorism itself. It grossly distorts reality. And it seeks to bully the Council to score political points. It is a document that any fair-minded Councilshould be ashamed to adopt, and that any fair-minded delegation should be ashamed to sponsor.

As I have said, there cannot be peace and terror. There cannot be peace and Hamas. But as the struggle against terrorism continues, and at considerable risk, Prime Minister Sharon has launched a bold and unprecedented initiative to bring new hope and opportunity to the peace process. The disengagement plan, when approved, will lead to the evacuation of settlements and military installations in the Gaza Strip and parts of the West Bank. This move is not required by the Road Map, but as Mr. Sharon has declared, it is an opportunity to restart the Road Map process to which Israel remains committed. Prime Minister Sharon's bold initiative deserves the support of the international community, and of this Council, and we are grateful for the many expressions of support we have received. As the Secretary-General's Special Coordinator recently announced before the Council this proposed step "should be welcomed by all".

In the absence of a peace partner, Israel has been compelled to propose this unprecedented initiative itself, but it hopes and plans to implement it in a coordinated fashion that will ensure stability and security for both Israelis and Palestinians, provide a sound humanitarian infrastructure and rekindle the peace process.

This initiative is completely consistent with Security Council resolutions 242 and 338, despite claims to the contrary, it supports and can facilitate the two-state solution in the context of the Road Map process, and indeed is also consistent with previous peace proposals. As Israel has declared, we remain committed to a negotiated solution to all permanent status issues that will guarantee peace, security, prosperity, and stability for both peoples, as well as secure and defensible borders. As always, we recognize that no permanent peace agreement can be imposed - it must be agreed by negotiations between the parties. This is also set out very clearly in the statements issued in connection to the disengagement plan, for those who have taken the care to read them.

For those who have sponsored and tolerated terrorism, and sought for decades to prejudge the outcome of negotiations by pushing one-sided resolutions through the United Nations, to complain of a so called "unilateralist approach" is the height of hypocrisy that totally, and perhaps deliberately, misunderstands this historic and courageous initiative.

This is a moment of opportunity, a chance for the Palestinian side to prove finally that it is capable of a new and responsible leadership that fights terror and prefers the welfare of its people to the personal wealth of its leaders.

As I have said before, the Palestinian leadership has a choice - and the international community, and this Council, should encourage it finally to make the right one. It need not be on the wrong side in the war against terror. It can also choose a different path. It can prove to the world that it is ready to assume responsibilities, not just assume privileges. It can show that it is ready to establish a democratic society that will respect the rights of its people, and the rights of its neighbors, and not another terrorist dictatorship in the heart of the Middle East.

Israel is ready, as always, to be a partner in peace with such a leadership.

Ambassador Dan Gillerman is the permanent representative of Israel to the United Nations.

Israel by the Numbers

Who is Responsible for the Suffering in Gaza?

Eradicating the Right to Self-Defense