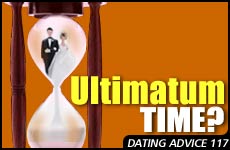 Oops! She forgot to tell him that she's dating in order to get married.

Alan and I are both 30 and have been dating for about six months, and both of us agree that we have a lot in common, care for each other and enjoy being together.

Last night, I not so casually brought up the subject of our future, asking Alan when he thought the time would be right to get engaged. His response surprised me. He said, "What do you mean? We're having a wonderful time and I hope that will continue, but marriage is not something I thought about getting involved with for at least a few years." Alan wants to finish paying off the money he borrowed for graduate school and to get more established in his profession before he takes on the responsibilities of marriage and a family.

On the other hand, I'm 30, and I don't want to wait three to five years to marry and then think about starting to have a family. Even if I wait that long, how do I know that Alan will marry me?

I think that Alan really believes his rationalizations for not getting married now, but frankly, I don't think that marriage requires the financial investment he talks about. We both have good jobs and earn good salaries. Should I tell Alan what I think? Is there a chance that if I start this discussion, I will lose him? What should I do?

If marriage is your priority, then treat it as such. Don't let yourself stay in limbo, waiting for the day that Alan comes around. You have to discuss your goal of marriage with Alan, and explain that you have two choices. You can break up with Alan, despite your love for him, and concentrate on dating men who are as marriage-minded as you are, or you can stay with Alan if he decides that he doesn't want you out of his life and is willing to change his time-frame for marriage and happily become engaged.

It could be that, despite your mutual affection for each other, Alan never thought of you as his future wife and, as you yourself feared, will not even think in terms of marrying you a few years down the road. If this is the case, your best response is to realize that you've already "lost" Alan as a future husband and stop dating him immediately.

It could be that Alan has entertained the thought of marrying you a few years from now if things continue to go well, but he is simply not psychologically ready to marry you or anyone else at this point in his life. In this case, you're also better off leaving Alan. If you wait for him to be ready to make a commitment, you risk (a) that the courtship will grow stale because the two of you have dated too long without a commitment, and (b) that you become resentful or bitter because you have to wait so long to marry and start a family.

On the other hand, it is possible that when faced with the choice of going on without you or marrying a few years earlier than planned, Alan will reassess his own priorities and decide that since both you and marriage are important to him, he will revise his time frame. This choice has to be entirely Alan's. You can't manipulate him into coming around to your way of thinking, or he will ultimately resent you for forcing him into something he never really wanted.

Similarly, you can't allow yourself to wait too long for him to decide that marrying you has become his priority. If you give yourself an ultimatum (don't give it to Alan) that you will leave if he doesn't want to get married, you have to follow through with it, despite the short-term pain it will cause both of you.

Unfortunately, when you started dating Alan you made a mistake that very many people fall prey to. You didn't clarify the goals at a very early stage. When dating in order to find a future spouse, you must only date people with similar goals. At the latest, after dating someone for a few weeks, you need to bring up the subject of the reason you are dating: to find a future spouse. If he or she has the same ultimate goal, you'd like to continue to see how things develop, but if the two of you are not on the same wavelength it's best to stop it now, before either of you gets too emotionally invested in something that's going nowhere.