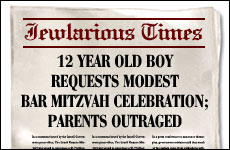 JEWLARIOUS SATIRE -- Richie Lewistein is about to become a man and his parent's are in crisis mode. Not because he hasn't studied or the affair is over budget, but because of his theme. In this day and age of over the top bar-mitzvahs and million dollar parties, Frank and Valerie Lewistein are at their wit's end.

The latest trend, especially in Manhattan, is themed bar-mitzvahs where the reception following the religious ceremony is not just dinner and dancing but an extravagant over the top production. Three of the most recent themed bar/bat-mitzvahs the Lewistein family has attended were; Charlie and the Chocolate Factory, A Night with Austin Powers and Texas Hold'em Poker.

When asked how he wanted to celebrate his bar-mitzvah, Richie Lewistein, a bespectacled lanky 12-year-old, said he just wanted Entenmann's. Lewistein's parents were at first puzzled by his choice but were excited about the challenge of making their sons bar-mitzvah theme come true.

A bar/bat-mitzvah is an important moment in a child's life, it is the moment when they enter adulthood and take on legal responsibilities according to Jewish custom. However, the Lewisteins appear steadfast in their desire to eschew the traditions of the day and emphasize a high priced party to follow the ceremony. "What better chance do we have to show off how smart our son is and how rich and successful our family has become," said Frank Lewistein.

"What better chance do we have to show off how smart our son is and how rich and successful our family has become."

Valerie Lewistein has been dreaming of this event since her son was born and has been planning this event since he was 10 years old. "Three years ago I reserved the grand ballroom at the Waldorf Astoria and the Rainbow Room at Rockefeller Center, but so many of our friends have had events there they seem very played. Last week I jumped at the chance to book the Top of the Rock which recently opened at Rockefeller Center. Richie's is going to love it."

Frank Lewistein, a successful lawyer and partner at the law firm Sterling, Shinewald and Rosenberg, is particularly excited about his son joining the ranks of Jewish manhood. "My son will be entering a tradition that spans almost 6,000 years, and what better way to celebrate Judaism and manhood then a live rendition of 50 Cent's hit single, ‘Thug Love.'" Lewistein has also arranged for Billy Joel and Elton John to play a medley of their hits to accompany the "horah" or celebratory Jewish dancing.

For Richie's part, he prefers something a little bit more low key. In a meeting with his parents to discuss his upcoming bar-mitzvah he said, "I really appreciate all of the planning you guys are doing but when I said I wanted Entenmann's, I meant that all I wanted was to eat some Popems at the kiddush room of the shul."

The Lewisteins rebuked their son and asked him what exactly he though a bar-mitzvah should be, "I'm happy saying some prayers, getting an aliyah and reading from the Torah. Afterwards I figured we could celebrate with some Cheese Danish Twist, Crumb Coffee Cake and Chocolate Chip Cookies."

Feeling angry and betrayed, Mr. Lewistein responded, "The kiddush room has terrible acoustics. What are Billy, Elton and 50 supposed to do?" Mrs. Lowenstein added, "Do you really think Paris Hilton is going to show for a kiddush? Where's the paparazzi supposed to set up?"

As Richie left to go study his Torah portion, he replied, "I just want to read my Torah portion and eat some Entenmann's doughnuts." When asked what the guests would do at such a celebration, Richie responded, "Let them eat cake."