The Swifts and The 13 Holy Soldiers 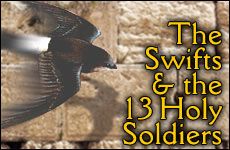 Reminders of what it means to be a Jew.

As I stood at the Kotel last Shabbat morning, I noticed an awesome sight. Throughout the prayers, a group of fascinating birds were wheeling and dipping above our heads as if they were on some kind of ornithological whirlwind tour of the airwaves surrounding the Temple Mount.

Why should these particular birds have the privilege of coming close to the Holy Temple?

They were swifts, and on Sunday I did a quick Web search to discover the following information:

"…Like flying anchors, these birds have greater mastery of the air than any other bird. Swifts drink, bathe, preen, and collect food and nesting material all without alighting. The night is spent on the wing and they are the only bird known to mate on the wing… Swifts are the most rapid fliers known among living creatures and the most aerial of birds… Unlike swallows and martins, the swift never lands on ground or perches on wires, and indeed spends almost all it's life on the wing…"

It became obvious. Swifts are spiritual birds, almost always soaring in the heavens; their physical needs raised to an aerial level, and always keeping a distance from the earthly. They are constantly moving, growing, working, flying, hardly resting for a minute. If birds had religions, swifts would definitely be Jewish! That Shabbat morning they too obviously needed to recharge their spiritual batteries…

After eating lunch with my children, I decided to override the normal limitations on sugar allocation, and with consummate paternal affection, I offered each amazed child a small candy. "Why, Abba?" my four-year-old, Ariel, asks.

"Because I love you," I responded (always a winning answer by the way.) His face broke into a big smile and he munched away, probably planning tomorrow's strategy of asking Abba whether he loves him and then following up with a request for candy!

That was beautiful, but then I experienced a moment of real holiness. I asked my six-year old, Shachar, whether he wanted a candy, and without hesitation he said: "But Abba, I had one today already."

Now he could easily have said "yes please" and his Abba would have been none the wiser. But from somewhere in his little conscience came the voice of Truth, the mastery of self-control, the glory of subjugating powerful physical desires to a greater, spiritual purpose. This is the same child who can decide he's going to preschool in shorts and sandals in the middle of winter, in innocent, independent defiance of any parental wisdom.

Oh how closely must we observe our children, how sensitive must we be to their every word. Oh how much have we to learn from them…we are nourished from their unbounded energy and naive purity.

And then there was Gaza. No swifts wheeling freely in the air. No four-year-olds smiling on the ground. Explosion. Blood, skin, and bones. And silence. 13 holy soldiers.

Holier than me; holier than you. They were prepared to give their lives for you and for me; for the Jewish people, for the Land of Israel. 13 holy soldiers.

One of the holy soldiers, Ya'akov, grew up in war-struck Yugoslavia. His friend, Ma'ayan, recalled, "The civil war was very hard for him. He lived in uncertainty, fear and hunger. In spite of the hardships, he took care of his mother, who was a Holocaust survivor, and his sister. He risked his life many times when he swam across the river to bring food home. That was the kind of person he was, responsible and dedicated".

Ya'akov, who lost his father at a young age, made aliyah two years ago. "He loved Judaism and Israel, and since he was 16 he read and knew everything there is to know…"

That's what being a Jew is all about. Hardships. Responsibility. Dedication. Loving Judaism. Loving Israel. Reading. Knowing…

No more candies for you holy soldiers. Go fly with the swifts, come to the Kotel, and please, please holy soldiers, carry our prayers on your wings.

From Mother to Son
Don’t Believe in Other Gods Versus God is One
Seeing Without Eyes
Why Shouldn’t We Eat Whatever We Want?
Comments
MOST POPULAR IN Israel
Our privacy policy
Aish.com Is Looking for Great Writers