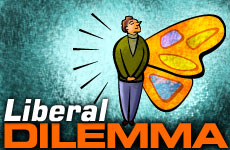 Having been a liberal for my entire life, I was plunged into confusion by the world response to the situation in Israel.

"Which is better?" is the wrong question; both are needed. Our question should be: "Which is appropriate in a given situation?"

Can there be any defense for a people who rise up against their neighbors, deliberately murdering civilians in an attempt to destroy the country?

Having been a liberal for my entire life, a protester of Vietnam and a lifelong rebel, I was plunged into confusion by the world response to the situation in Israel, which plays like a bad version of The Emperor's New Clothes. Can there be any defense for a people who rise up against their neighbors, deliberately murdering civilians in an attempt to destroy the country? Could anyone condemn a country for attempting to defend itself against unprovoked attacks? For me this was a no-brainer, but many people in the world community disagreed. My confusion was only increased when some of my liberal friends chose to sympathize with the perpetrators of the horrendous terrorist attacks which have occurred both in Israel and in our own country.

Each worldview represents a fundamental trait exemplified by our patriarchs. Chesed, loving kindness, was exemplified by our forefather, Abraham, who devoted his life to spreading the idea of one God. There are many potent images of chesed in his life: Abraham, still in pain from his self-administered bris; standing by the four open doors of his tent in the heat of the day, watching for wayfarers so he could offer them refreshment; realizing that his greatest student and nephew, Lot, was drifting from Torah and sending him away with kind words.

I salute liberals, whose ideal is chesed. They would understand our enemies and grant them forgiveness.

The second trait is gevurah, which means discipline and strength. It is exemplified by Isaac, who stood firm, like a tree, straight and tall and quiet. He walked to the mountain top, joined in his heart and will with his father and with God, where he requested that he be bound so an involuntary flinch would not mar the sacrifice. Isaac, firmly rooted in the Promised Land, the only patriarch who never left the Land of Israel and who quietly carried on the work begun by his father. Isaac, who had the strength of character to shed tears of joy and sorrow that he had been stopped from bestowing a great blessing upon an unworthy son.

I salute conservatives, whose ideal is gevurah. Conservatives serve in and support the armed forces and pledge to uproot the entire terrorist network.

The liberal dilemma can be stated as follows: We are good people, we see the spark of God in all but the worst specimen of humanity, we are compassionate. How, then, can we condemn entire groups of people, like the disenfranchised "Palestinians"? How can we, who have always upheld the freedom of religion, speak out against Muslims? Surely there is a reason why these people hate us; somehow, we must deserve it.

This dilemma is present on all levels in our lives. Take this personal example: I hire a man to work on my house. At first the work goes well; then one day he fails to show up. Since I am determined to be "nice," I do nothing. Three weeks later when he still has not put in an appearance, I judge him for the good: after all, he might be sick. In the fourth week, keenly aware that this man might judge all Jews by his experience with me, I still take no action. When he still has not reappeared by the fifth week, I begin to wonder if being "good" means being a victim.

Eventually I am able to get hold of him, and find out that he has indeed been sick and has been working mandatory overtime at his regular job. So what am I to do? Should I insist on getting my money's worth out of a man in ill health? Or should I just do nothing and hope the work is finished sometime before spring? Am I to be Simon Legree or Charlie Brown?

Be compassionate, but don't let this compassion turn you into a doormat.

The answer comes in the third trait called tiferet, harmony, where we avoid choosing one principle at the expense of the other and achieve synthesis. In tiferet, we are compassionate, we empathize, we hate the sin and not the sinner. But we do not let this compassion turn us into doormats. We act.

To be effective, chesed, loving kindness must contain elements of gevurah, strength. Abraham, the embodiment of chesed, acted. He defeated the kings who took his nephew captive, and he raised his arm to sacrifice his son.

Equally so, to be effective, gevurah must contain elements of chesed. It was an excess of chesed which caused Isaac to overlook the faults of his older son, and it was due to chesed that he accepted without recrimination the deceit that had been perpetrated upon him by Rebecca and Jacob.

Without the tempering influence and boundaries set by gevurah, chesed can run amok, as any parent who has a hard time saying "no" to a child readily understands.

Rabbi Simcha Bunim of Parshischo said that every person should have two slips of paper in his pocket.

On one should be written: "The world was created for me." (Chesed)

On the other should be written: "I am but dust and ashes." (Gevurah)

The trick is to have the wisdom to know which slip of paper to read at the right time.* (Tiferet)

In the case of my contractor, I eventually realized that he was as miserable as I was at his difficulties in honoring his commitments. By letting him slide, I was doing him a disservice. The sooner he finished the work at my house, the better off he would be. However, I could not force him to finish at my house if he was too ill to work, so I brought him chicken soup and supplements to help him get well. And then I called him every day and politely asked if he would be coming over to work that evening. This is compassion and accountability.

So, too, with the world situation. We must strive to understand the factors which have produced societies that support terrorism. We can feel compassion for the Arabs in Israel who have allowed themselves to be used as sacrifices for the profit of people who could not care less if they live or die. And, armed with compassion and understanding, we must do our best to prevent them from achieving their anarchistic goals.

Compassion must be tempered with boundaries if we are to be just, righteous, and moral, and alive.

Tsivya Weisgrau lives in Denver where she works as a legal secretary, studies Torah and tries to keep up with her children and grandchildren.

10 Basic Facts about the Israeli-Palestinian Conflict

The War in Gaza in an Nutshell

Making Terrorists Pay
Korach 5782: Visit to Lift the Spirit
That Time The Ivy League Found A Way To Limit Jewish Enrollment
Would You Rather Be Right or Happy?
Comments
MOST POPULAR IN Israel
Our privacy policy