Why Go To Poland? 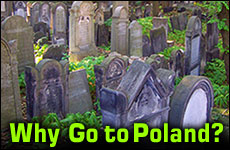 Although my daughter's trip boosted the economy of the very people who wished us dead, it was worth it.

When my daughter was accepted to a girls' seminary for a year of study in Israel, we were all delighted... until I found out that a trip to Poland was a required part of the curriculum.

My husband's entire family, with the exception of his parents, maternal grandmother, and a cousin, had been murdered during WWII. All but his maternal grandfather (who had been shot and killed while escaping over the border) had been sent to death camps in Poland. I know that anti-Semitism in Poland continues unabated, and I couldn't bear to think that such a trip would boost the economy of the very people who wished us dead, even to this day.

I spoke at length with Jews who had made the journey to Poland. I was especially moved when I heard Rabbi Paysach Krohn speak about his experiences there when he led a tour of the yeshiva communities of Eastern Europe. But I remained unsettled, uncomfortable, unconvinced, and not a little resentful that my daughter was "forced" to participate in the trip, and we parents were compelled to be supportive, both emotionally and financially (though the seminary's trip was heavily subsidized due to a generous sponsor).

In the coldest part of winter, my daughter and 180 other girls left Israel for Poland. They merited being in the yeshiva of Rabbi Meir Shapiro in Lublin during the worldwide Siyum HaShas (completion of the Talmud, a seven-year cyclical event), which was especially significant since Lublin is where Rabbi Shapiro began the page-a-day Talmud study program known as Daf Yomi that today has hundreds of thousands of participants around the world. They visited the grave of Sarah Schenirer, who founded the Bais Yaakov educational system for girls, in Cracow on her yarzheit. They visited former yeshivas and death camps. They had excellent guides, including Rabbi Hanoch Teller, whose gift of narrative brought history and shtetl life alive.

As anticipated, anti-Semitism was also still very much alive. While the group was gathered in a former synagogue, several Polish youths surrounded the shul from outside and peered into the windows, jeering and running their fingers across their necks, pretending to slit their throats and then pointing to the girls inside. In another gathering in a different city, Poles made their hands into a "gun" and pretended to "shoot" them. The girls were repeatedly heckled. They were told by the trip organizers never to walk in groups in smaller Polish cities and towns lest they call attention to themselves; that their lives might be in danger.

Jews of the pre-War shtetl were poor and living conditions were primitive. Often there was no electricity, no running water, no indoor plumbing; the streets unpaved and muddy and the food inadequate. But the synagogue was the center of every community, and any money the residents had went towards its beautification and upkeep, because it, and all it represented, was so important to them.

My daughter commented that it was a waste to use color film when photographing Poland in winter, since everything is so grey and bleak. In its countryside of grey -- grey sky, grey landscape, grey buildings (and many bars), and grey existence -- the few shuls that had been restored with historical accuracy by survivors' organizations shone like precious jewels. Many were decorated with beautiful hand-painted designs in bright colors, lit by polished lanterns and framed with magnificently carved woodwork.

Despite their abject poverty, Polish Jews prioritized, and their synagogues and yeshivas were their mainstay, in both a physical and spiritual sense.

As my daughter stood at the barbed wire of a death camp, she thought, "What gave these Polish Jews the will to live?"

Life in Poland, with its physical deprivation and anti-Semitism, was a constant challenge. Even before the war, there was hunger, disease, and pogroms. Why would one want to be Jewish in such an environment? Those "normal" conditions would deteriorate to an absolute nadir during the Holocaust, when cruelty peaked; fear, beatings, torture, starvation and the death of one's children and parents were the new "normal."

As my daughter stood at the barbed wire of a death camp, she thought, "Why go on? What gave these Polish Jews the will to live? Why did they fight so desperately to survive? And even if they did manage to survive, what was the point? What were they going back to? The same hatred and fear and danger and deprivation, only this time, without their loved ones?"

And my daughter thought of those beautiful, restored shuls in the shtetls. Of her own family, and her many nieces and nephews, who have arisen from those very ashes of the death camps.

Standing at the wire, the words of that Mishna came alive. The Jews of Poland, and Jews throughout history, no matter how grim their situation, fought desperately to survive. Not for themselves, but on behalf of Am Yisrael, the Jewish people. She understood with newfound clarity: "I matter. The smaller picture may look bad, but I am part of a way bigger and very important picture. I am a link in this great chain. Despite attempts to cut this chain throughout history, through hatred or assimilation, despite all the odds, it is up to ME to carry on and make sure this chain continues intact."

I still don't feel comfortable with the idea of going to the vast Jewish graveyard that is today's Poland. I would not consider a trip there for myself. But in these increasingly difficult times, my daughter knows why she is here, with a newfound sense of conviction.

That is why my daughter went to Poland.