Breaking Down the Walls 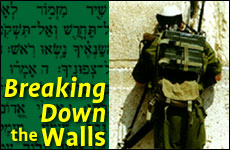 Having lived in Israel for the past 25 years, I am calmed by the knowledge that prayer is a potent force for security.

On a hot June day in 1944, my mother dragged her starving and emaciated body toward one of the many electrified fences in Auschwitz. A lifetime ago, it seemed, she and her family had stood face to face with Mengele. His cursed finger had pointed my mother's family to the left and to death. She had been sent to the right, to slave labor and, by the grace of God, to life. Now, on this hot and soul-numbing June day, she found herself near one of the fences dividing two parts of the Auschwitz camp, longing to be with her family, yet still clinging to life.

A girl standing on the other side of the fence noticed her and called out in Czech.

Turning her head, my mother saw a young girl of about 16 who stood shivering in fear and quaking from emotion. "Please, tell me, do you speak Czech or German?" the girl asked.

"I speak Czech," my mother answered.

"And are you Jewish?" the young girl asked.

"Yes, of course I am," my mother replied.

"Do you, perhaps, also know how to pray?" the girl continued.

"Certainly, but why are you asking all these questions?" asked my mother.

Visibly relieved, the girl explained: "I heard that we are being taken to the gas chambers tonight. I'm Jewish but I was never taught how to pray. I am terrified. If this camp is empty tomorrow morning, you will know that I'm no longer alive. If that happens, please pray for my soul. My name is Anichka."

Her heart breaking for this child just three years younger than herself, my mother reassured her and promised that should Anichka's camp be empty, she would pray for her.

The next day, the camp on the other side of the fence was eerily, irrevocably silent. Not one person remained. My mother tearfully fulfilled young Anichka's last request. Though Anichka had no idea how to pray, she knew that a Jewish soul is eternally linked to the concept of prayer, and perhaps she went somewhat "easier" to her death knowing that her Jewish soul would indeed be prayed for.

In the "Peace for Galilee" campaign in 1980, Israel sent forces into Lebanon to destroy the terrorist infrastructure there. One soldier from the secular Hashomer Hatzair movement found himself serving in a tank unit together with religious soldiers. War being war, one's likes, dislikes and religious affiliations become irrelevant in the body of a two-ton moving piece of metal -- a prime target for enemy fire.

In the midst of the shrieking shells and the crying soldiers, a soul-wrenching scream was heard: "Shema Yisrael! I don't know the rest!"

The soldier and his comrades-in-arms moved deeper into enemy territory, encapsulated in their tank. Too late, it became obvious that they were sitting ducks for Arabs who were just waiting for an Israeli tank to approach their position. As the soldiers desperately attempted to avert the ambush, the religious crew members started praying and saying Psalms out loud, begging God for salvation. Terrorist shells flew at them from all sides. It would be only seconds before one would make a direct hit and finish off the tank and its crew.

And moments later, an enormous "hook" from the Israeli side caught the trapped tank and yanked it to safety.

No matter how far a Jewish soul strays from its Source, when push comes to shove, a Jew knows that prayer does something. Somehow, a Jew in desperate straits instinctively reaches out to his Father in Heaven instead of looking for other avenues of salvation.

It is perhaps stories and thoughts like these that keep me calm as I live and raise my family in Jerusalem. In this war against terror, soldiers and security personnel brave the front lines -- at checkpoints and border, at buses and restaurants. And 4,000 years ago, our patriarch Jacob -- who battled against the Emorites using the power of prayer (Rashi to Genesis 48:22) -- taught us that prayer and security are deeply intertwined. As did Moses, who when battling against Midian, assigned 12,000 combat troops and another 12,000 to pray (Sifrei to Numbers 31:5).

Having lived in Israel for the past 25 years, through the Gulf War, the constant terrorist threats, the suicide bombing attacks, and the very real possibility of yet another war (God forbid), I am calmed by the knowledge that prayer is a potent force for security. And I am confident that all Jews, even those who have strayed far from "home," know they must call out so our Father will answer: "Here I am, children! Come home!"

A version of this article originally appeared in the Jewish Observer.

Where Were You CNN?

It is Difficult To Write About Tears

Israel: The Gateway of Hope

The Palestinian From Gaza Who Converted to Judaism
Korach 5782: Visit to Lift the Spirit
That Time The Ivy League Found A Way To Limit Jewish Enrollment
Would You Rather Be Right or Happy?
Comments
MOST POPULAR IN Israel
Our privacy policy