My Father and the Priest 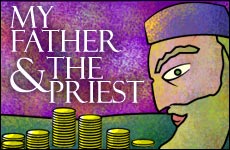 A Jew is never completely lost from his people. A true unbelievable story.

Almost 30 years ago, my father, Rabbi Dovid Schochet was asked to lecture to a group of Jewish and non-Jewish participants in the neighboring city of Buffalo. He decided to focus his lecture on the theme of charity, due to its universal application to both Jews and gentiles.

My father began with the following story.

A wealthy individual who never contributed to charity lived during the time of the Tosfos Yom Tov, a great Jewish sage. After this miser died, the Chevra Kaddisha (the society responsible for the burial and performing the rites on the body) felt that he was unworthy of being interned next to any upright and respectable individual and buried him, instead, in the area of the cemetery called hekdesh, reserved for society's outcasts and destitute.

A few days after the funeral, a tumult developed in Krakow. The butcher and baker, two prominent members of the community, who had hitherto been extremely charitable, suddenly stopped distributing their funds. The poor people, who had relied on the benevolent pair for their sustenance, now were in a state of uproar. Emotions ran so deep that the matter was finally brought before the Tosfos Yom Tov.

He asked the two why they had so abruptly terminated their worthy acts.

They replied: "In the past this 'miser' would continuously supply us with funds for charity. He strongly warned us, however, not to disclose our source, since he wanted the great merit of performing the mitzvah in a hidden manner. Now that he is dead, unfortunately, we are no longer able to continue."

Awed by the unassuming 'miser's' behavior, the Tosfos Yom Tov requested that he be buried next to this humble individual, even though this meant being interred in a disreputable section of the cemetery.

As my father concluded his lecture, a participant from the audience, who happened to be a priest, approached him and requested that he repeat the story. My father suggested they meet the following day. Thinking that the matter would be forgotten, my father was surprised when, at the appointed hour, the priest actually arrived at my father's hotel.

The priest, once again, pleaded with my father to repeat the story. My father obliged, but was astounded when, after concluding the story a second time, the priest seemed terribly distraught and begged him to repeat it, yet again.

At this point, the priest was nervously pacing back and forth across the room. Finally, he divulged the reason for his agitation. He turned to my father and confessed, "Rabbi Schochet, that charitable man in the story was my ancestor."

Skeptically, my father calmed the young man saying that there was absolutely no connection between him and the story, which took place hundreds of years ago. "Furthermore," he told him, "you are a gentile, while this man was Jewish."

The priest looked intently at my father and whispered, "Rabbi, now I have a story to tell you!"

He began by describing his background. He had grown up in the state of Tennessee. His father was a Major in the U.S. army during the Second World War. Overseas, in Europe, his father had met a Jewish girl and fell in love. He brought her back home as his war bride and no one knew of her background. A short time after their marriage, the couple was blessed with a child, whom they devoutly raised in the Catholic tradition. The child grew up and attended a Seminary where he eventually trained to become a priest.

In his early adulthood, the priest's mother died prematurely. At her death bed, she disclosed her secret identity to her completely baffled son.

After reciting the Shema prayer, she confessed, "I want you to know that you are Jewish."

After reciting the Shema prayer, she confessed, "I want you to know that you are Jewish." She informed him of his heritage and that his ancestor was buried next to a great sage called the Tosfos Yom Tov. She then recounted, almost verbatim, the story that my father had told in his lecture.

At the time, the priest imagined that his mother was delirious. Although he felt uneasy by his mother's parting words, it was only a temporary, fleeting emotion. As he got on with his life, he soon forgot the entire episode and lost interest in the subject.

"Rabbi," cried the priest, in a state of complete emotional upheaval, "you have just repeated this story, detail for detail. You have reminded me of my mother's parting words, and that the story must be true. Yet what am I to do? I am a reputable priest with a large congregation of devoted followers."

My father offered to assist him in any way. He emphasized to him, however, that according to Judaism, he was indeed Jewish. He encouraged him to explore his heritage, and put him in contact with people in his city who could guide him. With that, the weary, newly-found Jew departed.

My father had no future correspondence with this man, and heard no further from him.

Several years ago, on a visit to Israel, a bearded, religious Jew approached my father at the Western Wall, the Kotel, and wished him, "Shalom Aleichem."

My father didn't recognize the individual and was completely taken aback when the man exclaimed, "Don't you recognize me, Rabbi Schochet? I am the former priest whom you met in Buffalo!" He continued, "A Jew is never completely lost from his people."

PS. My father recently discovered that he is a direct descendant of the Tosfos Yom Tov.

Chana Weisberg is the author of four books, the latest, Divine Whispers -- Stories that Speak to the Heart and Soul . Weisberg lectures on issues relating to women, faith, relationships and the Jewish soul and has currently scheduled a worldwide book tour to promote her new books. To book a talk for your community, for information on her books or speaking schedule, please contact: weisberg@sympatico.ca

My Treacherous Journey across the Ethiopian Desert

Next Year in Jerusalem, Conclusion
The 21st President of the United States: Failure or Inspiration?
Hiding Their Jewishness
The Jewish Pope: Following the Questions Home
Comments