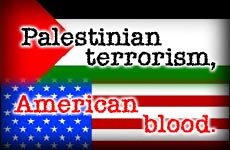 In the past 10 years, 51 Americans have been murdered by Palestinian terrorists.

Three Americans -- John Branchizio, Mark Parson, and John Martin Linde -- were murdered on Oct. 15 when terrorists in Gaza bombed the diplomatic convoy they were riding in. News accounts immediately described the attack as a first -- "an unprecedented deadly attack on a U.S. target in the Palestinian territories," to quote the Associated Press. But Branchizio, Parson, and Linde were not the first Americans to be murdered by Palestinian terrorists. They were the 49th, 50th, and 51st in the past 10 years alone.

A few hours after their deaths, the White House condemned "the vicious act of terrorism" that killed them, extended "heartfelt condolences to the families," and promised "to bring the terrorists to justice." The families of the many previous U.S. victims of Palestinian terror might reasonably wonder why there was no such presidential concern when their loved ones were massacred.

The families of previous U.S. victims of Palestinian terror wonder why there was no such concern when their loved ones were massacred.

The president did not vow to see justice done, for example, when Dr. David Applebaum and his daughter Nava died, on the eve of what was to be Nava's wedding day, in the bombing of Jerusalem's Cafe Hillel last month. Or when Cleveland native Alan Beer was killed in a Palestinian bus bombing in June. Or when four Americans -- Marla Bennett of California, David Gritz of Massachusetts, Benjamin Blutstein of Pennsylvania, and Janis Coulter of New York -- lost their lives in the bombing of the Hebrew University cafeteria last year. Or when Shoshana Greenbaum, a New Jersey tourist, was slaughtered in the horrific Sbarro pizzeria attack of August 2001. Or when, three months earlier, 14-year-old Kobe Mandell of Silver Spring, Md., was one of two boys stoned to death in the cave where Palestinian terrorists found them hiking. Or in April 1995, when Brandeis University student Alisa Flatow was murdered in a Gaza terror attack.

Americans have been dying at the hands of Palestinian terrorists for decades, yet the U.S. government and media rarely if ever portray Yasser Arafat and his lieutenants as avowed enemies of the United States. The State Department does not demand the extradition of Palestinian killers of Americans, not even when the killers' identities and whereabouts are known. President Bush has never given the Palestinian Authority the same ultimatum he gave the Taliban in Afghanistan: Hand over the terrorists or be destroyed...

Arafat and the Palestinian Authority were quick to distance themselves from the murder of the three Americans. But violence against Americans is routinely celebrated by the PA. "During the war in Iraq," notes Itamar Marcus, the director of Palestinian Media Watch, "the PA actively endorsed the killing of Americans, and even produced a music video celebrating the deaths of U.S. soldiers that was broadcast repeatedly on official PA TV." (An extensive compendium of anti-American hatred in the Palestinian media is posted at www.pmw.org.il.)

Palestinian officials renamed the central square in Jenin after the Iraqi suicide bomber who killed four U.S. Marines at a checkpoint in Najaf.

For years, sermons preached in Palestinian mosques and aired on Palestinian radio and television have rhapsodized about inflicting pain on the United States. "Oh, Allah, destroy America, for she is ruled by Zionist Jews," proclaimed Sheik Ikrima Sabri, the Arafat-appointed mufti of Jerusalem, in one such sermon. "O God, destroy the Jews and their supporters... destroy the United States and its allies," implored Sheik Ibrahim al-Mudayris in another. And from a third, Sheik Ahmed Abu Halabiya: "Have no mercy on the Jews, no matter where they are, in any country.... Wherever you are, kill those Jews and those Americans who are like them."

A few months ago, Palestinian officials renamed the central square in Jenin after Ali Jafar al-Na'amani, the Iraqi suicide bomber who killed four U.S. Marines at a checkpoint in Najaf on March 29. That is what Arafat and the Palestinian Authority think of spilled American blood.

There is only one rational response to the murder of Branchizio, Parson, and Linde last week: the destruction of the Palestinian Authority, a network of killers posing as a government. If that doesn't happen, this much is sure: the 49th, 50th, and 51st Americans to lose their lives to Palestinian terror will not be the last.

Originally published in the Boston Globe.

The Oct. 15 killing in Gaza had a bitterly ironic quality. The victims were three Americans, security personnel protecting an academic review committee en route to interview Palestinian applicants for the Fulbright program, an academic exchange funded and run by the U.S. government. The killers were Palestinian terrorists. The three, in other words, were murdered by Palestinians while on a humanitarian mission to help Palestinians.

But the irony runs deeper: According to the Israeli government, a current Fulbright scholar from the West Bank "is known as an activist" in Hamas -- one of the terror groups suspected in the bombing

He has a Ph.D. from Boston College, is an associate professor of philosophy and Islamic studies at Al-Quds University in Jerusalem, has written two books on a medieval Muslim thinker, and received an award from the Center for Theology and the Natural Sciences in Berkeley.

But when we inquired about Abu Sway, the Israeli government informed us of his Hamas ties. How can a person belonging to a group that possibly killed Fulbright-related personnel himself receive a Fulbright award?

Who duped the American taxpayer into funding an alleged activist in a terrorist organization? Why had no one in the Fulbright or FAU bureaucracies asked questions about Abu Sway's background?

J. William Fulbright, the Democratic senator from Arkansas, hoped that the program named for him would "bring a little more knowledge, a little more reason, and a little more compassion into world affairs, and thereby to increase the chance that nations will learn at last to live in peace and friendship."

In contrast, Hamas' highest priority is to establish an Islamic Palestine "from the Mediterranean Sea to the Jordan River" - in other words, a Palestine that does away with Israel. (Abu Sway echoes this view when he states that Palestinians need to "return to their homes from which they were uprooted in 1948.") That goal would appear to be in direct contradiction to the Fulbright program's spirit.

That the State Department both administers the Fulbright program and has listed Hamas as one of 36 Foreign Terrorist Organizations adds a surreal quality to this problem: State sponsors and pays someone accused of belonging to a group it itself has outlawed...

We Didn't Start the Fire
Korach 5782: Visit to Lift the Spirit
That Time The Ivy League Found A Way To Limit Jewish Enrollment
Would You Rather Be Right or Happy?
Comments
MOST POPULAR IN Israel
Our privacy policy