Being British for 350 years 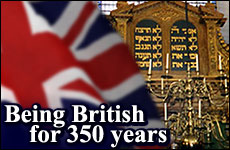 My family has been in Britain for 350 years. Perhaps it is time for a change.

People often ask me where my family is from, and when I tell them that I am 17th generation British, I am met with disbelieving and astonished looks. Most people assume that Anglo- Jewry is in the main no more than two or three generations long and has its origins in Eastern Europe.

The fact is my family has been in Britain for 350 years and unlike most of Anglo-Jewry today, we are Sephardim (Jews of Spanish and Portuguese ancestry). My ancestors were admitted to England shortly after the English Civil War when the Lord Protector Oliver Cromwell having won a raging battle against the Monarchists needed financiers to reinvigorate the war-torn English economy.

Rabbi Menassah Ben Israel of the Amsterdam community petitioned Cromwell to readmit Jews to a land which had not officially seen a Jew in over 360 years. Cromwell accepted the petition but not after a much heated exchange with those who sought to prevent Jews from being readmitted.

The first Jewish community in Britain for centuries consisted of no more than a handful of families who arrived from the thriving Sephardic Jewish community in Amsterdam to try their luck in London. After a few more years and the addition of new families, the first Synagogue was built, namely Bevis Marks, which still stands, although sadly under-used, in the City of London.

Britishness and being Jewish

My rich Sephardic-Anglo background, with its honorary titles and coats-of-arms, leaves me somewhat divided. While on the one hand I am proud of what British Jewry has achieved, on the other I am saddened by what being British has made the Jews.

"Britishness" is a hotly debated subject in those Isles today; many are asking what British means and how does one attain this appellation. As opposed to some other parts of the world, it is not done to apply an adjective to your nationality. You can not be "African-British" or "Asian-British." It is far more simple than that, you are either British or you are not.

Unlike most other minorities, Jews can hide all elements of their heritage and become "British". This has led to a quandary for many Jews, especially in this generation. Jews no longer want to be outsiders, and with help from a certain amount of antipathy, have morphed into the British cultural and social landscape with few, if any, discernable characteristics.

British Jews unlike their American counterparts have anglicized their names and their customs. My father and grand-father both felt it was necessary to change their name from the foreign sounding 'Pereira-Perez' to Perry as they went off to fight "Johnny-Foreigner" in the two world wars.

There is one people that has lived with the British for many years which reminds them that their 'civilization' is relatively new.

I have my own personal opinions as to why British mistrust and suspicion of the Jews is so different and perhaps at a higher social level than most other forms of world-wide anti-Semitism. The British consider themselves the height of civilization, the founder of democracy and the force that brought culture to much of the world. However, there is one people that has lived with the British for many years which reminds them that their 'civilization' is relatively new.

A good example of this was a retort by Prime Minister Benjamin Disraeli to an anti-Semitic remark aimed at him in the House of Commons, "When the right honorable gentlemen's ancestors were savages on an unknown Island, mine were priests in the Temple of Solomon," Disraeli responded.

The British, of which some tend to look down their noses at most other peoples and nations in the world, there is one amongst them who constantly remind them of their humble beginnings. I do believe that this rankles the British upper and literary social set, which finds its manifestations in the so-called "chattering classes." A few years ago Penelope Wyatt reported in the Spectator Magazine the remark of a peer in her upper-middle class social milieu, "Thank God, we can once again say what we want about the Jews."

While most in most western countries, anti-Semitism is usually the bastion of the underprivileged and those from the lower-socioeconomic classes, in Britain its strongest protagonists are to be found at the opposite end of the social spectrum.

As Anglo-Jewry celebrates 350 years since its re-admittance, I look back on my own familial Anglo-Jewish narrative with a mixture of pride, interest and a heavy dose of consternation. Anglo-Jewry faces an uncertain future as it struggles for its own self-identity. As for me, I have made my choice. At least from my side of the family there will not be an 18th generation British, as I have returned to Israel where my roots extend many times those of my sojourn in the British Isles.

Ashley Perry made aliyah from London over five years ago. He is currently working as a freelance writer/journalist/lecturer and has worked for many organizations including Aish HaTorah's Hasbara Fellowships. He currently works as a journalist for the European Jewish Press and as Development Coordinator for the Jewish People Project at the Jerusalem Center for Public Affairs. He lives in Efrat with his wife and daughter.

Why the Jews?
Don’t Believe in Other Gods Versus God is One
Seeing Without Eyes
Why Shouldn’t We Eat Whatever We Want?
Comments
MOST POPULAR IN Israel
Our privacy policy
Aish.com Is Looking for Great Writers