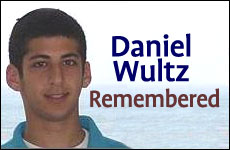 Daniel touched those who knew him with his passion for life, family, Judaism and Israel. His short life can still touch yours.

Miami-Dade County was recently reported to be the road rage capital of the nation. We have the art of honks, swerves and just plain angry driving down pat.

But on the same day that we were crowned road-rage queen, the citizens of South Florida demonstrated the ability to lose this dubious distinction -- to be polite, respectful and downright patient.

That same day, I drove in a 300-car procession that closed I-75 southbound and Sheridan Road to all other traffic. Hard to believe, but at 5:30 p.m. on May 16, more than 600 people had the roads to themselves, while we escorted an inspired and clearly inspiring young man to his final resting place.

I drove in awe as hundreds of strangers paid their respects by quietly sitting in their cars as we passed by. No one honked, tried to cut in, or made ugly gestures. At the height of rush hour, parents waited patiently to return home and hug their children, while Sheryl and Tuly Wultz passed them by with arms that will forever long to hold their son Daniel once again.

Stopping traffic was just one small sign of Daniel's greatness. In his struggle to survive his wounds from the April 17 terrorist attack in Tel Aviv, he brought thousands of people to pray and do good deeds for his recovery.

He brought a unity and commitment in purpose to his friends, acquaintances and community, as we rallied behind him and his family. He caused hundreds of strangers to meet and become friends in the process.

Daniel brought out greatness in his parents, sister and family. In their pain, they showed us what love and caring is really about. They didn't scream for vengeance, or return the words of hate coming from their son's killers.

They quietly asked the world to pray for their son, and to keep praying and keep thinking good thoughts some more. They avoided the media spotlight to focus on the one thing that mattered to them -- Daniel's recovery.

And in this, they inspired us all to come home and hug our kids a little more, listen a little better and play one more hand of Go Fish. We didn't get annoyed with the random scatter of our kid's stuff or the fifth request for one more glass of water. Our kids are alive, walking, running, breathing on their own. And so are we.

Because we are alive, we can recall this young man who loved life, family, Judaism and Israel.

We can help repair the world with acts of kindness and love.

We can think about Daniel who sat with the little boy on the bus and waited with him at the bus stop when his mother was late picking him up. We can remember to show appreciation just like he showed his teachers and family. We can take a few minutes to throw hoops or jump rope with the special kids in our neighborhood, just like Daniel played basketball with the special needs kids at the summer camp where he worked.

We can say a prayer for peace in Israel, the land that Daniel loved and ultimately died for.

We can seek wisdom and understanding. Daniel, who had his rabbi on speed dial, wouldn't hesitate to ask him difficult questions or debate the meaning of life and how to be a better person with his father and friends.

We can help repair the world with acts of kindness and love -- a smile, a kind word to help achieve a world of peace and understanding, long promised in Jewish tradition and, clearly, yet to arrive.

Daniel's short life and his suffering were not lost on the world. He touched his friends and family with his energy, enthusiasm and passion for family, Judaism and life.

And, for a few minutes on May 16, Daniel stopped the road rage in Miami.

This article originally appeared in the South Florida Sun-Sentinel.

Mimi Jankovits is the director the One Family Fund, Southeastern region.

One Child at a Time: Transition from Genesis to Exodus

Faith in the Depths of Hell

7 Ways You Could Help Israel
The Blue Beyond
Great Place to Live
Is Eating Supposed To Be Spiritual?
Comments
MOST POPULAR IN Israel
Our privacy policy