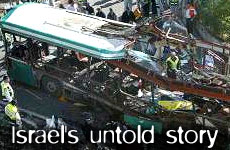 No sound, no fury. The international silence once again thunders in Israeli ears.

You probably heard about the suicide bombing that brutally claimed the lives
of eleven Israeli bus passengers two weeks ago. One of the victims was a young
woman with whom I worked until just a few weeks ago. Her name was Dana
Itach. She was completely blown to pieces. They identified her by her
teeth.

There were dozens more who were pulverized, crushed, scalded and
sliced open but who managed to survive. One of them is a friend with whom I
only recently became acquainted. His is a story you may not have heard.

I visited him in the hospital the day after the bombing. Very weak,
eyebrows singed off entirely, face splattered with blackened blood stains
and red lacerations, he opened his eyes just after I walked into the
hospital room.

When I saw him I tried to put on an appropriate expression
that would hide my fear at seeing his wounds. And I had no idea what to
say. But by the time I was by his bed, he relieved me of my inability to
start a dialogue. He managed to focus his rolling, glassy,
morphine-intoxicated eyes and, in a barely audible and scratchy voice, his
words slowly leaked out.

"You're lying there in absolute agony and there's no one there to help you. And I thought, 'If I leave it's a victory for the enemy.'"

"There was a great, bright, searing, yellow light.
And the sound, it's something I can't describe. And then I was lying there
and I realized it was a pigua (terror attack). And then I looked down and I
thought, 'Oh no, my leg is gone from the knee down'. But it was just a piece
of someone else's bloody flesh that had wrapped around my leg. And I thought
'Maybe I should finally leave this country.' You're lying there in absolute
agony and there's no one there to help you. All these thoughts were going
through my head. And I thought, 'If I leave it's a victory for the enemy.'"

For the next six months he will be recovering from a shattered knee cap, a
severed vein in his leg, shrapnel wounds, severe internal contusions and a
number of surgeries. In addition, he will be dealing with the psychological
wounds as well. Two weeks after the bombing, he is notably stronger. He has taken several steps with a walker and he is actually able to move himself, very gingerly, within his bed in order to find a position which is a little less painful. But he
is exhausted and mentally tormented. He confided, "Every day I'm fighting
to keep my sanity... I'm not sleeping; the dreams keep me from sleeping."

THE OTHER UNTOLD STORY

Even if you did pay some attention to this latest genocide bombing, my
friend's story, his agony, his long road of recovery ahead is probably a
story of which you weren't aware. But it's only one of the stories to which
you likely didn't hear. The other untold story follows.

Shortly after the bus bombing, a lone Israeli Mosad-trained operative,
secretly and specifically trained for his mission, commandeered a private
Palestinian truck just outside Ramallah in the West Bank. He flagged down
the driver by the side of the road, and, when the driver stopped to help
him, he climbed into the passenger seat of the truck's cab and withdrew a
Walther P-22 rimfire handgun, specially fitted with a silencer. In the
truck's payload area were some 25 local Palestinian passengers from the
nearby West Bank town of Al-Hadiri, who were taking their regular weekly
ride to Nablus.

He calmly surveyed the faces of those remaining in the truck. Then, with
the almost-imperceptible dexterity of the oft-practiced move, he reached
under his jacket toward his belt with his free hand, unhooked a
high-explosive fragmentation grenade, pulled the pin, held it momentarily, and
then tossed it into the truck's payload area. He ran several steps hard toward the
passengers whom he had forced to lay down on the ground, diving for cover
beside them. The ten passengers in the truck were instantly vaporized,
spewed into pieces and scorched to death, remains of limbs flying in all
directions.

How could it be that you did you not hear of this latter story? Within an
hour, much of the world expressed its revulsion and outrage at the Israeli
attack. Most European countries immediately cut diplomatic relations with
Israel, banishing the respective Israeli ambassadors from their lands and
closing all Israeli diplomatic missions. Most African nations vowed support
for Yasser Arafat and sent senior diplomats to visit the poor, shaken man in
his office (only 150 meters from the attack site).

Throughout the Middle East, hundreds of thousands of outraged citizens took to the streets decrying the barbaric violence and vowing to end Israel's reign of terror.
Syria, Lebanon and Egypt massed troops along their respective borders with
Israel. The United States censured Israel in harsh and unequivocal terms
and cut 40% of its annual aid package to Israel. Israel was never so wholly
isolated. How is it that you did not hear of this?

The reason you didn't hear any of this is because the second story contains
two vital inaccuracies: First, the operative involved was not an Israeli
Mossad agent; rather he was a Palestinian policeman from Bethlehem named Ali
Muneer Jaara.

Second, the people he coldly murdered with shrapnel-packed
explosives and those he cruelly injured were not Palestinian commuters
within 150 meters of Arafat's headquarters; rather they were Israeli
commuters who were attacked within 150 meters of Israeli Prime Minister
Ariel Sharon's home in Jerusalem.

With these two inaccuracies thusly corrected, you did, in fact, know all about the second story. It was, in fact, the same story I recapped at the start: the genocidal bombing of Israeli commuters in Jerusalem two weeks ago; the bombing in which my former co-worker was murdered and my friend was deeply wounded along with dozens of others.

In fact, the real untold story, the part that truly went unheard by
definition, was the near total absence of international reaction against the
Palestinian-supported policy of brutal violence and terror, a policy which
manifested itself in almost exactly the same way as my fictional account of
the murder of Palestinian commuters occurred. There was the same coldly
premeditated plan of murder, the same surveying of the victims faces before
the act; and the same rending of human flesh and bone with fire and iron.
The same political statement by conducting the mass murder within 150 meters
of the political leader's home. The fictional account, with Palestinian victims, lead to (fictional but not unexpected) worldwide outrage. The actual account, with Israeli victims, lead to worldwide silence.

The real untold story is untold because it made no sound, no fury, no
ripples and no impression on those who control Palestinian strategy. It was
the relative international silence -- as Israelis were cut down and cut up,
flesh shredded within 150 meters of their Prime Minister's residence -- that
once again thunders in Israeli ears.

Where were the forceful condemnations? Where were the morally correct governments of the West de-crying this crime against humans and following up with practical actions and consequences?

Where was the flood of foreign diplomats dispatched to Israel to show
support? Where were the street demonstrations by morally upright and aghast
citizens of the world bitterly condemning the barbaric violence against
Israelis? Where was the cutback in financial support to the Palestinian
government? Where was the expression of outrage? Where was your cry of
revulsion, your scream for an end to the continual, purposeful, intended,
directed annihilation and mutilation of simple Israeli commuters?

Would you have done so if my fictional account was true? If so, why didn't you do so
this time?

The untold story is not new. But its duplicitous and silent continuance is
a thunderous death-knell for more Israelis. Beyond Israel, as citizens of
Bali and Moscow and New York and Istanbul know, your co-worker or friend
could be next.

Lee Wolfe was born in Toronto, Canada. He graduated from the University of Toronto with degrees in Computer Science and French Literature. He travelled around the world for two years, a journey which included learning in Israeli yeshivot, and moved to Israel in January 2001. He lives in Jerusalem where he works in marketing and occasional freelance writing.