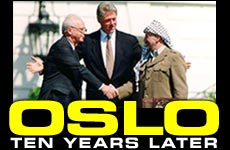 Why Oslo's hopes turned to dust.

Ten years later, it is embarrassing to recall the elation and soaring expectations.

President Bill Clinton lauded it as a "great occasion of history." Secretary of State Warren Christopher ruminated on how "the impossible is within our reach." Yasser Arafat called it an "historic event, inaugurating a new epoch." Foreign Minister Shimon Peres of Israel discerned in it "the outline of peace in the Middle East."

The press hyped it, providing saturation coverage on television and radio, in newspapers and magazines. Pundits like Anthony Lewis of The New York Times called it "ingeniously built" and "stunning."

The date was Sept. 13, 1993, and the occasion was the signing of the Oslo accords on the White House lawn. Yitzhak Rabin, Israel's prime minister, and Arafat, the Palestinian leader, stood by President Bill Clinton and shook hands. For years afterward, "The Handshake" (as it was known) served as the symbol of successful peacemaking.

The agreement they signed, the "Declaration of Principles on Interim Self-Government Arrangements" (to use its formal name) inspired widespread optimism that the Arab-Israeli conflict was at last about to be resolved. Other than a hardy band of skeptics, the world saw in the Oslo accords a brilliant solution whereby each side would achieve what it most wanted: dignity and autonomy for the Palestinians, recognition and security for the Israelis.

Instead, Oslo brought the Palestinians poverty, corruption, a cult of death, suicide factories and militant Islamic radicalization. The Israelis have mainly suffered from terrorism's toll of 854 murders and 5,051 injuries, plus assorted economic and diplomatic losses.

This Saturday marks the 10th anniversary of Sept. 13, 1993. By now, the name "Oslo" is mud among Palestinians and Israelis alike, with no one anymore seeing it "inaugurating a new epoch" -- except for the worse.

The deal rested on a faulty Israeli premise that Palestinians had given up their hope of destroying the Jewish state.

Many things, but most important was that the deal rested on a faulty Israeli premise that Palestinians had given up their hope of destroying the Jewish state. This led to the expectation that if Israel offered sufficient financial and political incentives, the Palestinians would formally recognize the Jewish state and close down the conflict.

Israelis therefore pushed themselves to make an array of concessions, in the futile hope that flexibility, restraint and generosity would win Palestinian goodwill. In fact, these steps made matters worse by sending signals of apparent demoralization and weakness. Each concession further reduced Palestinian awe of Israeli might, made Israel seem more vulnerable and incited irredentist dreams of annihilating it.

The result was a radicalized and mobilized Palestinian body politic. In speech and actions, via claims to the entire land of Israel and the murder of Israelis, the hope of destroying Israel acquired ever-more traction.

Thus did the muted Palestinian mood at Oslo's start in 1993 turn into the enraged ambition evident today.

When intermittent Palestinian violence turned in September 2000 into all-out war, Israelis finally awoke from seven years of wishful thinking and acknowledged Oslo's disastrous handiwork. But they have not yet figured with what to replace it. Likewise, the U.S. government, with the collapse of its Mahmoud Abbas gambit last week, finds its "road map" diplomacy in disarray, and it now too needs new thinking.

In the spirit of Oslo's 10th anniversary, I propose a radically different approach for the next decade:

When, over a long period of time and with complete consistency, the Palestinians prove they accept Israel, negotiations can be re-opened and the issues of the past decade -- borders, resources, armaments, sanctities, residential rights -- be taken up anew. The sooner we adopt the right policies, the sooner that will be.

What is an Intifada?

PM Netanyahu’s Speech to the UN

Hatred in Britain
The Blue Beyond
Great Place to Live
Is Eating Supposed To Be Spiritual?
Comments
MOST POPULAR IN Israel
Our privacy policy