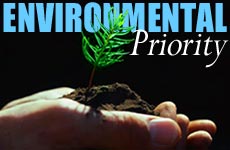 There is one country in the world that has devoted over a century to reforestation and greening the land. And I'm not talking about the United States or Liechtenstein.

There is one country in the world that ended the 20th century with more trees than it began with; a country that has devoted over a century to reforestation and greening the land. I'm not talking about the United States or Liechtenstein.

In the beginning of the 1900s, this country's indigenous forests were just about completely eliminated by centuries of neglect, with hundreds of years of warfare, grazing and logging taking a heavy toll on environmental resources. When it declared independence, there were fewer than five million trees in the entire expanse of the country. Today it boasts over 200 million trees.

It was a desolate barren land covered in deserts, forgotten and ignored by many. It's particularly rare in this day and age, in a world where just about every country is tearing apart their forests to have one country with very limited resources, devote its time to restore its beauty to what it was centuries ago.

Mark Twain in the 1800s, visited this place and described it as, "a desolate country whose soil is rich enough, but is given over wholly to weeds... a silent mournful expanse... a desolation." Not so, anymore.

Twain's description of this place reminds me of how the land looks in the end of "The Lorax" by Dr. Suess, a place which has been scrapped to the bone of any natural resources.

In the meantime, this nation has been working hard to reintroduce to the land animals that were hunted to extinction. Many animals mentioned in old texts could no longer be found here when independence was declared half a century ago, also victims of centuries of neglect and over-hunting.

The Fallow Deer was gone from here and was thought to be completely extinct until a herd of 25 was found in the '50s in Iran, according to the World Wildlife Fund. By 1972, the Oryx was completely extinct in the wild, and WWF reported the Roe Deer was hunted to extinction over 50 years ago as well. This nation has been on a continuous mission to restore its land to its diverse wildlife, so far succeeding in reintroducing all these animals into the wild, many of which can now only be found in the wild, in this place.

Today there are 116 different species of land animals in the country, compared with 140 in all of Europe, a landmass 300 times bigger.

Today there are 116 different species of land animals in the country, compared with 140 in all of Europe, a landmass 300 times bigger. This country also boasts 373 nature reserves, which make up 16 percent of its land area. Species now being raised for future release into the wild include the White Oryx, Ostrich, Persian Fallow Deer, Roe Deer and Asiatic Wild Ass, a feat that was once thought to be completely futile.

I'm very happy to see that this country, already plagued by terrorism and a struggling economy, is willing to devote so much time, energy and money to helping the environment. Able to both care about its people and its surroundings suggests that this country is a model to us all on protecting our dwindling natural resources.

When it comes to fossil fuels, this country has made a concerted effort to use renewable energy. The world's largest solar power station is currently under construction here, according to www.distributedpowersolutions.com, while just about every home sports a solar panel used to heat water.

As countless animals are reintroduced into the land while dozens upon dozens of animals are becoming extinct daily in the rest of the world, I am inspired -- inspired that there are places out there that make the environment a priority, and do not use the economy or a struggle against terror as an excuse.

This country is none other than Israel, a country once just about completely denuded of its natural treasures. The United States, and the rest of the world for that matter, should look at Israel as a guide, leading all of humanity into an age of greater environmental awareness.

Gilad is a Hasbara Fellow.

Still Crazy: Why We Made Aliyah
Bechukotai 5782: Divine Retribution
Behar 5782: Working to Live or Living to Work?
The Wholeness of Being Broken
Comments
MOST POPULAR IN Israel Diary
Our privacy policy