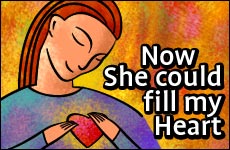 How could I feel God's presence while crowded with cancer, ugliness and pain?

My body felt awful, sick and aching from the cancer with which I had just been diagnosed. Over the past months, as I had tried unsuccessfully to fight colds and infections, a tumor had been growing inside my chest, sapping my strength and will power. The pain I felt today was partly physical, and partly the burden of knowing I had cancer. But despite it, I sat cross-legged on the floor now for a pre-davening meditation. To help me in my healing, I summoned a familiar image. My hollowed-out body would be a temple, a resting place for God's presence on earth, the Shechina.

I began by inviting the Shechina into my feet. Until my diagnosis, these feet had carried me upstairs to teach my third grade class even when I was so ill that I had to stop at each step to catch my breath. I had stood on these feet during the entire workday, walking from desk to desk. Even after the children had left, they had taken me through the building to meetings, to the school library and to colleagues. These were hardworking, loyal feet. The Shechina could reside happily in these feet.

I moved on to my legs. I had folded them beneath me daily to sit on the carpet with my students. They had grounded me in a class of 23 children whose minds were far from the task of learning. These young children, who had already seen more than their share of drugs, gangs, violence and death, each needed my full attention at all times. I had often faltered, losing patience with them and yelling, or going home to my husband and weeping at my inability to fix the problems in their lives. But my legs had done the best they could to take me to those children. I could imagine the Shechina in my legs.

Next I came to my stomach. Here I felt another kind of pride. In the past five years I had improved my kashrut standards. I no longer ate out in non-kosher restaurants and I was more careful about looking for reliable supervision symbols, hekshers. God could not find fault with me here. The Shechina could be proud, and I imagined her filling my stomach.

It was a dark time for me. I couldn't be hopeful and positive the way some cancer patients seem to be. But then something happened.

But now I was at my chest and I didn't know what to do. It was crowded with cancer, ugliness and pain. My chest was filled with sickness, and sadness too. I had become so weary of teaching that I had stopped enjoying it and came to work only because I had to. The Shechina would not want to come in a place so lacking in love. I felt a failure. I wasn't good enough, and I felt as though she left me entirely.

In Judaism we understand that suffering always serves a purpose. It may build character or bring hope to others or prevent a greater suffering later. There are so many options, most of which we can never quite guess as God's purpose. But now I did try to guess, and in doing so, I assumed that my suffering was punishment. If there was a cancer in my chest, I felt I must have done something wrong and that now God would distance Himself from me because of it.

But what? What could I have done? I had been struggling simply to rise each morning and still had been working as hard as I could to be the best teacher, the best wife, the best daughter, sister, friend and Jew that I could be and I simply couldn't push any further. What was the point in asking for help from a God who punished people even when they were doing the best they could?

It was a dark time for me. I couldn't be hopeful and positive the way some cancer patients seem to be. But then something happened. I learned from the teacher who took my place that one of my students had committed a serious theft. This boy suffered not only from an extreme learning disability, but also from poverty, an abusive father and a neglectful mother. I was not completely surprised that this child had done something wrong. He often misbehaved. But theft was much worse than shouting out in the classroom.

When I heard of what he had done, I was furious. I wanted to grab him by the shoulders and shake sense into him. But I knew that the anger I felt could never be so deep if it had not been charged with love. I wasn't upset about the theft itself. I was upset that his unhappiness would lead him to steal. And I knew that if someone would just love him and take the time to attend to his pain, he would not steal again.

If I could love this student so strongly, perhaps it was unreasonable to doubt God's willingness to love me too.

Realizing how I felt about him made me rethink my own situation. If I could love this student so strongly, perhaps it was unreasonable to doubt God's willingness to love me too. If I could use God's love to help me heal my own pain, maybe I would grow too. Instead of seeing my pain as a punishment for not being good enough already, I could use the process of healing to become a better person.

So I surrendered. I allowed myself to rest, sleep, write, read and sometimes do nothing at all. I let my husband take care of me and stopped pressuring myself to accomplish too much in a day or to worry about what others thought. I remembered my friend who had just had a baby. She told me that her whole day was now structured according to when the baby needed to eat and rest. I imagined I was caring for a baby too, a baby that deserved patience and a gentle touch. The baby just happened to be me.

Gradually, I transformed. As I stopped demanding so much from myself, I began to care about the people in my community. I had not even realized how often during Kiddush at shul I had avoided others. I had always said small talk was a waste of time and had claimed to feel little connection with them. But now, even when they said awkward things about my illness, I began to look forward to seeing them. I cared about what happened in their lives as much as I had cared about my students.

As I let go of judging myself so harshly I found I was able to let go of judging others too. This helped me in all of my relationships, from friends and family to people I barely knew. It began with becoming more comfortable with my people in the community and developed into better understanding between me and my husband as well as my parents and brother. I became more patient of others. I grew aware of my own perfectionism and began to temper it. To this day I continue to learn how to be more understanding of the people I love the most.

The shabbos after I was declared to be in complete remission, the men of the shul danced and sang mazel tov while the women cried and hugged me. Before I might have felt embarrassed, but now I embraced them back with an unexpected love.

When I look back now, I remember that at the time of my diagnosis, the tumor in my chest had grown so large that it was actually squeezing and weakening my heart. As the cancer was eradicated from my body, it stopped squeezing. I learned to do the same, and removed the pressure from my heart. In the end, this was what helped it to beat freely again. And the Shechina could now fill my heart.

The God of Large and Small

The White Fedora
Don’t Believe in Other Gods Versus God is One
Seeing Without Eyes
Why Shouldn’t We Eat Whatever We Want?
Comments
MOST POPULAR IN Spirituality
Our privacy policy
Aish.com Is Looking for Great Writers