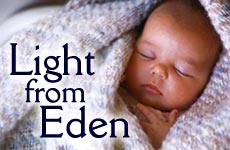 Three days after Adam was buried, Shoshana and her husband, Dov, decided to try to have another baby.

Her heart swelled with joy as Shoshana Weinstein held the sweet-smelling baby daughter nestled in her arms.

Less than 1.8 kilograms, Eden had a head full of straight black hair. Bittersweet tears filled Shoshana's eyes as the light fell on the familiar chin dimple. Her son Adam had that dimple. But Adam had been gone nearly two years -- murdered at age 14 by a suicide bomber in Jerusalem.

Three days after Adam was buried, Shoshana and her husband, Dov, decided to try to have another baby. Shoshana was 48 and she had needed fertility treatment to have each of their three sons when she was so much younger.

Adam was the third. The baby nurse who predicted that the dark-eyed handsome infant would have a serene personality was right. Adam was a good student, handsome, a chess whiz, fascinated with electronics, and easy-going. Like Shoshana, a bank teller, and Dov, an accountant, he was particularly good with numbers.

The Weinsteins lived in Givon Hahadasha, a village 10 minutes from Jerusalem. On December 1, 2001, Adam and his ninth-grade friends decided to go out for pizza and ice cream. They were too young to drive.

A friend's mother offered them a ride to downtown Jerusalem where fast-food restaurants and cafes were open late.

Shoshana and Dov had gone to sleep, but at 11:15 p.m. she woke up with a start. Her heart pounded with dread. She phoned her son Iddan, a soldier on the border, to make sure he was okay. Then, on impulse, Shoshana phoned Adam. She felt silly when she heard teenagers laughing and singing in the background. Suddenly Adam said, "Mom, I love you. I miss home." The strange emotional outburst was unlike her son.

She was still awake at 11:30 when her middle son Assaf, 19, ran into the bedroom, waking Dov. There had been a terror attack. "Someone saw Adam lying on the ground near an ambulance," he said.

Adam wasn't in any of the hospitals, and his name didn't appear on any of the lists of the wounded.

Assaf volunteered to go to the L. Greenberg Institute of Forensic Medicine at Abu Kabir.

He returned with the horrifying news. Ten boys had been murdered by the bombers. One of them was Adam. Even as they wept, Assaf said the strangest thing. "You need to have another baby."

Shoshana was shocked. "How can you talk like that? Your brother isn't even buried yet!"

But Assaf was adamant. "If I don't say it now, it will never happen."

Thousands attended Adam's funeral, including ninth-graders from his class.

During the days of mourning, the house was always full of visitors. But late one night when they were alone, Dov told Shoshana he had to speak to her.

She looked at his unshaven face, and red eyes. "I know what you're going to say," she said.

Over their 26 years of marriage, they had often been able to read each other's thoughts.

"We should try to have another baby," he said.

Even though it seemed far-fetched, the idea resonated deep inside her. Shoshana nodded. "I won't stand in the way. I'll do everything possible. The rest is in God's hands."

Shoshana consulted her rabbi. "He wished me success, but he didn't promise me success."

She felt a mix of ecstasy and fright. A new baby! All at once she thought of everything that could go wrong.

Dov was still wearing his mourning beard when they went to Prof. Drorit Hochner at Hadassah-University Hospital, Mount Scopus, where Adam was born. Dr. Hochner had helped Shoshana get pregnant back then. In the intervening decades, Hochner had become an expert in high-risk pregnancies. "I understand," said Hochner, "these aren't normal times."

Hochner collaborated with an IVF expert, but the first two attempts failed. Shoshana was ready to give up. Then her phone rang.

"The moment I heard Dr. Hochner's voice, I knew I was pregnant." She felt a mix of ecstasy and fright. A new baby! All at once she thought of everything that could go wrong.

Just about everything that could go wrong in a pregnancy did. She worried most about the ultrasound reports, which revealed that the baby was much smaller than usual.

In the 36th week, Shoshana felt uncomfortable and restless. Hochner examined her, and said, "I want to deliver your baby now." Shoshana was pleased that the baby was choosing her own birthday, but as she was wheeled into the delivery room for a cesarean section, Shoshana panicked. "I spoke to Adam in heaven and begged him to watch over me. If anything happened to me in the birth, he should watch over Daddy."

She was shaking from head to toe.

When she woke up, the nurse brought her the little girl. At first, she was terrified to look at her. At last, she gazed down into that beautiful little face.

So new -- this little stranger in her arms. And then she saw the dimple.

Says Shoshana, "I look down on her, and I'm filled with a mix of joy and sadness. I'll never forget Adam, but Eden will be her own person, not living in his shadow. She's a light in this household - just like the miracle of Chanukah. I've learned that God gives you the strength to deal with the challenges that face you."

I Moved to Israel, Alone, When I was 15
The Miami Boys Choir is Taking over TikTok
Caramelized Onion and Pumpkin Pirozhki
For Every Individual, A Torah Scroll
Comments
MOST POPULAR IN Israel
Our privacy policy
Aish.com Is Looking for Great Writers