The Dangers of Criticism 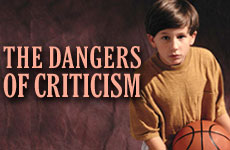 There is a big difference between lashing out with insensitive criticism and admonishing with respect and love.

David gets into his first car accident two months after getting his license. He calls his Dad from the scene of the accident, assures him that no one is hurt, and breaks the news that the car is pretty banged up. "I knew I shouldn't have let you get your license so young," fumes his Dad."You're just not a careful enough person".

Sarah forgets her lunch again. Her Mom, who always brings it to school when Sarah forgets, hands her the lunch, rolls her eyes and says,"You'd forget your head if it wasn't attached."

Criticism is the quickest way to both diminish a person's self image and poison a relationship.

While the Torah commands us to admonish our fellow man when he is behaving improperly -- "You shall rebuke your neighbor" (Leviticus 19:17) -- it also tells us how diplomatically this must be done. There is a big difference between lashing out with insensitive criticism and admonishing in a way that shows respect, concern and love.

Insensitive criticism can be pointing out what you don't like in a non-constructive way, fault-finding, judging, disapproving or name-calling:

Frequent criticism tears at self-esteem. Even one particularly hurtful remark can remain ingrained in a child's consciousness.

Our words to our children carry so much weight. If we tell them they are mean, inconsiderate or irresponsible, they will assimilate this as part of their self image.

Young children particularly do not have the intellectual maturity to question our evaluation of them, let alone not let it bother them. For example, if we say to a 3-year-old who just spilled his juice all over his shirt,"Can't you drink this without making a mess of yourself?" the child will NOT think: "You know, I think my parents have too high expectations of me. I am only 3-years-old. As a matter of fact, I would say that the majority of my fellow nursery school friends come to school with some portion of their breakfast on their shirt. So I am not going to let this bother me!"

The mother in the above example, could have easily said instead: "Honey, if you would just tip your cup a little more slowly I bet it would all go in your mouth!" That type of statement is both instructive and encouraging. It tells the child what to do in order to not spill his juice and sends the message that the mother believes he is capable of getting it right.

Here are few more examples of criticism vs. encouragement:

Criticism:"Is that what you call making a bed?"
Encouragement:"Thank you for making your bed. I appreciate that that. You did such a good job that I think you are ready to learn the art of hospital corners!"

Criticism: "You got a C again? It's no wonder with your study habits!"
Encouragement:"I think if we worked on a nightly study schedule with you that you could easily pull a B next quarter."

Common sensitivity you say? Unfortunately, parents all too often get annoyed and frustrated and forget about speaking in an encouraging manner. It is quite difficult to always be conscious about the way we are phrasing things to our children.

The Torah gives us guidelines about admonishing our children when they have done something wrong. For example, the Talmud teaches that rebuke should not be given when a parent is angry (Shabbat: 105b). A parent is allowed to feign anger in order to impress upon the child the gravity of what he did, but it should only be anger of the face and not anger of the heart.

I once heard a story of a rabbi who waited two weeks before he called his son in about something he was very angry about. It took the father that long to get to a place where he felt he could speak to his son in the proper way. Do we have such emotional self-restraint?

I heard another story about a rabbi in a Jewish day school who had what he called his"discipline jacket." When he needed to discipline his class he would go to his closet, take off his regular jacket and put the discipline jacket on. He explained that the time it took to go through this routine was usually enough time to cool down a little and think about how to phrase what he needed to say to the class. Imagine the lesson these children learned from him about not speaking in the heat of the moment!

Rebuke should also be given in private so as not to embarrass the child.

The Torah also teaches that rebuke should also be given in private so as not to embarrass the child. (See Maimonides, Laws of Character Development, 6:7.) Even in private great care must be taken not to shame the child. Say the least that you can say to get the point across in an effective manner.

Rebuke should be given pleasantly and softly. Children learn to tune out parents who yell and do not learn from them. Yelling can also tell a child,"I don't like you."

The laws of how to properly rebuke are too many to include in this article. (Anyone interested in more detailed information should refer to Love Your Neighbor, by Rabbi Zelig Pliskin pp. 270-292.)

When we carefully consider the effect of our words on our children's self concept, hopefully, we will be motivated to move away from harmful criticism to more constructive and encouraging forms of admonishment.

Chana Heller, MSW, is the mother of five children and grandmother to many. She works for Aish Los Angeles as Director of JWI - Jewish Women’s Initiative. She is married to Rabbi Dov Heller, a psychotherapist and teacher at Aish LA.

The Day the Coach Quit: How Parents are Ruining Sports and Their Children

Raise Your Kids without Raising Your Voice:The $100 Ticket