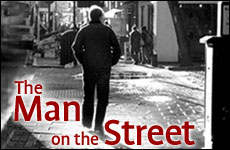 My one minute encounter in Hungary reflected all the despair and all the hopeful triumph of the Jewish people in exile.

Hungarians are not shy. At least during the year I spent teaching in their capital, Budapest, I never observed the slightest reticence among the city's residents.

No doubt I stood out a bit, riding the local trolley with my untrimmed beard and black fedora -- a combination that had blended naturally into the scenery of Jerusalem, from where I had come.

I soon became accustomed to the gazes I drew from other passengers. Unlike most westerners who look quickly away when caught staring, the Hungarians just kept right on staring, as if I were a curiosity on display in the Castle Museum or, perhaps, the Budapest zoo. I tried returning their stares with a pleasant smile, but that just seemed to make their gazes harden, like silent admonitions for daring to draw so much attention to myself and not having the courtesy to instantly make myself vanish.

Any bearded, black-hatted Jew wearing his Judaism on his sleeve was bound to attract attention.

It was 1992, only four years after the iron curtain had come down, and although traditional Judaism hadn't disappeared entirely in Hungary, it wasn't thriving either. The three orthodox synagogues counted barely ten Sabbath observant families among them. In the cavernous Kaszincky shul, founded in 1893, sunlight streamed though cracks in the ceiling on clear Sabbath mornings. On one occasion, my wife found her way up to the women's balcony where the thick layer of dust she discovered convinced her that no woman had preceded her for at least a decade.

The state of Jewish life was hardly surprising. Although the Nazis had occupied Budapest for only six months before the end of the war, they succeeded in exterminating virtually all the Jews outside the capital. The years of Communist rule after the war brought even greater spiritual devastation, with most Jews forced into adopting gentile names and coerced into discarding the last vestiges of a Jewish identity already unraveling after three generations of widespread assimilation.

So any bearded, black-hatted Jew wearing his Judaism on his sleeve was bound to attract attention. One episode in particular stands out.

I was waiting at the trolley stop when a man passed in front of me. I wouldn't have noticed him at all if he hadn't noticed me.

He might have been in his fifties, but the crevices etched into his face would have suited a man nearing a hundred. His flushed and ruddy complexion suggested an intimacy with alcohol; his clothing was soiled and threadbare. With downcast eyes and bleak expression, he shuffled along as if the strain of miserable year after miserable year had wrung every ounce of resilience from his body and every scrap of purpose from his soul.

He glanced in my direction, his gaze briefly met mine, and he stopped. His eyes grew wide as looked me up and down. He raised his hand tentatively and uttered a few incomprehensible words.

I smiled and shook my head, spreading my hands to show that I didn't understand.

Slowly, almost fearfully, he reached out and touched my tzitzit, the fringes hanging from my waist, then brought his hand to his lips. He reached up and touched his fingers to the brim of my hat, then kissed his fingers once again. Again he spoke, and again I shook my head.

By then, a remarkable transformation had come over him. The beaten down expression had disappeared, replaced by a look of astonished exhilaration, as if he had just witnessed the resurrection of the dead.

He raised his hand above his head and shook it as he turned his eyes toward heaven and uttered what could only have been a benediction. He reached toward my face, stopped himself, tenderly touched his fingers to the lapel of my jacket, kissed his fingers one last time and, with a look of wonder and restored hope, shuffled on his way.

I can only imagine what prompted his reaction. Did he recall the days of his youth, before Communism cut him off from the faith of his people? Did he remember the trappings of a sainted grandfather or teacher?

His astonishment was borne from his conviction that, at least in his homeland, people who looked like me were extinct. The discovery that some remnant of his past still survived lifted the weight of misery and hopelessness from his shoulders, if only for a moment.

One man on the street, one minute of nonverbal rapport, left a more poignant impression upon my memory than one whole year in the "Paris of the East."

One man on the street reflected all the despair and all the hopeful triumph of the Jewish people in exile.

One man on the street, who had all but forgotten who he was, not only found his hope reawakened, but reawakened my own hope in return -- that the countless Jews who do not remember, Jews who still don't know who they are, Jews like I was once myself, may one day find their own way back home.

Jump the Barricade: An Inspiring Rosh Hashanah Message
It Takes A Lot Of Faith To Be An Atheist
How Instagram Brought Back This Nostalgic Soup
What Makes Eli Run?
Comments
MOST POPULAR IN Israel
Our privacy policy