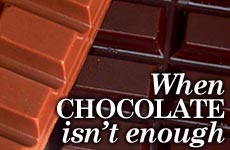 There were times I needed more than eating chocolate to get me through the some of the more difficult moments in raising kids. But then I got in touch with my inner chocolate.

I know it's hard to believe, but I didn't used to like chocolate. Growing up, my friends enjoyed chocolate bars, chocolate cake and fudge ice cream, but to me, it all tasted like pencil shavings.

Then I became pregnant. All of a sudden chocolate was on the top of my list. Every candy bar wrapper that I saw discarded on the crowded Manhattan streets was an invitation -- no a compulsion -- to buy and try. I began to understand the American obsession.

After my daughter was born, the cravings didn't stop. I didn't need a lot, but I needed it regularly.
Chocolate and motherhood, I eventually discovered, are both gifts from God.

When your highly active two-year-old dips his hands into the pickle barrel and starts throwing pickles across the grocery store while you're in the middle of cleaning up one of history's messiest sneezes on your three-year-old's face and shirt, a little chocolate can really help you regain your composure.

When your six-year-old gets off the school bus and asks you if it's true what Malky said about the way babies are made, chocolate can help you formulate the right answer.

As the children grew, I learned that the adage "little children, little problems; big children, big problems" was actually true. From my first grader who felt imprisoned in school to my third grader who became the class clown, enjoying frequent suspensions for distracting his classmates from their lessons and wandering into the construction site adjacent to his school, to my fifth grader who brought home a constant stream of snakes, frogs, and newts -- chocolate was my constant companion.

Then one day it happened. One of my kids did something for which chocolate wasn't going to do the trick. A month into fourth grade I got yet another call from the school. My son was suspended from the bus. I'm not going to go into the details of that particular crime; let's just say the moon rose early that day.

I was beside myself. I had been so relieved to have them all back in school after a difficult summer, and I had just begun a three-day-a-week job. Now I had to make two hour-long trips to get him to and from school everyday. But worse than the driving was the humiliation of what he had done to get kicked off the bus. The sinking feeling in my stomach was so wide that even chocolate couldn't help.

Realizing that I needed something stronger than chocolate to pick me up, I bought a gold bracelet at the sisterhood jewelry sale. But even as the bracelet sparkled on my wrist, I knew that it, too, wasn't strong enough… my desire for my children to just be "normal," and my frustration that they just weren't, was too painful to be patched up by a new possession, even a really nice one. What I really needed was a new perspective.

Somebody once told me that when a Chassid would go to his Rebbe to pour out his heart, the Rebbe would first give him a little shot of something to make a l'chaim. The point of starting the session with a drink isn't about the alcohol -- it's about the blessing that is recited over it.

The blessing made over a drink is "she'hacol ne'heyay bidvaro" - - Blessed are you God, King of the Universe, through Whose word everything comes into being. It's a blessing that reminds us that everything that is happening in our life is only happening because God wills it to be so. Only once the Chassid has affirmed this reality can he begin recounting his woes.

Chocolate, it turns out, requires the same blessing as vodka. Instead of merely eating it as a comfort food, I learned to combine its soothing powers with an attitude adjustment. Now, when I say the blessing, I try to think to myself, "everything that is going on right now is because God wants it to be this way; I accept God's will."

This thought has definitely helped me endure many difficult moments, but I was still frustrated that my children weren't perfect. I mean really, was that too much to ask for? Apparently so, because God just wasn't willing it to be that way. I wanted something more to help me accept that my difficulties with my children were the best thing for me.

Then I began to learn about the blessing that I say after eating chocolate -- "boray nefashot rabot v'chesronon…" Blessed are You God… Who creates many life forms with their deficiencies, for everything that You created with which to sustain the life of every being."

Since the same blessing is said after most drinks, fruits and vegetables, candies and various other non-flour based foods, it is a blessing that I say many times a day.

I was amazed. Here I was, wanting everything to be perfect, and at the same time, actually thanking God on a regular basis for making me, my children and everyone around me imperfect! "Blessed are You… Who creates many life forms with their deficiencies."

"Who we are is God's gift to us; what we make of ourselves is our gift to God."

When God said, "Let Us make man" (Gen. 1:26), He was addressing human kind. He was in effect issuing us an invitation saying, "Let's be partners in creation; I'll start the process, and you complete it. I'll form the raw material of humans and you direct it." Or, in the words of one of my favorite sayings, "Who we are is God's gift to us; what we make of ourselves is our gift to God."

If we were made complete, we wouldn't be able to partner with God in our own creation; we would be like animals or like angels, without the power of free will to make moral choices.

The blessing Jews say after eating chocolate and other non-flour foods is a reminder that though we're sated and thankful, we are still incomplete, and thankful to be so. As I worked on absorbing that message, I tried to be thankful for my faults and for the opportunities they provided me.

I now have a house full of teens, and believe me, chocolate and I are still good friends. But for those times when chocolate just isn't enough, I fortify myself by seeking chocolate 's inner gift, the deeper meanings of its two blessings. I'm not always successful, but it sure works better than a gold bracelet!

Principles of the Soul: #8 - Your Soul and Your Soulmate

The Man who Joined the Search Party Looking for Himself
Megillah Gorilla Saves the Day
Challah Reuben “Grinder”
Big OnThe Little Things
Comments
MOST POPULAR IN Spirituality
Our privacy policy
Aish.com Is Looking for Great Writers