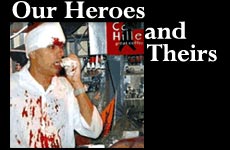 Last night's terror struck close to home. The boom of the blast at Cafe Hillel on Emek Refaim shook the windows of our house and left no doubt that we were hit again -- this time in our own neighborhood.

Our son, Yossi, was on the phone with his brother, Momo, asking when he would be back so they could watch another episode on DVD of "24," the addictive U.S. series about terrorism.

Momo was crossing Emek Refaim, which is two blocks from our house, and they
both heard the blast. Momo, 16, is a trained paramedic with Magen David
Adom. He took out his plastic gloves, which he keeps in his school backpack, and
ran to the cafe to help the injured. Yossi ran out the door with my wife Jane to get Momo.

Momo was one of the first to arrive at the scene. As he described it later,
it was a scene straight out of Dante or Eli Wiesel. Victims were screaming
and strewn about. A group of bystanders was attempting to put out a fire
that was consuming a man. Amputated legs and arms were lying in pools of
blood. A man's head was in the middle of the street.

Momo acted according to the training he received this summer, in a course
designed to teach him how to handle these kinds of events. As soon as the
lead ambulance arrived he was told who to evacuate and helped carry the
injured on stretchers. Within ten minutes it was over, and the amazing
Israeli emergency medical teams had again acted with alacrity and
professionalism. His mother and brother found him covered with victims' blood
and walked him home.

I was in the office when the blast hit and was frantic with worry because I
could not find anyone by phone. Finally I got a call from my son, Yossi,
telling me that our family was okay and that we would meet at home.

Getting home and seeing your son's clothes splattered with blood of a terror
attack is a parental experience I will not forget.

Getting home and seeing your son's clothes splattered with blood of a terror
attack is a parental experience I will not forget -- the relief of seeing him
unhurt, mixed together with the pain, outrage and grief of an attack so
close to home.

After Momo showered, we together watched on TV the surreal scenes of our beautiful neighborhood hit, hurt and bleeding. Momo was curled up with his dog, Lucy, hugging her and trying to regain some semblance of normalcy. A sixteen-year-old boy, having done his heroic work and having seen scenes that one should never see, trying to return to what's left of his adolescence.

We watched the scenes of jubilation in Gaza, with thousands of Palestinians
taking to the streets in spontaneous celebration, delirious with joy at the
"quality" attacks. Sheikh Ahmed Yassin and others praised the "bravery" of
the suicide bombers and shouted their satisfaction. He in particular mentioned the "great" Abu Shnab, the "engineer" of dozens of Israeli deaths whose death was now avenged.

I was struck by the contrast between the two societies. Our heroes were out
on Emek Refaim fighting to save lives, to practice emergency medicine, to
reduce casualties. Their heroes were sowing death and destruction; their
engineering was the science of terror.

This morning as the bright Jerusalem sun came up again over our
neighborhood, most of the outward signs of destruction had been washed away
and cleaned up. Despite the continued terror alerts and torrent of news
about yesterday's attacks, the children need to go to school, to get on with
our lives. But the news contained more bitter tidings that literally took my breath
away. Among the dead in last night's blast were Dr. David Appelbaum and his
20-year-old daughter, Nava.

Nava was due to be married tonight in a joyous wedding of 500 guests. David was a doctor of emergency medicine who was a fixture in Jerusalem's medical scene, having treated hundreds of terror victims as the head of the emergency department in Shaarei Zedek Hospital. He was the founder of Terem, Jerusalem's 24-hour private emergency medical clinic, and my best friend's partner. He was a learned man, a kind man, a tzaddik -- a righteous person. He was a true hero of Jerusalem.

I am letting Momo sleep in this morning. I tried to wake him but he said
he needed some more sleep. His teacher from school just called to say that
he heard from Momo's friends that he had a "tough night" and was among the
first on the terror scene. He suggested that after we attend this morning's
funeral for Dr. Appelbaum and his daughter that I take him to school, so he
could be with his friends and talk out what has happened. My son and his
friends -- true heroes of Jerusalem.

Jonathan Medved is a venture capitalist and the CEO of Vringo. He lives with his wife and children in Jerusalem.

Is Patrick a Jewish Name?

The Murder of Baruch Cohen

The Most Culturally Significant Jewish Moments of 2021
The Softball Player
How This 6 Generation Bread Baker Brought Back Israel’s Ancient Grains
Olivia Newton John’s Grandfather was a Nobel-Prize Winning Jewish Physicist
Comments
MOST POPULAR IN Israel
Our privacy policy
Aish.com Is Looking for Great Writers