Did You Hear the Bomb Last Night? 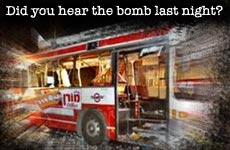 We can still hear the echoes of last night's bomb that killed 20 innocent people.

I had just ended a conversation with a colleague in Los Angeles when I heard the unmistakable explosion. It was without a doubt a huge bomb, and it was close by.

I live in the neighborhood Arzei Habira, approximately 100 meters from where the attack took place.

It was a suicide bomber in the midst of a jam-packed #2 bus taking mostly families back from prayers at the Western Wall, a popular pastime during summer vacation. It's the bus I take home every night from my work at Aish HaTorah which is located in Old City's Jewish Quarter.

After insuring that all my kids were home safe, I ran out to the site of the attack.

You do not want to go to the site of a terrorist attack if you don't have to.

Two years ago I was forced to look for my 14-year-old son amongst the victims of a deadly attack in Beit Yisrael, a neighborhood that is right next to where last night's bombing took place. It was Saturday night and my son went to pray at a shul on the street that was bombed. He wasn't home yet.

I will never forget the sight of a paramedic approaching a three-year-old boy blown 50 feet by the impact of the blast and then turning away to help others after he realized the boy was dead. That scene put me into shock. I later found my son who was, thank God, fine.

I did not want to go to a similar scene unless it was necessary, but on the other hand, you can't be on the doorstep of a deadly terrorist attack and not go to see if your help is needed.

Although I was there within two minutes of the blast, there were already many emergency and police personnel on the scene.

Although I was there within two minutes of the blast, there were already many emergency and police personnel on the scene. I blessed their dedication and decided the best thing I could do was step back and get out of their way.

Standing there absorbing the scene, I felt so helpless. I could not help those suffering immediately in front of me, and I could not think of a way to stop the insane path of the Road Map. America goes to war against terror and then pressures Israel to make a deal with Mahmoud Abbas who repeatedly states that he has no intention of dismantling the terror groups responsible for the murder and maiming of thousands of innocent people -- and scores of children in last night's attack.

When Joshua came to conquer the land of Israel, he sent two spies who ended up being hidden and protected by Rachav, a prostitute.

Our sages teach us that Rachav heard about God's miraculous redemption of the Jewish people in Egypt and His splitting of the Red Sea. She heard the meaning of these two events, integrating the reality that the God of the Jewish people exists and that He is the one and only God to whom we should give our allegiance.

Rachav made that decision upon hearing of those events when they first occurred, but trapped in the depravity of Jericho, she was unable to fully act upon her decision until 40 years later when God brought the Jewish people into the land. The two spies sent by Joshua came to her house and made a pact to save her and her family. In the end, her family was saved and she married Joshua. All of this was orchestrated by God because of the decision she had made 40 years earlier.

Rachav shows us that decisions create realities, but sometimes they take time to come to fruition. She heard the underlying message of events and made her commitment.

It's easy to feel that the situation is hopeless and give up. Rachav shows us that we always have the power to make decisions and the Almighty will move mountains in order to bring our decisions to fruition.

We can still hear the echoes of last night's bomb that killed 20 innocent people. Listen to its message and make a decision to be different. The story of Rachav teaches us that our genuine commitment will make a difference.

The Talmud lists a number of calamities that will befall the Jewish people in the period leading up to the Messianic era. It ends with statement that we have no one to rely on except our Father in Heaven.

The Brisker Rav explains that many people mistakenly believe that this concluding statement is the antidote to the calamities listed -- there is no one to rely on except our Father in Heaven. He points out that this is actually part of the same list and is, in fact, the culmination of the calamities, not their antidote. One of the greatest tragedies is for the Jewish people when beset with crises to respond by saying, "All you have to is rely on God." Yes, we need to rely on the Almighty, but we also need to hear the message and undertake, at the very least, the decision to change.

I heard the bomb last night.

I just hope I truly heard it.

Originally from Toronto, Eric received rabbinic ordination from Aish HaTorah and the Chief Rabbi of Jerusalem. From 1996 to 2014 he served as CEO, working closely with Rabbi Noah Weinberg zt"l to develop strategy and manpower for Aish International and the Jerusalem Yeshiva. He was formerly the North American director of the Discovery Seminars, and compiled Aish's kiruv primer, The Eye of a Needle.

Death of a Hero

The Blessing of a Broken Heart

I'm a Survivor
In the Shadow of David and Goliath
Where Do the Laws of Nature Come From?
Saadiah Gaon, Rashi and Maimonides: How Three Rabbis Revolutionized Judaism
Comments