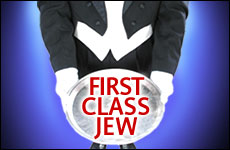 Suddenly my flight was upgraded, and I began to view the world differently.

I was recently bumped up to first class on an overseas flight to Israel. El Al had oversold the coach section, and I was one of the fortunate few to be given complimentary seats upstairs. I am not certain that it is worth the extra thousand dollars normally charged for this pleasure, but I must admit that I loved it. The ambience was luxurious, the service gracious, the seat wide and comfortable. But something strange happened to me when I entered that first class compartment.

I confess that before very long I sensed within me the beginnings of an attitude towards those unfortunates in coach that was quite unbecoming: a blend of pride, hauteur, and what can only be described as something akin to condescension towards those huddled masses yearning to breathe free.

In the time it takes to climb nine steps I had forgotten my origins.

It was at first a deliciously wicked feeling, but soon enough I was troubled by it. Parvenu that you are, I scolded myself. Shameless arriviste. One short flight of stairs on a plane have you climbed, and look to what level you have sunk. By what alchemy have you suddenly been transmogrified into an aristocrat, and they into riffraff? Had it not been for the sheer accident of your being at the right point in the line, you too would be down there rubbing shoulders with screaming children, irritated parents, and harassed flight attendants. Countless times have you preached about the sin of forgetting our origins, and how the Torah constantly reminds us to remember where we came from. But in the time it takes to climb nine short steps you have forgotten your origins.

But as quickly as the twinges of guilt settled upon me, just as quickly did they dissipate. Pampered by the luxury, I let myself melt into the hedonistic ambience of eat, drink and be merry for tomorrow we arrive in Israel.

Now and then I wondered about the great unwashed who were sitting downstairs. Was it noisy there, were the tourists already standing and chatting loudly in the aisles, had the attendants by now become impatient, had the saran-wrapped meals and the plastic cutlery been served, were the aisles already impassable and the rest rooms all occupied?

Thus enclosed in a cocoon of self-satisfaction, I dozed off in my soft leather chair. It had enough leg room and tilted back deeply enough for me to fall into the semi-somnolent airline state that resembles actual sleep.

And then I dreamed a dream. In the dream an old question was posed to me: If a tree falls in a forest, does it make a sound? Without hesitation, I answered firmly: Yes. A sound is a sound independent of its listeners. The existence of a sound is not dependent on who hears it.

A second question was posed to me: If you are in the first class compartment of a plane, and there are no passengers at all in the coach section, are you still in first class?

If there is no second class, there can be no first class.

Now this was a more complex question. If there is no second class, there can be no first class. First class-ness itself depends on second class-ness. So if no one at all is in the coach section, by what definition is my section first class?

And yet, the same level of luxury obtains in first class whether or not there are people sitting in coach. Like the tree that falls in the forest, first class-ness is its own entity: it is a state unto itself, independent of any thing else, unrelated to other sections.

Or is it? One of the items the airlines sell with their first class tickets is the unsavory little pleasure of knowing that there are passengers on the same plane who are not in first class -- who are sitting in a separate, curtained-off compartment behind you or beneath you in a place euphemistically called "coach," in a section more crowded that yours, in seats narrower than yours, receiving service less frequent than you, attended by stewardesses more harried than yours, eating on table trays not covered by linen tablecloths like yours, and -- if you don't observe kashrut -- eating food that is much less varied than yours.

So bemused, I spent the next few hours in semi-sleep. Soon enough the questions dissolved in the steady hum of the engines, the quiet in the compartment, the whispering attendants, the dim lights, the thick blankets, the oversized pillows. Coach class, first class -- why all this Talmudic hair-splitting? I was, for a change, having a comfortable trip to Israel, period.

The sun came up, and with it, breakfast. Entree, juice, eggs, warm bagels, lox, cream cheese, cereal, coffee, Danish, chocolate, milk -- an endless array of goodies. I stretched, yawned, washed, davened, and sat down to enjoy the feast.

But the night-time question hung in the air. In the dawn's early light it occurred to me that a truly pious Jew would not have had a difficult time answering it. Says the Talmud, "Do not look down at anyone." And Nachmanides in his famous letter warns about humility and the evils of haughtiness and pride:

"... Humility is the finest quality among all the fine qualities Know, my son, that he whose heart is arrogant toward other beings is in fact a rebel against God's kingdom, for he is utilizing God's garments to glorify himself -- for it is written (Psalms 93:1): "God reigns, he is robed in pride...."

Nachmanides goes on to demonstrate that in whatever man would be proud -- be it his wealth, his glory, his wisdom -- he is foolish and sinful, for all these things are God's alone.

Beyond this, the Torah itself (Deut. 17:20) warns a king not to multiply chariots or sessions "so that his heart not be lifted up among his brethren." A king -- who has authority and majesty -- is warned against the pride which is his due; how much more so ordinary people.

Only two more luxurious hours remained before landing, and I would not allow vexing reveries to disturb my tranquility. Not for me these trivial exercises in pettiness. Thus purified and cleansed, I awaited our arrival in the Holy Land.

And yet.... what if no one was in fact down there in coach?

I was only curious. It had nothing to do with my being upstairs; I was simply wondering. Could there be such a thing as a coach compartment without any passengers at all? An entirely empty coach cabin: that would be something to see. Just theoretically, of course.

I don't recall exactly what happened next -- was I dreaming again or not? -- but I found myself arising from my chair, walking to the cabin exit, and descending the circular stairwell. Nine steps. Once on the lower level I turned towards the back of the plane, parted the curtain and peered inside. Before me were unruly children, impatient flight attendants, a long line before the restrooms, papers and refuse on the floor, mothers diapering babies, 200 passengers pressed closely together.

I slid back the curtain, climbed back up the stairwell, entered the first class compartment, and sank into my seat. The compartment was tranquil, and the attendant plied me with more Danish and asked me how I would like my coffee.

But my mind was elsewhere. Dream or not, I knew that Nachmanides would never have experienced the tiny surge of reassurance that coursed through me as I beheld the multitude overflowing the coach sections.

It was then that I became aware of four unvarnished facts of life:

1. For ordinary people who have not attained Nachmanides' heights, first class does require a second class.

2. The "lifted heart" warning of the Torah is directed not only to a king who is tempted daily by pride, but is directed at every human being; for anything -- even a seat that is three inches wider with leg room four inches longer -- can generate an attitude of "lifted heart."

from The Shul Without a Clock (Feldheim.com)

The Last Jews of Kolkata

Poland and the Jews
Don’t Believe in Other Gods Versus God is One
Seeing Without Eyes
Why Shouldn’t We Eat Whatever We Want?
Comments
MOST POPULAR IN Israel
Our privacy policy
Aish.com Is Looking for Great Writers