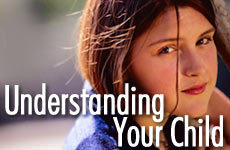 Good parents, help their children develop a roadmap to their own personalities. To do that, you've got to really know your child.

Jacob was the only Patriarch whose children -- all of them -- carried on his spiritual legacy. He had problems with some of his children, but these were isolated incidents. How did he do it?

The Torah gives us a glimpse of Jacob's parenting techniques in Genesis, chapter 47. On his deathbed, Jacob gathers his children around him to give them blessings. This is the Torah's equivalent of the "talk." The way he relates to them provides excellent insight into why he was a successful father.

SHOW THAT YOU KNOW THEM

The first thing Jacob does is to speak to each of his children individually; he tells each something distinctive about him.

This establishes a special connection. If you want someone to respect and listen to you, you have to first show her that you understand her. By singling out each child and noting something special, Jacob shows that he knows and understands him and that he cares about him.

Jacob didn't lay in his deathbed and wing it. It's best for parents to put forth time and effort to get to know and understand their children, to observe their habits and tendencies.

It's worthwhile. The payoff is the intimate knowledge of who your child is, which lays the foundation for the guidance you offer them.

Jacob didn't lay in his deathbed and wing it. He put the time in.

TREAT ACCORDING TO NATURE

Jacob may have learned this lesson from his own childhood. The Torah describes the young Jacob as a "simple man, dwelling in his tents," whereas his brother Esau is called a "cunning hunter, a man of the field." (Genesis 25:27.)

Their innate natures were vastly different -- and yet they were given the same education and treated the same.

Therein lies the problem, argues the famous Torah scholar Rabbi Samson Raphael Hirsch. He avers that the very reason Esau went so far afield is that the two boys were treated the same.

Jacob and Esau were as different as night and day. Their education and the way their parents related to them also needed to be different.

Parenting isn't a one-size-fits-all endeavor. If you try to do that, something is likely to go wrong. In this case, either Jacob is going to turn sour or Esau will.

Jacob understood this and avoided doing it with his own children.

Successful parents tailor their actions and expectations to each child, in keeping with Proverb's famous instruction to "train the youth according to his way so that even when he gets old, he won't turn away from it."

Jacob singles out three of his sons for criticism, but he offers reproach in a very specific way. He doesn't criticize specific actions, but rather singles out the personality traits that led the kid to act inappropriately.

He doesn't rebuke what they did, but rather focuses on the character trait that got them to do it.

Bad actions themselves may or may not be so bad. Jacob is concerned primarily with why they happen. If a trait that causes bad choices is left alone, rest assured that improper choices will happen again.

In two of the cases, he is rebuking his sons Shimon and Levi for sacking an entire city in retribution for an attack on their sister.

Ultimately, Jacob doesn't disapprove of their actions – perhaps he actually thought that they did the right thing. He is concerned, however, that they acted out of anger. Even though they ultimately may have done the right thing, he still takes the time to make them realize that the right action came from the wrong place.

When faced with bad behavior, parents have to unravel the real problem by exposing the character flaw that caused it to happen in the first place. Jacob can do that because he really knows his kids.

Two guys were once caught passing counterfeit money. A wise judge sentenced one to five years in the clink, while she gave the other twenty years.

Why? The wise judge saw that the second guy had the printing press!

Good character traits need to be translated into action in positive ways. Tendencies to kindliness or generosity are rich resources, but they must be harnessed to be anything more than theoretical good.

Be careful, however, not to link the child's intrinsic good to what he does, for then the child may feel pressured to constantly reaffirm his goodness by having to act good. Such kids can eventually wear themselves down.

The Jewish view runs contrary to some modern psychological theories. Jacob acts on the assumption that some of the traits his children have are inborn. They're not going to be eliminated, but they can be channeled properly.

TEACH YOUR KIDS TO DRIVE THEIR CHARACTER

Personality traits have two sides: a positive channel and a negative channel. For instance, not letting things get you angry is a wonderful quality, but an evil person isn't bothered by evil.

It's the same tendency, but harnessed in different ways.

A good parent helps his or her children understand their primary character traits and tendencies along with the strengths and challenges each presents. That self-understanding is enough to last a lifetime.

What Ever Happened to Respecting Our Elders?

Purim and Our Children’s Super Powers

Short Bedtime Coloring Story: Forgetful Fanny
Can You Show Me This "God?"
How to Become Immortal
Judaism and Mental Health
Comments
MOST POPULAR IN Family
Our privacy policy
Aish.com Is Looking for Great Writers