Bigotry and the Road Map 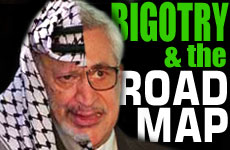 Peace will only come when the world stops "the soft bigotry of low expectations" against the Palestinians.

A hole was torn last week in the international "road map" to
Israeli-Palestinian peace when Mahmoud Abbas insisted that Yasser Arafat remains the unchallenged ruler of the Palestinian Authority.

"Arafat is at the top," Abbas, the PA's prime minister, told Egypt's al-Mussawar weekly, according to Reuters. "He's the man to whom we refer, regardless of the American or Israeli view of him. . . . We do not do anything without his approval."

Abbas's words should have ignited a firestorm. After all, a prerequisite of US support for the road map, spelled out clearly by President Bush last June, was an overhaul of Palestinian civil society, beginning with "new leaders, not compromised by terror" and committed to building "a practicing democracy, based on tolerance and liberty." Abbas, an Arafat henchman of 40 years' standing, was scarcely such a leader. Nonetheless, the White House hailed his appointment as a harbinger of Palestinian democracy -- and as proof that its policy of freezing Arafat out was having the desired effect.

But now Abbas has made it clear that Arafat, far from frozen out, is as
alone
controls Palestinian negotiations with Israel. The Palestinians are no
nearer to democracy today than they were a year ago -- and never will be
so long as Arafat retains his grip on power.

If Bush truly believed that Abbas was the key to a democratic, tolerant,
and Arafat-free Palestinian Authority, he ought to be fuming now. If he
didn't believe it, or if he didn't really mean what he said about
Palestinian democracy being essential to peace with Israel, the media
should be lambasting him for having pretended otherwise. Either way, it
should be clear to all that the road map, which is predicated on
top-to-bottom Palestinian reform, is already at a dead end.

And yet the road map isn't being written off as a nonstarter. The absence
of Palestinian democracy -- the lack of even the first stirrings of a
democratic awakening -- is getting little if any press attention. No
spotlight is being trained on the long list of measures the Palestinians
are expected to undertake in the road map's first phase -- from drafting a
democratic constitution to naming an independent election commission to
holding "free, open, and fair elections."

It is as if nobody really believes the Palestinian Authority will become
"a practicing democracy, based on tolerance and liberty," so why waste
time and breath talking about it?

And what is that attitude if not a kind of bigotry?

Let us be honest. How many Western journalists or politicians or
diplomats could care less whether or not Palestinian society becomes a
democracy? How many of them really think Palestinians are capable of
replacing Arafat's corrupt and brutal despotism with enlightened
self-rule? How many lose any sleep when Palestinians are deprived of
political liberties and civil rights -- not by Israelis but by their
fellow Arabs?

In another context, Bush has spoken of "the soft bigotry of low
expectations." Isn't that a fair description of his own administration's
attitude toward the Palestinians? True, his remarks last summer
conditioned peace on democracy and tolerance. But has he done anything to
make it clear that he meant it -- really meant it, the way he meant it
when he said the Iraqi people would be liberated from Saddam Hussein's
Baathist tyranny?

Bush was quick to embrace Abbas, a man with a long record of supporting
terror and few credentials as a democrat. He has several times spoken of
his "vision" of a sovereign Palestinian state alongside Israel. But where
are Bush's strong words emphasizing that tolerance and democracy must come
first? Where is his embrace of the few brave and beleaguered Palestinians
who dare to openly criticize the corruption and ruthlessness of the
Palestinian Authority? Where is his demand that the PA begin cleansing
its public institutions -- that it stop broadcasting hate videos on its
television stations, for example, and rewrite the schoolbooks that extol
suicide bombers?

Much attention was devoted in recent days to whether Israel would accept
the road map. Israelis, for their part, are focused on how the
Palestinians will fulfill the roadmap's very first proviso -- crushing the
terror groups that have murdered and maimed so many innocents. Both
attitudes are understandable.

But in the long run, nothing is as indispensable to the rooting of peace
than the transformation of Palestinian society into something more decent
than the violent and backward thugocracy it is today. That will not
happen without a lot of interest -- and pressure -- from outside. For
anyone who cares about peace, for anyone who cares about the Palestinians,
nothing in the road map is more important.

8 Reasons Leftists should be Pro-Israel

Why Is Israel Hated So Much?