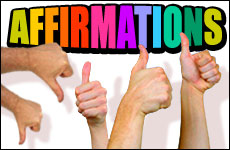 Could it be that uttering some well-chosen mantras can really change your life?

After hearing Saturday Night Live's spoof on 'affirmations' -- "I'm good enough. I'm smart enough. And doggone it, people like me!" -- it was with great scorn that I listened to my friend, many years later, describe the way she practices affirmations in her own life.

Give me a break. She looked to me for approval at this earth-shattering confession, and I was sure that she must have fallen off another planet. Who had ever heard of such nonsense?

"I know, I know," she said, nodding. "You think I'm crazy. Well, I also thought I was crazy -- until it actually worked. In the beginning, I didn't believe a word of what I was saying. But then, slowly but surely, the affirmation began to penetrate."

Today, she can look in the mirror and smile. She feels beautiful, no matter what she weighs or how the world may rate her appearance.

It would have been easy to write her off as an anomaly, but that wasn't the last I heard about affirmations. I began to doubt my doubts. Could it be that uttering some well-chosen mantras can really change your life?

Affirmations are statements that are designed to empower and transform ourselves. Its message is internalized by uttering it repeatedly. The premise is that we all have running dialogues with ourselves -- countless audiotapes that play through our minds at every moment of the day. These "tapes" feed us all the information we need to know -- including some information that we might prefer not to know.

For my friend, her audiotape played like this: "You're ugly, you're fat, you're worthless." Instead of listening to that tape play in her mind for the rest of her life, she stopped it and popped in a different cassette. Now she was feeding the words "I am beautiful" into her internal sound system. Eventually, she began to believe it.

Judaism also believes in affirmations as a recommended self-help method. The great 19th-century scholar, Rabbi Yisrael Salanter was the forerunner of an extremely precise, calculated method of working on one's character. He advocated a form of affirmations -- coupled with chanting and enthusiastic motions -- as a mode of spiritual growth. This effective method, prescribed by many Torah Sages, is a cross between meditation and affirmation.

Modern psychology confirms what our Sages upheld. Cognitive-behavioral therapy has demonstrated that what a person thinks affects the way he/she feels, acts, and reacts. By changing our thought patterns, we can truly change ourselves. Replacing old, negative thoughts with new, positive ones can yield great results. Uttering the new thought pattern is found to be much more effective than simply imagining it in one's mind.

Alas, the evidence was mounting in favor of affirmations. So I tried it.

There were no bolts of lightning, or sudden epiphanies, but there was an undeniably positive result.

Chalk it up to good old hormones, or perhaps it's run-of-the-mill stress, but every so often, I get into a bit of a bad-mood funk. This, I decided, would be the target of my affirmation. The phrase I came up with was this: "Happiness is a choice. I choose to be happy." I repeated the affirmation several times when I was feeling down, and I have to admit -- it helped. The affirmation served to create a pause in my mind, between stimulus and response. It also awakened me to think, process, and internalize -- shaking me out of autopilot. There were no bolts of lightning, or sudden epiphanies, but there was an undeniably positive result.

The power of affirmations is very potent and can be used to work on nearly every deficiency in a person's life, whether it's developing greater self-control or developing a warmer relationship with your mother-in-law.

I'm no expert, but here's the gist of what seems to work:

There's no risk of overdose, no harmful side effects, and it won't make you gain weight. At first, it may feel ridiculous, as I've experienced firsthand. In the beginning, your mind might not believe a word you're saying. But just as soft droplets of water penetrate even the hardest of rocks, well-chosen affirmations have the power to affect the way we think, act, and feel.

The ten days beginning with Rosh Hashana and culminating with Yom Kippur are a really good time to try out affirmations. During this auspicious time, as we strive to make ourselves into the people God wants us to be, why not employ any effective tactic possible? If my friend can make herself feel beautiful, there's a good chance I can conquer some of my character flaws and deficiencies as well.

Keep Your Eye on the Expert
G-d Time
Shavuot is The Holiday of Cheesecake and Blintzes
What Does Kosher Mean Literally?
Comments
MOST POPULAR IN Self-Fulfillment
Our privacy policy