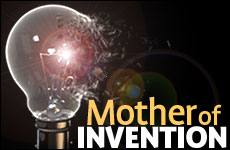 A religious mother of five takes the Consumer Electronics Show by storm.

It's doubtful that Las Vegas bettors would have put any money on an Orthodox Israeli schoolteacher and mother of five taking the city by storm and setting 2005's annual Consumer Electronics Show on its ear. But that's exactly what inventor and super mom Sarah Lipman did, overcoming the odds while casting a whole new light on the way users can interact with their computers, cell phones, and other electronic devices.

She's not alone. Indeed, Lipman, who heads her own company -- Power2B Technology -- represents part of a new generation of religiously observant Israeli women who are finding ways to merge their talents for technology with their strong commitments to family life. Finding that balance is producing a bounty of innovations, while at the same time allowing the women the satisfaction of seeing their child's first step just a few feet away from the computer.

Former Los Angeles elementary school teacher Lipman, 33, says she "fell into high tech backwards," noting that while she's always had a penchant for inventing things, she never saw this one coming. She and her husband Michael were enjoying a vacation in Scotland when she literally saw the light.

The idea came to her in a flash.

Maybe it was the lighthouse she was looking at in the distance, but the idea came to her in a flash. "I was using my Palm, and I thought: 'If this thing could see me coming, it could bring me up what I wanted before I got there. Because I'm giving off all of this body language as I approach it -- anyone watching me can see what I'm doing, but the computer can't.

"If you were watching me use the Palm, you would see that I was heading for the 'contacts' or the address book, or whatever. But the computer doesn't see me coming, so it doesn't give any response ahead of time. But then I started thinking: 'Gee, how could a computer or a Palm or a cell phone see me coming. And I worked it through and I realized I had something. And my husband said: 'Let's patent it,' and we did."

"We discovered that we had actually made a tremendous breakthrough in the entire area of interface and interface design that probably had a lot to do with the fact that I wasn't in the business yet, so I wasn't influenced by the current ways of doing things. I wanted something practical, and because of my background, which is a very strong interest in math and science, the way that I came to it was to think about the way light works and the way light propagates, rather than the way engineers approach it, which is what components can you put together to achieve the effect you want," she told ISRAEL21c.

The technology is based on a stylus which emits invisible light, like a Palm stylus but "really small," she explains. "That light, when it hits the screen, interacts with the display. We've harnessed the propagation of the light and the qualities that it has, and we found that we can interpret out from that where the stylus was when the light hit it."

"Power2Be technology enables three-dimensional interaction with any kind of computer device, and in so doing allows for very, very intuitive interaction at any level, and in any kind of program," Lipman explains.

YOU CAN'T DO THAT

A group of engineers at the Jerusalem College of Technology's Machon Lev institute that Lipman met with on her return to Israel "kind of looked at me and said: 'Well, you can't do that -- there's no hardware that does that.' And I said: 'But just think a minute, that's how it works, it's gotta work like that.' I'm somebody who builds a picture in my mind, and if it works well enough in my mind, then I'm pretty sure it'll work in real life. So they tried it and it did work."

Tests showed that her invention worked, first with a piece of plexiglass, then with an LED, and finally a Palm T-3. The final version which is being completed, is based on a Nokia Smartphone, along with demo software.

So how do you get the word out that you've discovered light, or at least a way of using it that opens new frontiers in the world of interface? Simple, you go to Vegas. "I went with my very good friend -- she's a rebbitzen (wife of a rabbi). She said: 'Sarah, you can't go to Las Vegas alone -- I'm going with you.' So she left her eight kids and I left my five at the time, and off we went."

I come out of nowhere and say: 'I've got this technology.' And they go: 'Wow!'

She was the hottest property at the Consumer Electronics Show. "It was very gratifying, because I don't look the part. I walked around to some of the big players, and they would hear me and all of a sudden their eyes would light up."

Through the buzz generated at the conference, a series of "very big players" whose name she won't reveal, wanted to meet with her. "It turned out that these companies have been thinking about the kind of functionality that our technology provides. And all of a sudden, here I come out of nowhere and say: 'I've got this technology.' And they go: 'Wow,' and I sort of felt like an angel for them when I offered them that."

"I think this trend of women getting more involved in high tech is inevitable...there are many religious women in programming...I think if suddenly we have thousands and thousands of women programming, they're going to understand computers at a much deeper level, and some of them are going to have ideas that take off."

Lipman also believes that the religious training she and other Orthodox women share gives them a different and important outlook on high tech. "It has a lot to do with training and how you think. When you learn to read a verse and read a commentary by Rashi and not let any word get past you that you don't understand...if you're grounded properly, then nothing goes by without a question, and you assume that there's an answer. And that is a very different approach to engineering and invention, which is: Gee -- who says I have to take it for granted that things are this way. Maybe there's another way...it's a different way of thinking, and it's an education which encourages you to think deeply, not to take things at their surface value. So I think that is a profound advantage."

"One of the most important issues I juggle with as a founder/mom is working hours," explains Lipman, a mother of six. "It's important to me to be available to them at important times, like bedtime. I save 'thinking work' for non-kid hours. Typically I work from 8:30 a.m. until 2 p.m., then take calls only, or have meeting in the house, until the kids go to sleep around 8:30. I get back to work at night, usually until around midnight. Working at home has allowed me the freedom to do most of my work at the times best for me and my family."

Lipman admits with a laugh that such a work experience sometimes has her "on the phone thinking: 'It's a good thing they can't see me, because I'm burping a baby while we speak, and in the back the other kids are all being very carefully quiet, and building with Legos or something... we told the kids: Do not answer line 3."

This article originally appeared on www.israel21c.org