Where is My Mind? 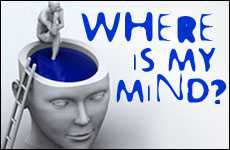 At the dinner table of a family with whom I am very close, I watched the wife serve her husband his dinner and cut up his food into little pieces. He then sat and ate his meal. I just watched, somehow frozen there, wondering, Is that what I just saw? Did my friend cut up her husband's food for him? He doesn't have a broken arm! She has seven kids! What was that all about?

Not one to pry (okay, that's not true, I love prying!) but not one to open up a can of worms, I considered not saying anything. I just watched as my friend served her other kids and my mind wandered.

Finally I just had to ask, and blurted out, "Did you just cut up your husband's food for him?!"

My friend laughed, thanking me for asking. She explained that she had cut up the food for her husband because when she put the plate in front of him, he was holding the baby. Her husband would of course do the same for her during other meals when she held the baby.

Somehow I had conveniently forgotten about that baby! (She had been handed to her eldest sister just a moment before.)

It takes just a second to deem other's behavior as irresponsible, inconsiderate and wrong. But it's also easy to turn around and think the best of them.

I find it incredibly easy to jump to conclusions, and I naturally tend to think the worst of others. It's an easy way out. It takes just a second to deem other's behavior as irresponsible, inconsiderate, foolish and wrong. But it's also easy to turn around and think the best of them. Maybe they had a bad day? Maybe I heard wrong? Maybe I came in at the end of something and have no clue what happened right before?

This is a perfect example the Torah's obligation to be "dan l'kaf zechut," to give the benefit of the doubt. Amazing how quickly I had forgotten about the baby and all I saw was cut-up food. Not only was the baby in this man's hands when he sat down, but even if she wasn't there, I should have assumed that there was a good reason why his wife had cut his food for him.

Instead, my mind immediately started wandering, and I was left thinking all kinds of bizarre thoughts. Giving the benefit of the doubt means that it's my duty to think the best of people, in all situations. And even when I don't get all the logical answers to my questions as to why people do what they do or are the way they are, I still have the responsibility to think the best of others and judge them favorably.

A teacher of mine once spoke about the Ten Commandments and how strange the last one - Do Not Covet - is because it doesn't seem to fit in with the rest. Coveting is not an action; it is a thought process. How can the Ten Commandments order us what to think? Don't steal -- okay. Don't murder -- fine. Those are prohibited actions, and deeds which affect others. But I'm not allowed to think that I'd like to have something that belongs to someone else? How am I to control my thoughts like that?

The teacher pointed out that we always know where our hands are. We keep good track of them, making sure they aren't out there, stealing or murdering. Why are we not as careful to keep track of our minds? Why are our minds out there, left to wander? I know where my hands are. I never lose track of them. But now I often wonder, "Where is my mind?"

In the story of Adam and Eve, after they commit the sin of eating the fruit from the tree of knowledge, God comes to Adam and asks, "Where are you?" Now God didn't mean it literally, because He sees and knows everything. He meant, "Where is your mind? What were you thinking?" And as human beings, we often tend to "lose our minds".

When I ask myself, "Where is my mind?" I am able to keep track of my thoughts, which essentially make my world what it is. I keep track of what I am focused on and what I allow to occupy my brain space. And by applying the rule of judging everyone favorably and not jumping to conclusions, I am able to think the best of others and not assume all kinds of things about them that I might have thought.

By knowing where my mind is, I know where I am. And I choose to be in a place full of love, acceptance and understanding. If my friend wants to cut up her husband's food for him, good for her! I hope to have such a special relationship with my own husband someday.

I’m Such a Jerk