The Jew in the Boardroom 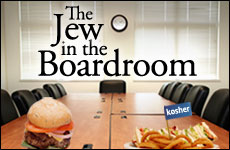 Being Jewish in a non-Jewish workplace.

Being Jewish in a non-Jewish workplace can sometimes be challenging. In the winter season, offices are often replete with holiday parties, tree decorating contests and secret Santa gift exchanges. In spring, our colleagues and their children are hunting for chocolate eggs, while our kids, if they're lucky, are hunting for chocolate covered matzah. In fall, our friends are dressing up their kids and eating their trick-or-treat goodies while we, on our holy fast day of Yom Kippur, aren't eating anything.

We Jews have become accustomed to saying, "We don't do that. Our family is different -- we're Jewish."

I've had to say that on many occasions. My first time happened at the office where I currently work. On my first day, my new boss wanted to have a "get to know you lunch" with the entire department. I told her that I'd be more than happy to participate, but since I was an observant Jew and could only eat kosher food, I would have to sit out on the lunch and just take part in the "get to know you" portion of the afternoon.

"We'll have our lunch catered by a kosher establishment," she graciously offered.

Will my new coworkers think that I'm some kind of germaphobic Howard Hughesian freak?

I entered the boardroom and was impressed by the elaborate spread -- no shmaltz herring and kugel here, only gourmet salads and sandwiches. The food looked great and I wanted to dive in immediately. The only problem was that I was "different." Observant Jews ritually wash their hands before they eat bread. Where am I going to wash my hands? Will my new coworkers think that I'm some kind of germaphobic Howard Hughesian freak?

I started searching for solutions. I began diagramming plays in my head like I was NBA coach Phil Jackson. What if I did the pick and role? I could use a coworker as a pick/obstacle, wash my hands without anyone seeing, and then roll straight towards the table for a sandwich slam dunk...

But even if I did manage to Michael Jordan my way over to the food tray, there was another complication: reciting grace after meals (Birkat Hamazon) once I finish eating my sandwich. How can I do this inconspicuously? Do I really want my new coworkers saying, "That Richard fellow is nice enough, but not only did he use me for a pick and roll, he started mumbling to himself after we finished lunch. And he's a germaphobe. Make sure to keep him away from the children."

I decided to skip the sandwich and have a healthy portion of salad instead. Although any food, including salad, requires a pre and post blessing of thanks, those blessings are much shorter and can be said in a far more subtle manner.

As I heaped the salad onto my plate my boss asked why I wasn't taking any of the sandwiches. After all, they had gone to such great lengths to get kosher food for me, they wanted to see me eat everything.

In an ill advised indiscretion I responded, "I don't really eat bread. I am on the Atkins diet." I'm sure Dr. Atkins was rolling in his low carbohydrate grave at the thought that I was ever on his diet.

Grazing only on salad for the past hour and a half, I was starving. As we left the boardroom, I surreptitiously snatched a sandwich to eat later. I got back to my desk, performed the ritual washing and blessing and took a big bite into that gourmet sandwich that I had been eyeing since noon.

Just then, my boss walked by. "I thought you were on the Atkin's diet?" she asked with a confused look on her face.

Busted! What was I to do?

The only thing I could -- another indiscretion. "I have terrible will power," I responded.

I know, I know... were all these charades really necessary? Why couldn't I just explain to my coworkers that I was different and therefore, conducted myself differently? They would certainly be respectful.

I wanted to, but I just felt uneasy. After all, it was my first day. In a little while, I told myself, I'll gain some more confidence with my new environment.

And that's exactly what happened. A year later, our department was having another lunch (since we already "knew each other," this one was simply called "lunch"). My considerate boss again had it catered kosher. But this time, I was going to be more confident. I was going to be proud of being different. No more charades.

As we walked into the boardroom, I went straight for the sandwiches. Perhaps overcompensating for the previous year, I piled three of them on my plate. I took out a bottle of water and washed my hands in the ritual fashion. I don't think anyone even noticed.

Lunch was enjoyable and we discussed the year gone by, and some of our goals for the future. As the meal came to an end, people started getting up to leave. I calmly and confidently said to my boss, "Paula, I have to recite a prayer of thanks, so you guys can just go ahead and I'll catch up."

I thought that sounded calm and natural. Okay, I had practiced that line a few times in the shower that morning.

"Oh no," Paula said. "Go ahead, we'll wait." She motioned for everyone to sit down.

NO! This was not the way it was supposed to happen.

"No really, Paula, it takes a few minutes. Why don't you guys just go and I'll catch up."

"Absolutely not," she said resolutely. "We're going to wait for you to finish your prayer."

And just when you think it couldn't get any worse...

"Actually, why don't you recite your prayer out loud? I think it would be very interesting for us."

I began to wonder if this was God's way of punishing me for defaming the memory of Dr. Robert Atkins.

"Paula, I really don't think that's necessary. It's more of a private prayer," I said pleading for mercy.

"You know, I think it would be a good team building experience for the whole department to become more familiar with some of your traditions," she said earnestly.

I looked around and saw the other faces of my coworkers nodding in agreement, egging me on. So, in the boardroom on the 49th floor of our downtown office building, surrounded by my non-Jewish colleagues, I began chanting the Birkat Hamazon -- the grace after meals.

"Baruch Ata Hashem, Elokeinu melech haolam..." My coworkers looked on with glee, while I awkwardly relived my bar mitzvah, this time without the poofy hair and acne.

The Jew who lives in predominantly Christian society can often feel different, especially during holiday seasons. And in a lot of ways, that's good.

Once the shock and horror over my boardroom bar mitzvah experience subsided, I realized that I was actually really fortunate. When my grandfather arrived in this country, along with a whole generation of Jews, he was not allowed to be different. He was warned that if he didn't work on the Sabbath, then he wouldn't be working at all. Today we live in a society that graciously allows -- and even encourages -- diversity.

The Jew who lives in predominantly Christian society can often feel different, especially during holiday seasons. And in a lot of ways, that's good. We should be thankful that our non-Jewish friends and coworkers value those differences -- because those differences are what make us as a people . And that ness reminds us to proudly proclaim, "Our family is different -- we're Jewish."

The Jewish Ethicist: Not All's Fair in War - Part 2

The Jewish Ethicist: Trolls and Ogres

The Jewish Ethicist: Where Credit is Due