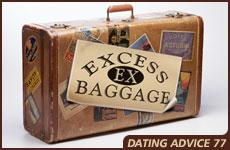 He says he loves her, but he still seems emotionally tied to his ex-wife. Is it worth sticking around?

Last year I started dating a man (a long time friend of mine) who is divorced, and I am having a tough time coping with all the emotional things he is going through.

He swears that he doesn't want to be involved with his ex any longer. But he talks with her constantly and sends her e-mail (and her to him) almost every day. They don't have children, but have recently started some sort of strange "joint custody" thing with their dogs. He gets them on weekends, and she has them during the week. It's starting to disturb me. I was recently at his new house, but I had to leave because she was "coming over to see the place." I spent that whole day crying. When I try to talk to him about the way I feel, he just says, "You're just being jealous, etc." and other hurtful things.

We've gone through a lot, including his decision to stop dating me, just to turn around and change his mind. He has introduced me to his parents, and wants to spend time with mine. It all seems so confusing. He says he is in love with me. But the past is taking over. I don't know what to do.

He started taking anti-depressants, but he doesn't take them regularly and often stops, which sends him into wild mood swings. He has a lot of wonderful qualities. And he is a long-time friend. So I'm not sure if I should leave, or wait until he feels more confident about himself again.

Any advice would be very much appreciated.

You're absolutely correct that this guy hasn't yet adapted to his new situation. In fact, most people need a fair amount of time to deal with the conflicting emotions they experience when their marriage ends. Besides coming to terms with what has happened, they both need to adjust to the many changes in their life and their relationships with others.

Even if they admit that the divorce was their best option, they still must go through the process of mourning (denial, anger, bargaining, depression and acceptance) which can take several months or even a few years. This can be facilitated by supportive friends and/or a therapist, but it can't be rushed.

In an ideal world, newly divorced people would not date until they’ve been able to move through the stages of grief and settle into a new life. Instead, many people, like this man, are so eager to replace what they've lost that they start dating far too soon. Sometimes, an emotionally vulnerable person rebounds into an unhealthy dating situation because they are too hurt or confused to make choices that are best for them. Other people begin to build a new, potentially healthy and enduring path toward marriage, but encounter difficulties because they haven't minimized the baggage from the past. Those difficulties can overpower and sometimes destroy something that had a lot of promise.

We think this man needs more time to adjust to his divorce and to let go of some of the things that still tie him to his former wife. He should be regularly taking the medication that has been prescribed to help with his depression, and he would certainly benefit from the help of a therapist to ease him through this difficult transition in his life.

It would be better for you both to cool down your courtship while he heals. You have a few options in this regard, each with its own set of consequences, so the choice will be yours:

1. You can stop dating and see how each of you feels about each other in several months. By then, one or both of you may not be interested in renewing the courtship, or you may both be willing to try to build what you have into something enduring.

2. You can stop dating, but still be "friends." However, this usually does not work, because it only confuses him further, and it keeps you emotionally tied so that you cannot move forward in your own life.

3. You can continue to see each other on the condition that he regularly takes his medication and goes to therapy. He will certainly appreciate your emotional support and understanding during this difficult time he is going through. As you have wisely been doing, continue to stay out of any ongoing disputes with his former wife. That is something he has to handle on his own. There is no guarantee that this courtship will last if you try this approach, but without his commitment to therapy and medication, we don't think it will succeed.

We hope that whatever path you choose, the two of you get this sorted out and find what you are looking for.

Dating Maze #260 - Warm-up Exercise
Should I Break Up, Get Engaged or Keep Dating?
Time Is Your Precious Commodity
A Constant World in Flux
Comments
MOST POPULAR IN Dating
Our privacy policy