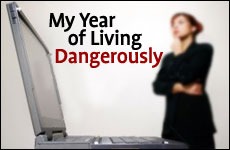 Last year I walked away from my law firm -- the job, the title, and the money -- with no plans whatsoever to find another job.

As an attorney with a prominent firm, I had achieved a certain status and a steadily-increasing income. When someone once commented to me around Rosh Hashana that "the Almighty decides how much money you make," I laughed and responded, "Yeah, but I give him a range!"

But after more than a decade with a single employer, I recognized that I had developed my own strain of the Stockholm Syndrome: I could no longer distinguish between my goals for myself and my firm's professional and financial plan for me.

I feared that if I blinked my eyes, I'd be 65 and retiring from my job without ever making another important decision about what I was doing with my life. I desperately wanted to clear my head, to think creatively about what I'd like to be doing, and maybe even figure out what God wanted me to be doing with all the skills and experience I'd been fortunate enough to acquire.

Prepared to uncover that maximizing my income might not be it, I took the plunge.

Eliminating a full-time professional position from my schedule left me with two huge challenges: time and money. It took a while to figure out just what to do with all the free time. Suddenly, there was so much of it! Morning till evening, stretching out before me with no schedule whatsoever. What an enormous opportunity, and what an enormous responsibility. I found myself in an alternative reality in which I had time to do whatever I chose -- but no idea what that should be.

I decided to begin by doing only those things which used my skills and assets in service of the public good, without any regard to what or whether they paid.

In the year that followed, I served as a temporary judge (unpaid), sat as an arbitrator in attorney-client fee disputes (unpaid), taught English, History, and U.S. Government at a Jewish girls' high school (might as well be unpaid), wrote for this website, and did a dozen other worklike things which challenged and stretched me in new directions.

In leaving my job, I became available for my life.

In addition to professional work, people called me for various things they never would have bothered me with while I was employed: Would I host a friend's 50th birthday party? Another friend's daughter's bridal shower? I spent a week at home with a friend recovering from chemotherapy. I bought every kind of ball imaginable and had friends over while their kids played in the back yard. My 12-year-old nephew came from out of state to visit me for five days, and I spent every moment with him, at the beach, at the movies, buying his Bar Mitzvah suit. I fell in love with cooking again, and eating fresh healthy food. (I never eat breakfast in the car any more!)

In leaving my job, I became available for my life. And life turned out to be rich, and good, varied and interesting.

I had more time than I had expected, because in addition to not working, I no longer needed to "escape" from work stress in what used to be the after-work hours. Computer time dwindled to a very occasional game; my desire to "watch" entertainment almost completely disappeared. Instead, my garage got cleaned out; my wardrobe updated; my body exercised. I prayed more, complained less.

I quickly learned that having more time free also means more time to feel bad about the big things that make me sad -- in my case, still not having found my true life partner. It seems that working full time gave me a "pass" on having to learn to manage my mind, my emotions, my feelings -- they were mostly just on hold for 16 years while I got my "work" done.

BUT HOW DO YOU LIVE?

And then there's money. "But how do you live?" I am asked almost daily. That indeed has been the great mystery. I did no advertising and did not seek gainful employment of any kind. Having cut the umbilical cord of a bimonthly paycheck, I had absolutely no plan for earning money, and didn't plan to have one. I left this area of my life completely up to God -- and I no longer gave him a range. In this regard, my year of no employment was truly a year of living dangerously.

Any paying legal work I did was the result of unsolicited invitations. Some work came to me in an erratic trickle, referrals from people I'd worked with in the past. But rather than doing whatever came my way, I determined to only accept work for which I was ly qualified and in which I was particularly interested. I would only work for people I trusted completely and liked. I placed all of these hurdles between me and an income, and I asked God to give me enough.

Each time the paying work dried up, I would pick a time in the future when I would start worrying. (I'm not at the level where you just never worry about money!) In March, I calculated that in May my finances would need a boost -- so I kept in mind that I would start worrying only by May 4. That gave me nearly two months of an absolutely great time, free of worry and full of living.

I worry less about money now than I did when I had a full-time job -- and I'm making a whole lot less.

On a weeknight in early May, I had dinner at a friend's house (something I absolutely never had the time to do when I had a job), and her husband asked me what was going on with legal work. I told him that I was enjoying some time off but hoping to start working again in a few days. The next day he referred me a substantial case in my area of expertise, which kept me working through November. I felt and expressed my deep gratitude to the Almighty for this referral, and felt privileged to work on it. How different from begrudging the work I did for a paycheck which came whether I worked hard or not!

The details are not important, but the experience has continued. To my great amazement and overwhelming gratitude, the perfect work for me arrives almost precisely when I really need the money, and I feel completely taken care of financially. I worry less about money now than I did when I had a full-time job -- and I'm making a whole lot less. I no longer feel my income rests in the hands of human beings who use arbitrary criteria to determine my worth, or even that my own effort is the determiner of how much I earn.

Since I no longer "give Him a range," what comes in now is closer to the amount that I need. It is a fraction of my former salary, but I find it is enough.

Since I left my job, the riches of a lifetime of friends and colleagues supports me better than my own finances ever did. I'm learning to receive graciously, rather than always being the giver; I'm learning to learn again, after always feeling like the teacher. The power and the confidence of the high wage-earner has been replaced by the humility of a grateful recipient of God's bounty.

I called it my "year of living dangerously," but I've never felt safer.

The Talmudic Formula for Success

The Jewish Ethicist: Demanding a Raise

The Jewish Ethicist: True to Your Word