A War Against What? 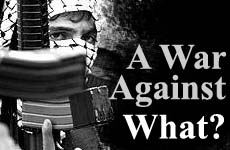 Only when "war on terrorism" becomes "war on militant Islam" can the war actually be won.

Militant Islam keeps on killing, but politicians and journalists still avert their eyes.

One terrible example comes from Pakistan, where a sequence of assaults on Christians, both local and foreign, has taken place over the past year:

* March 17: an attack on the Protestant International Church in Islamabad kills five (including two Americans).

* May 22: an attack on the executive secretary of Karachi Diocese of Church Pakistan, who was tied to a chair and injected with poison.

* Aug. 5: an attack on the Murree Christian School kills six.

* Aug. 9: an attack on the Christian Hospital in Taxila kills four.

* Sept. 25: an attack on the Institute for Peace and Justice, a Christian charity in Karachi, kills seven.

There have also been many more non-lethal assaults on churches and church services, the most recent this past Sunday. There is no doubt about the motives of the perpetrators: Militant Islamic groups brazenly speak their minds, declaring their goal is "to kill Christians" and afterwards bragging of having "killed the nonbelievers."

Victims know full well why they are targeted -- "just for being Christians," as one person put it. A local Christian leader states "that the terrorist attack was an act by al Qaeda or some pro-Taliban organizations."

Pakistani law enforcement also recognizes who engages in this violence and why. "We are investigating whether there is an anti-Christian gang operating in Karachi, made up of jihadis," the city's chief investigator explains.

A provincial police chief comments about the Sept. 25 carnage: "Unlike the usual terrorists, the killers [last week] showed no haste. They took a good 15 minutes in segregating the Christians and making sure that each one of their targets gets the most horrific death."

The murderers separated Christians from Muslims by requiring each hostage to recite a verse from the Koran.

A survivor of that slaughter recounts that the murderers separated Christians from Muslims by requiring each hostage to recite a verse from the Koran. Those who could not were seated at a table in the library, bound to chairs, gagged, and shot in the head (except for one person who was shot in a bathroom).

Politicians and journalists, however, pretend not to recognize the problem.

Pakistan's President Pervez Musharraf reacted to the Sept. 25 butchery with seeming bewilderment: "I could not say who [was behind the killings]. It could be al Qaeda, it could be any sectarian extremists within, or foreign elements of RAW." (RAW is the Research and Analysis Wing, India's intelligence agency.) Pakistan's interior minister likewise emphasizes that RAW's role "cannot be ruled out."

The media is almost as bad: Paul Marshall of Freedom House shows that American and European reporting on these many massacres in Pakistan overlooks the militant Islamic dimension, instead presenting the atrocities as vaguely anti-Western in purpose.

This pattern of reluctance and euphemism in the case of Pakistan fits into a more general context. President Bush declared war not on militant Islam but on a faceless enemy he has variously called "terrorists," "a radical network of terrorists," "terrorists in this world who can't stand the thought of peace," "terrorism with a global reach," "evildoers," "a dangerous group of people," "a bunch of cold-blooded killers," and even "people without a country."

The establishment media has been complicit. With the notable exception of CNN's Lou Dobbs, who talks about "the war against radical Islamists," it unthinkingly echoes the government's line that the conflict has nothing to do with religious motives. It's as though Franklin D. Roosevelt, after Pearl Harbor, declared war on surprise attacks rather than on the Japanese empire.

This evasion has consequences, for an enemy who cannot be named cannot be defeated. Only when "war on terrorism" becomes "war on militant Islam" can the war actually be won.

Fortunately, the president has on occasion hinted at this, as in May when he called the enemy those "defined by their hatreds: they hate . . . Jews and Christians and all Muslims who disagree with them."

It is not a war on terrorism, nor a war on Islam. It is a war on a terroristic version of Islam. Authorities in the United States, Pakistan and elsewhere need to face this unpleasant fact. Not to do so will mean the unnecessary loss of lives.