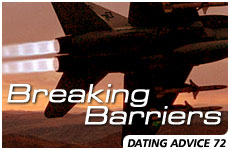 Singles in their 40s have a set of dating challenges. Sometimes the answer is found by looking in the mirror.

I am a 45-year-old SJM. I've never been married, but I was semi-engaged for several years. Before I met her, when I was in my early 30s, I was dating women of different ages -- from teenagers to 30-somethings.

Now that I'm 45, I find that women under 40 aren't interested in a man my age -- ostensibly because men over 40 who have never been married are considered anathema by single women. I've also found that women in their early 40s are either unbelievably picky or not Jewish. And I am not considering women my own age, because I want to get married and have children.

I am in excellent health and physical shape, well educated, fairly wealthy, reasonably good looking, interesting, great with kids, and my family is very well regarded. On dates, I spend all the money and do all the driving.

Why can't I find a reasonably pleasant, nice looking Jewish woman who's young enough to have children and wants to get married? Is there some secret formula that I'm missing?

You've identified a genuine problem that affects single men and women in their 40s and onward. The fact is that singles in this age bracket have more complicated lives than younger people, and it is definitely harder for them to be realistic about the qualities they should be looking for, to open up to someone else, and to overcome accumulated emotional baggage and reach the goal of marriage.

Realistically, however, it isn't easy for these fortunate individuals. They started out like most unmarried men and women in their late 30s and 40s: personable, well-liked by friends, doing well at work, and feeling that most aspects of their lives are great, except for the fact that they are single. For some reason, they missed the mark when it comes to dating, and neither they nor many of their friends were able to understand why. They were too close to the situation to objectively identify what was keeping them from dating successfully.

In our years of experience working with singles, we have come to understand that every unmarried man and woman in their mid-30s and onward is held back by a barrier of some sort, or has recently been able to break through their barrier. This isn't a criticism, and it isn't an attempt to "blame" singles for their personal situations. It's simply a fact of life. We hope that you, and every other single who would like to marry in the near future, try to find out what is hindering your success. Since we don't know you personally, we can't even begin to guess what that is.

Virtually every single in this age bracket is held back by something, and the barriers are as different as the individuals who face them. Those people who have gotten married didn't see their barrier dissolve overnight. The women doesn't just wake up one morning and find dating success, and the "right person" doesn't magically waltz into each guy's life. Yet each of them managed to move beyond his or her personal impediment. How?

In every case, it happened through a combination of an intervening factor, and a concerted personal effort. The intervening factor could have been an epiphany of some sort, the wisdom of a self-help book (Shaya Ostrov's "The Inner Circle" and our own "Talking Tachlis" are two good starting points for older singles, and there are other books on the market as well), the support and guidance of a married friend who serves as a mentor, or the help of a professional therapist. Through this combination, motivated singles have changed their perspectives and found they can clarify what has been holding them back. They have also understood that they must devote time and energy to help themselves move forward through the barrier.

One of the barriers that people often face is the logistic difficulty of finding suitable dating candidates. You've mentioned your own problem with the pool of available women in your area, and we've heard this many times before. In truth, there is a big population of Jewish women in their later 30s and early 40s who truly want to get married. You are in a much more enviable position than they are, because there are many more marriage-minded women in this age bracket than there are marriage-minded men.

You are right that many of these women are still bogged down behind barriers such as unrealistic expectations ("unbelievably picky"), but there are still plenty of great women who have worked out issues that may have previously held them back. You need to look in the right places to find them, and be realistic about the qualities you would like to see in a future wife.

We understand why age is an important factor to you; you would like to become a parent in the near future. But there are no guarantees in any age group. All of us are aware of the statistics, but we also know that some 30-year-old brides will have difficulty conceiving and some 40-year-old newlyweds soon find themselves mothers of two young children. You also need to be realistic about the fact that women who are more than 8 or so years younger than you are not that interested in going out with you.

We'd like to say something else that you and others may want to give some thought. We understand the pain many women experience when their biological clock for bearing children has run out, and how difficult it is for many men to accept the fact that while they are physiologically able to become fathers, they might marry a woman who is able to bear children. What saddens us more is to see this painful reality become a barrier to these individuals' future happiness, because they lose sight of the fact that couples who do not have children also have happy, fulfilling marriages.

You may say that it's easy for us to say this when we have not personally experienced the distress these men and women feel, and that is true, to some extent. However, as professionals who empathize greatly with our friends and clients who face this fact of life, we hope that some of our readers in this situation will benefit from a thought that has helped countless others deal with deeply painful situations: Sometimes, the best thing you can do is to allow yourself to fully mourn your loss, and then begin to move forward. Only after we allow ourselves to grieve for the loss of something very dear to us can we accept our situation and slowly start to build a newly defined life for ourselves.

There are good people out there of all ages. We wish you the best in finding the right one for you.

Dating Advice #9 - On the Rebound

Dating Advice #277 - End of the Rope
Scientific Curiosity and the Divine Encounter
Mind Over Milkshakes
Love the Convert
Comments
MOST POPULAR IN Dating
Our privacy policy
Aish.com Is Looking for Great Writers