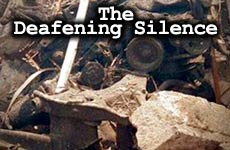 The terror attacks in Kenya foretells troubles for the entire free world.

There's no haven for Jews. Not within Israel and not without. The earth is stained with their blood: From an El Al counter in Los Angeles to a beach resort in Mombasa.

Their children, their elderly, their scholars, their farmers, the diaspora of their tribe -- all targets, at home and abroad. Shopping for food, riding a bus, strolling across a campus, dining as families in restaurants, dancing in clubs, worshipping in synagogues. Not a blessed place in all the world is safe.

I have been waiting for just one word of sympathy, of pity, from the Muslim world. But the silence has been deafening.

The carnage in Kenya last Thursday is only the most recent atrocity but no doubt history will recall it as a defining moment in the modern-day Holocaust of Jews -- a point where all buffers of presumed security were breached, when the war of attrition against Israelis went extra-territorial, crossing geographical borders and moral boundaries. Those shredded bodies of vacationers who believed themselves somehow beyond the reach of homicide bombers are sad testament to the reality of their predicament. And the poor victims who were not Jews, the Kenyan dancers welcoming new arrivals to a holiday hotel, they were but expendable bit-players, the collateral damage of Jew-hating terrorism.

Imagine, if Zionist terrorists armed with shoulder-held rockets had attempted to bring down a Saudi airplane, as unidentified militants had attempted to blast an El Al flight out of the sky over Kenya, simultaneous with the Mombasa bombing -- a two-pronged attack suggesting sophisticated planning and a network of operatives, with the fingerprints of Al Qaeda all over it. The reverse scenario -- Jew on Muslim -- would be grounds for war, for a unified assault on Israel. And the West would be hard-pressed to interdict, to mollify.

Ah, but these are just dead Jews. And we are accustomed to their dying. I have been waiting, in the days since Thursday's abominable attack, for just one word of sympathy, of pity, from the Muslim world. One note of commiseration to emanate from inside the thousands of mosques, one hint of regret and empathy from commentators ever ready to assail any Israeli misstep and aggression. But the silence has been deafening.

Islam, that great religion of peace, has had nothing to say of more murdered Jews. That silent majority that disapproves of extremism, that argues the Muslim faith has been ill-served by militants who've twisted every article of the Islamic faith -- not a murmur of renunciation of those who commit such travesties in their name. Where is the rage?

Only the beleaguered Palestinians themselves, in a poll taken before Thursday's tragic events, have expressed weariness with the whole campaign of violence aimed at Israel, this as one lone voice -- a potential successor to Arafat -- has declared that the intifada must stop because it has done nothing to further the Palestinian cause.

It's impossible to disentangle the war against the Jews from the larger Islamist war against the West. Assuredly, the misery of Palestinians was not what motivated the terrorist agenda of Osama bin Laden and Al Qaeda. Bin Laden, preoccupied with routing America's presence in the Arab world, militarily and culturally, paid only passing lip service to the plight of Palestinians in the occupied territories. At some point, they became a postscript to his anti-Western, anti-American screeds. But others quickly linked the micro-terrorism to the macro-terrorism, as if to invest Al Qaeda and like-minded terrorist networks to a more palatable cause. And in this they've been rather successful, with a rationalizing argument that offers endemic Islamic grievances on the one hand and Israeli truculence on the other. It is a sham of an argument, illogical at its core, but repeat a lie often enough and it will become the lingua franca of terrorism.

Israel, as it has learned from history, cannot depend on any other nation, any other alliance of nations, not even its great and steadfast friend America, to fight its battles, ensure its security or avenge its dead. In the same way Mossad tracked down and eliminated the freed perpetrators of the Munich Massacre in 1972, its counter-terrorist experts will likely, insofar as they are able, track down and eliminate those who committed Thursday's vile attacks. But this is a new generation of global terrorism and Israel's enemies -- like the West's enemies -- no longer stand out in a crowd. In many parts of the world, they are the crowd. Islamist pretenders, fomenting hatred in the masses, have made sure of that. And they are like cockroaches, scurrying out of the geopolitical cracks -- in Saudi Arabia, in Yemen, in East Africa, in the Philippines, in Indonesia, even in America and Canada.

They kill Jews. They kill Americans. They kill Australians who had the temerity to push rampaging Indonesian paramilitaries out of East Timor, a predominantly Catholic fledgling state. They kill Kenyan dancers and civil employees. They kill French engineers. They blow up skyscrapers and bring down airplanes. They do all this with Allah's name on their lips.

And some day, I fear they'll come for you.

This article originally appeared in the Toronto Star (www.thestar.com), where Rosie Dimanno is a columnist.

Conspiracies, Jews, and the Jewish State