The Land of Hope and Dreams 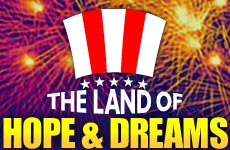 After September 11th, I decided to become an American citizen. Here's why.

After September 11th, President Bush spoke of the war against evil, my daughter stood in line for two hours to buy a flag and I filled out my papers to become an American citizen. While I didn’t have to escape in a small boat through shark-infested waters to get here, it was still a big decision.

Canada is my country of birth; Israel is the land of my heart and my people. Why was I becoming an American citizen? And why now?

I’ve lived here for 19 years. I thought that I wouldn’t mind if I was an American. I would like to vote. But it just wasn’t worth the hassle -- the forms, the photos, the $250!

America shared a crucial experience with Israel -- being attacked for your values and for your very existence.

But something changed after 9/11. I had always appreciated the United States as a moral force in the world -- but not enough that I was actually going to do something about it. Then America shared a crucial experience with Israel -- being attacked for your values and principles, in fact for your very existence. We were allies in the deepest sense.

If I couldn’t be in Israel (and alas I couldn’t for personal and professional reasons), I could still fight the good fight. So I found myself, about two months ago, standing in the L.A. Sports Arena, with 3700 others (we were the second group of that size that day), affirming my commitment to this country and appreciating this country’s commitment to me.

There were 120 countries represented on that day in April -- many fleeing lives of persecution and poverty for the dream of America. For the hope and opportunity. Sometimes if your life has been easy and comfortable, it’s hard to fathom what that really means, what this country does for others.

The United States isn’t perfect. Far from it. No country is. But there is a power to a country founded on freedom, particularly on freedom from religious persecution. There is an acceptance and tolerance that have benefited the Jewish people.

America has been a blessed land, perhaps, as Dennis Prager suggested on his radio show, due to the fulfillment of the Almighty’s commitment to Avraham, "Those who bless you will be blessed." (As we see this promise come to fruition, we are reminded that God will keep the other half and "those that curse you will be cursed.")

We are privileged and grateful to be here. Sometimes it takes a cataclysmic event like 9/11 to focus us on what we have, to appreciate the gift -- in the personal and the larger sense.

Who knew how much love and compassion there was to share?

For me, now an American citizen, this is going to be a different July 4th. And for the country, still struggling with the aftermath of September 11th, trying to cope with ongoing terrorist threats, striving to fulfill its promise to itself, to its citizens and to the world, July 4th isn't going to be the same.

There are heavy battles yet to be fought and complicated decisions to be made. The government keeps warning us there’s a long road ahead. With the Almighty’s help, we know that good will triumph. I’m glad I’ve joined the troops.

So fire up the barbecue, light up the skies and "God bless the U.S.A." (Everybody sing!)

The One-Woman Battle Against Pro-Nazi Bias on Wikipedia
It Takes A Lot Of Faith To Be An Atheist
How Instagram Brought Back This Nostalgic Soup
What Makes Eli Run?
Comments
MOST POPULAR IN Current Issues
Our privacy policy