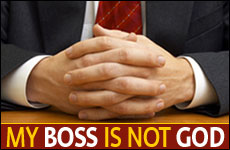 I needed help changing my life. So God got me fired.

I really needed to leave my job. But with three children and an underemployed husband, I just didn't have the guts to simply walk away from my good-paying job as a reporter.

I'd worked at my paper more than six years, but for the final 18 months, under the regime of a new editor, what had been the most rewarding and fun job I'd ever had became instead a drudgework-filled agony.

Still, I was afraid of what would happen to us financially if I left. After adoption costs from our two youngest and the need to put a new roof on the house, we had racked up some debts. And my oldest son's bar mitzvah, and its attendant costs, were looming just a few months off.

So I slogged on. I dreamed of spending more time with my kids, especially my two youngest, special-needs preschoolers just 2 and 4 years old. I also wished I was tackling new challenges as a writer -- maybe doing less-stressful freelance work, or perhaps writing books instead of articles.

On Yom Kippur, I poured out my heart to God. He acted with startling swiftness.

On Yom Kippur, I poured out my heart to God. Show me the way to be with my children, I prayed. Help my husband to find the well-paid work he deserves. Let this be a year when our lives take a turn for the better.

God acted with startling swiftness. Exactly one week after Yom Kippur, on Thursday, my editor fired me.

Sometimes God sees we really need a kick to get headed in the direction our life needs to go. So after nearly seven years, more than 1,000 articles and eight national and regional awards, I was shlumping towards the door, carrying all my personal belongings in a heavy box. Ouch.

But as I reflected on what had happened, I felt a growing sense of serenity. Despite the shock of suddenly being out of a job, on my ferry ride home I found myself smiling wide as looked back over the past few days. I realized that without doubt, God had concocted this plan to jump me over the fears that were holding me back.

In particular, the day before my box-laden exodus from my own personal working-world Egypt, two things happened that shouted out to me that divine help was on the way. Of course, I failed to grasp their meaning until later.

The first: an unexpected challah sighting.

The week I got fired was to be the first week in many years that I was supposed to work outside my home on a Friday. I was filled with anxiety about how I would make Shabbos dinner happen, in particular how I would find time to pick up challah. I work in Seattle but live on an outlying island, so the logistics are difficult.

Then, on Wednesday, I ducked into a natural-foods market I rarely visit to grab a sack lunch to take to a downtown-Seattle lunch-and-learn session with my rabbi. And there, sitting at the very front of the baked goods, were a stack of fragrant, brown-paper-wrapped challahs.

I'd never seen challah in this store before, or from this bakery. It even had kosher certification, unusual for a Seattle grocery store outside of a couple of heavily Jewish neighborhoods. And it was Wednesday! I couldn't recall ever seeing challah put out before Thursday night at a grocery store.

The message was clear: God wanted me to stop worrying immediately about my ability to make Shabbos for my family. It was going to happen.

Of course, as it turned out, that Friday I would be no longer employed, so God was dropping a hint here. I was reassured about Shabbos dinner, but still a little dense about the comprehensive plan God had to solve my job problem.

When you're a reporter, you're constantly bombarded with swag. Companies send food, flowers, coffee beans, invitations to the theater, toys, bottles of wine... you name it. The hope is that I'll be inspired to write something lovely about their company. It almost never works, but the swag keeps on coming.

The last piece of swag I ever received at this job arrived the same day as the challah. It was a t-shirt from Volkswagen, crushed up into the shape of a tiny Beetle-shaped car.

I broke open the package and unfolded the very wrinkly, washed-blue shirt. The front bore just one word: "Goodness."

On the back, just a Web site address was printed. The URL? "Forceofgood.com."

At the time, I thought the shirt was cute, uplifting and would look good on my menschy, soon-to-be-bar-mitzvahed son. The shirt was his size.

I have to laugh now that I failed to pick up on this one. Force of Good? Volkswagen may be using that phrase to promote their newly redesigned Beetle, but through the Jewish eyes of someone with a job crisis, this message can only be viewed as a shout-out from the One who is the Force of Good in the universe. "Don't worry. I am arranging things for your benefit."

If I had any final doubts, a third sign came the day after my firing. I sat down to call all of my best sources. I thought I'd let them know I wasn't at the paper any more, and just say "Hey, thanks for all the help over the years." I thought they'd all say, "Oh -- well good luck, then." If that.

Instead, the response was overwhelming. "I can't envision that paper without you!" one said. One previous editor told me he thought I was the best hire he had ever made in his long career.

And with the praise came a surprise -- job leads. One source knew a local magazine they thought was hiring. "I'm emailing the editor about you now, while we're talking!" she said. At the end of the day, I had a page-long list of followup calls to make on Monday. My fears were put to rest -- another job surely was out there for me, if I wanted one.

At the Torah service the Saturday after my job ended, I stood with tears streaming down my face as the Torah was taken from the ark. I felt so lucky to be a Jew, to have this community and this belief system to remind me that though my job had been suddenly ripped away, all the truly important things remained the same. Two bar mitzvah boys stood on the bima, in the act of becoming Jewish adults, and the great cycle of Jewish life went on, as it has through the ages.

Outside the synagogue, the big community sukkah stood, a reminder of the temporariness of our lives.

My stress came from thinking my job would have to go on forever, no matter how unpleasant it became, when of course God designed the world so that all things change, and have an end. It was wrong to keep suffering at my job when God meant us to enjoy our every moment upon this Earth. It was time to move on, and when I needed help to do that, God was swift to provide it.

When we approached the time to sing one of my favorite opening songs, Ashreinu Mah Tov Helkaynu, I felt a moment of hesitation. Could I sincerely sing "Happy are we! How good is our portion!" now? Spontaneously, I found myself singing with more gusto than ever. How good is my portion, yes, even this week, especially this week. How great is my Jewish inheritance, giving me the tools to recognize God's help and to cope with life's uncertainties.

This horrid boss was not my God, I realized. He had no true power over how my life will turn out.

The Force of Good had swept me up and set my life onto the right path again, and I realized I was finally ready to set out on this unfamiliar path, not afraid, but in joy.

Simcha Schoenherz has been a journalist for more than 15 years. She lives in the Seattle area with her husband and three children ages 2,4, and 12.

The Jewish Ethicist: The Corporation and God

The Jewish Ethicist - Is Googling Ethical?
How I Learned to Love the Multiverse
10 Big Jewish Inventions
A Journey through Jewish Sicily
Comments