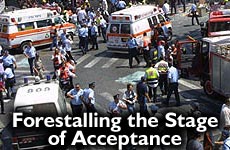 It would be tragic to accept the crisis in Israel as a normal part of reality.

Something is terribly wrong with us. Yes, deep down, we are all worried and grief-stricken over the horrible violence in Israel. Yet, if you look around, we don’t seem terribly shaken upon hearing news of the latest terror killings. We take comfort in knowing that this time, “only four people” were killed. We get a bit more upset when the casualty count is higher, but our lives quickly return to normal.

As I write these words, Israel is reeling from another heinous attack that killed three soldiers. Strangely, here in America, I didn’t hear anyone talking about this tragedy. No one seemed outwardly moved or deeply saddened. This was apparently viewed as “just another attack.”

How could it be? How could it be that over 700 Jews have been killed by Arabs, and we are not moved to cry, to pray better, to finally hear the call for repentance?

The answer is quite simple and quite frightening. We are resilient to a fault. We can get used to virtually anything. We are very much like the boiling lobsters.

Like the lobster, we have become so used to Jews getting murdered in Israel that we hardly blink anymore.

The most efficient way to kill lobsters is to take live lobsters and drop them into cool water, and then slowly increase the temperature of the water until it reaches boiling point. This way the lobster doesn't notice the water becoming hotter until it's too late. Had the lobster been placed initially in boiling water, it would have fought with all its might to jump out.

Like the lobster, we have become so used to Jews getting murdered in Israel that we hardly blink anymore.

We all remember Rosh Hashana 2000, when the violence had just begun and how scared we were. The heightened awareness in our prayers was easily perceptible. Who doesn’t recall the fright we all felt when the soldiers were lynched in Ramallah? Each shooting attack on Gilo made us shudder. Remember the summer of 2001 when so many lectures and events were dedicated to the memory of “73 Jews murdered”? And now, we have close to 10 times more!

The question is: Did we pray with more feeling then, at the beginning of this horrible ordeal, or now, after 15,000 terror attacks? It seems that so many of us have reached a stage of acceptance, which has largely removed any sense of mourning, grief, and emotion.

FREE WILL USED FOR EVIL

Many of us are familiar with the “four stages of grief” which psychotherapists use to help patients: Denial, Depression, Anger, and Acceptance. Most of us have experienced the first three of these stages in relating to the crisis in Israel. In the beginning, we were in denial, we then became depressed at the gravity of the tragedies, and we were definitely angry at the Arab terrorists. Under regular circumstances, a normal and healthy grief process concludes with acceptance, which enables the mourner to continue and move on with his life. This is vital for any mourner.

But for us to accept the situation in Israel, to stop feeling the reality of the pain, would be the biggest tragedy of all. Unfortunately, we are showing some signs of reaching this dreaded stage.

We sense that we are living in the most dangerous time period for the Jewish people since the Holocaust. The terror has no end in sight, and all the diplomatic and military solutions have failed to stop the attacks. Yes, we must be thankful to God for the hundreds of attacks that were supposed to happen but were thwarted. But, as we are aware, God does not directly bring terrorist attacks. They are the results of man’s free will used for evil.

Why does God sometimes allow the terrorists to succeed? He does so to inspire us to return to Him, to cry out to Him, to improve our service of Him, and to realize we need Him.

As Maimonides (Laws of Fast Days 1:1-3) writes: “It is a biblical commandment to cry out to God whenever a crisis develops. This is one of the paths of repentance. When tragedy strikes, and we turn to God in prayer, knowing clearly that our failings and misdeeds have permitted the crisis to occur and are the reasons why God has not saved us, these prayers and cries will cause the removal of the crisis.” (paraphrased)

This is the purpose of turning to God for deliverance and salvation. We need God to save us, and our spiritual growth brings God’s protection.

If we accept the murders in Israel as a reality of our existence, and fail to let them shake us to our core and improve our spirituality, we squander the opportunity to ultimately end the killings in Israel.

What is the solution?

The answer would appear to be the following. No rabbi needs to give a sermon in order to inspire his community to eat matzah on Passover. And no rabbi feels compelled to tell his congregants about the importance of coming to hear the shofar on Rosh Hashana. Why not? Because rituals that occur once a year have a dramatic, emotional, even sentimental appeal to us. Strengthening the intensity for such mitzvot is unnecessary. It comes naturally.

On the other hand, Torah study, good deeds, prayer, and integrity in the workplace are challenges we face every day. Anything that we do constantly will automatically and necessarily fail to carry a natural intensity. We know intellectually that Torah study is of supreme importance, and that every word of our prayers has the power to change reality, but it’s hard to maintain these actions without growing stale to them. Anything that we do all the days of our lives, all the time, loses its drama and glory.

This is exactly the issue the Talmud is addressing. The only way is to constantly inspire oneself. As Rashi there explains: “A person must continuously strengthen himself with all his energy.” There are two keys that Rashi mentions: continuity, and with all one’s energy.

In order to succeed in the four areas the Talmud lists, there must be a daily, continuous, concerted, and energetic effort to inspire oneself. Passion will not happen by itself.

In our tumultuous time period, it seems that we need to add a fifth item to the Talmud’s list: Remembering the Crisis in Israel.

Similarly, the constant violence in Israel has made us lose sensitivity to the tragedy. We have become “used to” Jews dying on a regular basis. We therefore fail to become shocked when hearing of these tragedies. Only through daily strengthening, as the Talmud suggests, can we maintain the proper emotion of grief. And only through continual reminders will we strive for spiritual improvement in order to help prevent the attacks.

In our tumultuous time period, it seems that we need to add a fifth item to the Talmud’s list: Remembering the Crisis in Israel. We must, on a daily basis, set aside time (even if only for a brief moment) to reflect on the scope of the tragedies, on the hundreds of dead, on the thousands of serious and permanent injuries, on all the grieving families, and on ways we can improve and grow in order to create merits to earn God’s protection.

Whether it is praying with more intensity, performing a special daily kindness, being more careful in the workplace, or an extra Torah study session, we have all accepted things upon ourselves in order to create merits as a result of the tragedies in Israel. What we now need is to monitor ourselves and make sure we are continuously and consistently performing this growth with all our energy and effort.

And if after all this, we still cannot muster the strength to feel the full extent of the tragedies, we run the terrible risk of accepting the crisis as a normal part of our reality. And if God forbid that were to occur, is that not itself the biggest reason to cry?